Setting aside the absurdity of appellant’s argument that [Det.] Williamson should have left a running vehicle, which was abandoned by a fleeing suspect, parked in the driveway of an unrelated third party until the titled owner could be contacted and made to come retrieve the vehicle … we hold that the vehicle was lawfully impounded, and the inventory search was reasonable as an exception to the constitutional prohibition on warrantless searches.

On Friday March 15, 2019 at 11:30 a.m. Detective Tracey Williamson of the Bryan City Police Department responded to a call of a person unconscious in a vehicle. When Det. Williamson arrived, she observed Mr. Andrew Kendall in the driver’s seat of a Chevy Lumina, slumped over the steering wheel. The car was not on, but the keys were in the ignition. Det. Williamson knocked on the door, but Mr. Kendall did not respond. Det. Williamson then opened the door and nudged Mr. Kendall, at which point he became alert. Det. Williamson checked on the status of his driver’s license and learned that it was suspended. Det. Williamson also testified that earlier, during her shift brief, she received information from Defiance County that Mr. Kendall may have been sold or knew the location of a stolen handgun.  The Sixth District Appellate Court will later learn that Mr. Kendall was chock full of probable cause.

After Mr. Kendall woke up, Det. Williamson initiated a conversation with him to determine if he was okay, why he was there, and who owned the Lumina. Det.  Williamson, stated Mr. Kendall could not remember the name of the person who owned the car. Det. Williamson later learned through dispatch that the car was registered to M.M. [M.M.’s full name has been redacted]  Mr. Kendall told Williamson that the car was not starting properly, and that he was working on it for the owner. Even at this juncture the owner of the vehicle could not be recalled.  Perhaps Mr. Kendall was a good Samaritan?  Or perhaps not.

As part of the interaction, Det. Williamson attempted to determine if Mr. Kendall was under the influence of drugs or alcohol. Det. Williamson led Mr. Kendall to the sidewalk and asked him to perform some field sobriety tests, following which Det. Williamson determined that Mr. Kendall appeared sober. However, Det. Williamson testified that she smelled raw marijuana on Mr. Kendall, and observed “green stuff” in his fingernails, which in her experience could have been marijuana. In law enforcement parlance this is called a ‘clue’.  Mr. Kendall explained that he worked security for a marijuana growing operation in Michigan, but that he did not “mess with it,” to which Det. Williamson rhetorically asked “well why is it on your hands?” Notably, the timing of Det. Williamson’s observations about marijuana in the sequence of events is not clear from her testimony.  Later the Sixth District Appellate Court determined that lack of clarity of timing was insignificant when determining Mr. Kendall was walking probable cause. [Walking probable cause is NOT an actual legal doctrine but a term of art found on Objectivelyreasonable.com and in many of my presentations.]

Bryan Police Officer John Rathke conducted the search of Mr. Kendall’s person. Officer Rathke found a pair of tweezers in Mr. Kendall’s pocket, which Det. Williamson testified are often used to hold a marijuana joint so that the user does not burn his or her fingers. Officer Rathke also looked through the window of the Chevy Lumina and observed what looked like a burnt marijuana cigarette on the center of the floor in the front of the car.

At that point, Det. Williamson determined that she had probable cause to search the Lumina based on the smell of marijuana, the tweezers, the burnt marijuana cigarette, and Mr. Kendall’s inability to explain who owned the vehicle. During the search, Det. Williamson discovered a digital scale and little plastic zip lock baggies on the passenger seat. The trunk was accessible from the inside of the car, and there was a box that had mail with Mr. Kendall’s name on it.  In a sequence of inexplainable oddities a box with HIS name on it was nestled in the trunk.  Behind the driver’s seat was a black coat that had in one of its pockets a plastic baggie with a white powdery substance. The white powdery substance tested positive for methamphetamine. Hence, he was messing with Meth. Perhaps Mr. Kendall always kept his meth in a box with his name on it in case he misplaced it or for purposes of sentencing.  Whatever his rationale he did not lose the box AND it was used for sentencing.

Mr. Kendall was then taken to the police station. At the station, Williams County Sheriff’s Deputy Michelle Jacob identified the black coat as belonging to Mr. Kendall because she had seen him wearing it before. Det. Williamson also eventually talked to M.M. who informed Det. Williamson that she sold the Chevy Lumina to Mr. Kendall, and he paid for it, but he did not return the license plates to her, so she never signed the title over to him. 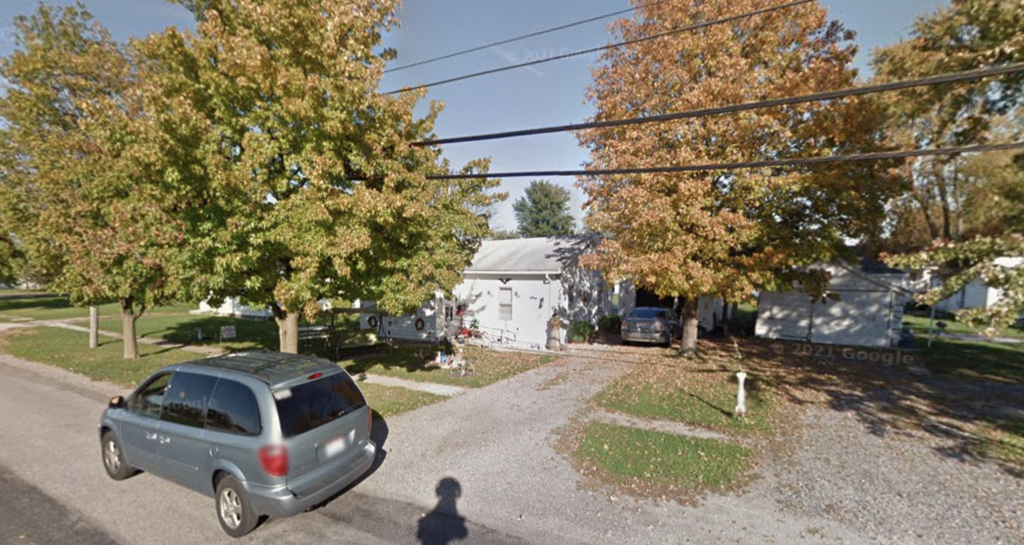 This is the driveway at 612 North Walnut Street, Bryan, Ohio where Andy Kendall fled out of his well known Chevy Lumina.  He would later argue that since the car was legally parked in a driveway of a person unknown to him, law enforcement could not impound the Lumina.  The Sixth District Court called this argument ‘absurd’.

After other officers arrived to search for Mr. Kendall, Det. Williamson began to search the Chevy Lumina as an inventory search because the car was going to be towed. As justification for towing the vehicle, Det. Williamson stated that Mr. Kendall was driving on a suspended license, and that Mr. Kendall owned the car but it was registered in someone else’s name with someone else’s license plates. Det. Williamson stated that it is the police department’s policy to seize and tow the vehicle when the owner is driving it under a suspended license.

Inside the vehicle, Det. Williamson discovered a backpack on the front passenger floor board that had a metal container with a white powdery substance that tested positive for methamphetamine. His second time in ten days Mr. Kendall was messing with Meth.  In addition, the car contained a cell phone, a jar with marijuana leaves, a cap for a syringe, a shirt with a used syringe, baggies, scales, and knives. The car was loaded with more contraband than a police academy training scenario.

On Friday May 3, 2019 Williams County Deputy Sheriff Matthew Zook arrested Mr. Kendall pursuant to an arrest warrant. During the arrest, Dep. Zook conducted a search of Mr. Kendall, and recovered Mr. Kendall’s wallet. Inside the wallet was $835 arranged with multiple bills folded into increments of $100. Dep. Zook testified that in his experience, this method of sorting money was consistent with drug trafficking. Dep. Zook asked Mr. Kendall if he had anything else on him that he was not supposed to have, and Mr. Kendall replied that he did not.  This exchange is foreshadowing that Mr. Kendall was lying.

Dep. Zook then transported Mr. Kendall to the Corrections Center of Northwest Ohio, where the intake officer conducted a more thorough search. Dep. Zook was present when the intake officer discovered a small plastic baggie in Mr. Kendall’s back pocket, which contained a substance later determined to be approximately .24 grams of methamphetamine. This would be the last time for a loooong time that Mr. Kendall was messing with Meth.

Mr. Kendall was indicted for three counts of Aggravated Possession of drugs, one count of Aggravated Trafficking in Drugs and one count of Illegal Conveyance into a Detention Facility.  Mr. Kendall filed a Motion to Suppress which the trial court denied.  Thereafter Mr. Kendall went to trial on counts and was found guilty on all counts.  He filed an appeal to the Sixth District Appellate Court which denied each of his appeals but for one that focused on the cost of his court appointed attorney and court courts which will not be evaluated in this article.  Each of his appeals that focused on the actions of law enforcement was denied.  Mr. Kendall was sentenced to eleven to fourteen- and one-half years in prison, which was upheld.

Information for this article was obtained from State v. Kendall, 2021 – Ohio – 1551.  This case was issued by the Sixth District Ohio Appellate Court and is binding in Erie, Fulton, Huron, Lucas, Ottawa, Sandusky, Williams and Wood Counties.