In July 2018 Trooper Shane Morrow clocked a motor vehicle driving in excess of the speed limit in Richland, County, Ohio. He stopped the vehicle and completed a passenger-side approach. The vehicle was a small hatchback car, and all he could see was a driver, a front seat passenger, and luggage stacked to the roof. Tpr. Morrow detected the odor of burnt marijuana emitting from the vehicle and while speaking with the driver, noticed the driver’s “speech was slurred and he was possibly impaired.” He had the driver exit the vehicle and conducted a pat-down for weapons. Tpr. Morrow could smell the odor of burnt marijuana on the driver’s person. Eventually the front seat passenger was removed from the vehicle and a pat-down was conducted on that individual as well. About five minutes after Tpr. Morrow stopped the vehicle, another trooper arrived to assist.

Based on the odor of burnt marijuana, Tpr. Morrow conducted a search of the vehicle for any marijuana. Almost immediately he found a plastic bottle containing what he believed to be marijuana, and what he suspected was “an electronic smoking device.” After searching the front of the vehicle for a few minutes, Tpr. Morrow detected a passenger in the rear of the vehicle surrounded by the luggage. The rear passenger was later identified as Mr. Michael Noteboom, appeared to be passed out and sleeping. After waking up, Mr. Noteboom was removed from the vehicle, patted down for weapons, and searched. Tpr. Morrow testified that Mr. Noteboom was searched because of the “odor of burnt marijuana emitting from the passenger compartment” and the “found contraband loose within the vehicle.” The marijuana found in the vehicle was within Mr. Noteboom’s arm reach. Tpr. Morrow testified that exigent circumstances existed to search appellant’s person. Mr. Noteboom “possibly could have contraband on his person that could be destroyed or tampered with, or he could also ingest while we are up searching the vehicle and then harm himself.” Upon searching Mr. Noteboom’s person, Trooper Morrow found a plastic bag in his pants pocket containing smaller bags each holding “a brown powder.”  That brown powder would later test positive for heroin. At that point, Mr. Noteboom was placed under arrest and handcuffed. A backpack was found near Mr. Noteboom that contained more heroin, marijuana, cocaine and his California driver’s license. Tpr. Morrow did not detect an odor of marijuana on Mr. Noteboom.

Mr. Noteboom filed a Motion to Suppress the search of his person and backpack which the trial court denied.  He plead No Contest, was found guilty and sentenced to eleven years in prison.  He appealed the denial of the Motion to Suppress to the Fifth District Appellate Court which held “Although we do not find the search of appellant’s person was justified, we find the inevitable discovery rule to apply. Under the inevitable discovery rule, “illegally obtained evidence is properly admitted in a trial court proceeding once it is established that the evidence would have been ultimately or inevitably discovered during the course of a lawful investigation.”. Nix v. Williams, 467 U.S. 431 (1984).  Consequently, California Mike will be in Ohio for eleven years. 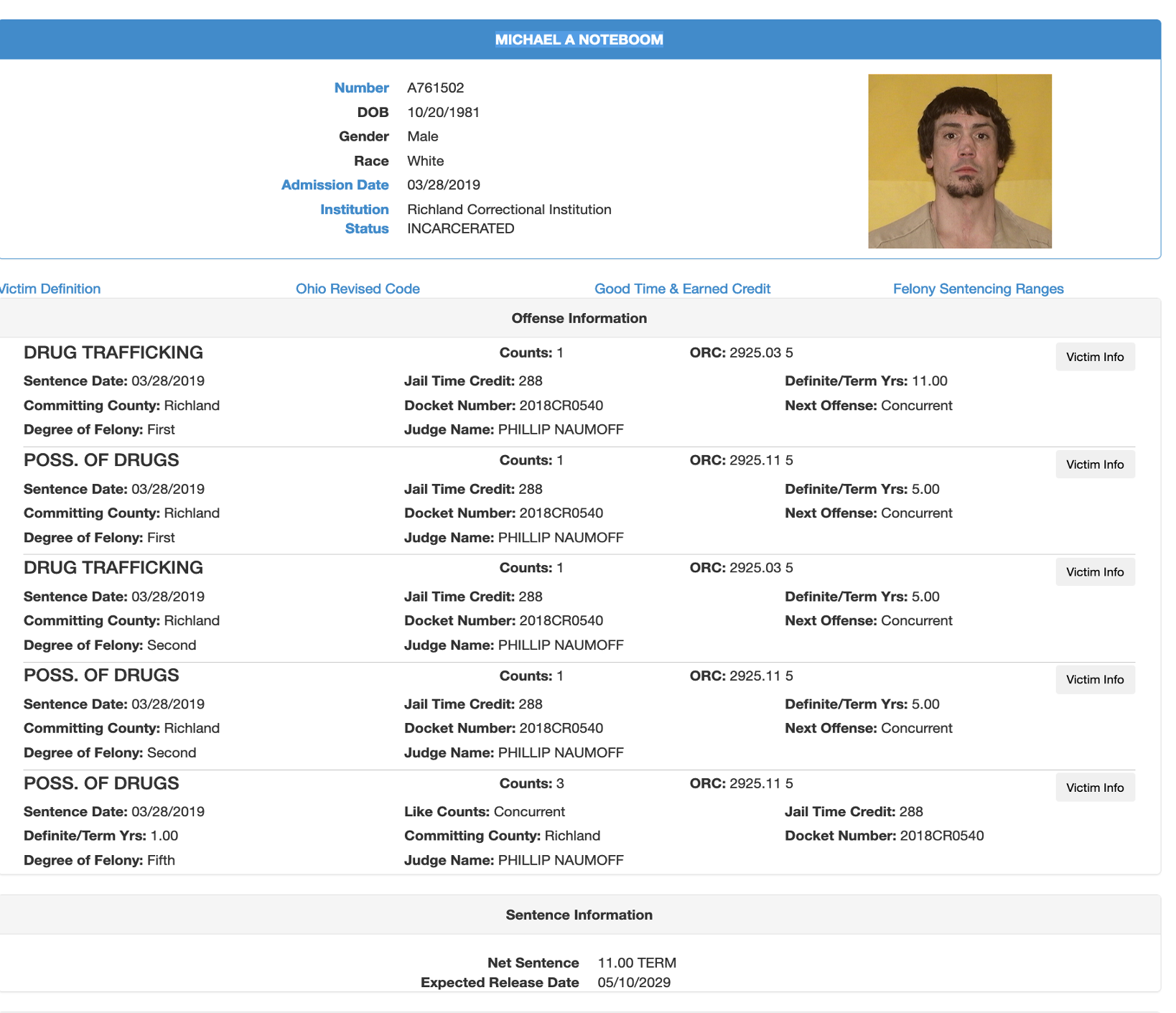