Chalk Up Another Win for Alison and the Fourth Amendment

[W]e hold that the administrative-search exception does not justify the City’s suspicionless chalking of car tires to enforce its parking regulations.

Ms. Alison Taylor received fourteen parking tickets between July 10, 2014 and September 14, 2016 from the City of Saginaw for leaving her car in its downtown area beyond the time she had paid. Each time, Parking Enforcement Officer [PEO] Tabitha Hoskins chalked the tire of Ms. Taylor’s vehicle several hours before issuing the ticket. Every ticket noted the time Ms. Taylor’s vehicle was first “marked” with chalk in the regulated area. PEO Hoskins also documented the ticket with one or more photographs of the offending vehicle.  Ms. Taylor had two vehicles that were ticketed a total of fourteen times.  One was a Mercury Mountaineer bearing Michigan BAS 970 and the other was a Toyota 4 Runner bearing Michigan CFL 0326. 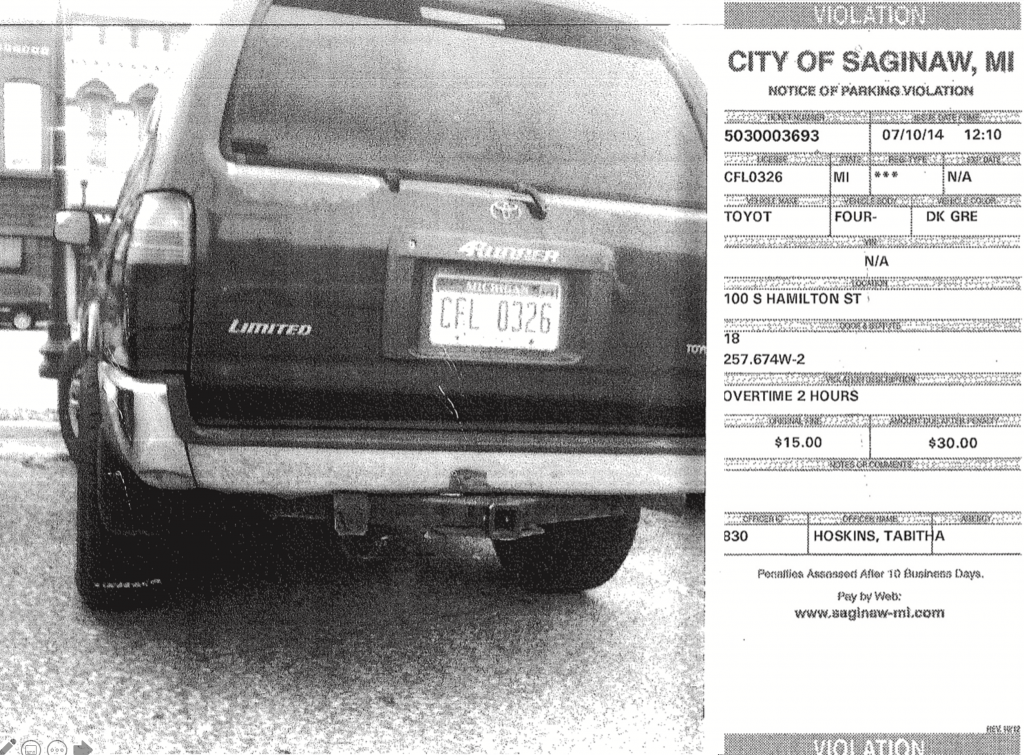 On July 10, 2014 Ms. Taylor received her first parking ticket that was part of this lawsuit, for parking past the time paid at 100 South Hamilton Street in Saginaw, Michigan.  There is a chalk mark clearly visible on the rear driver’s side tire. 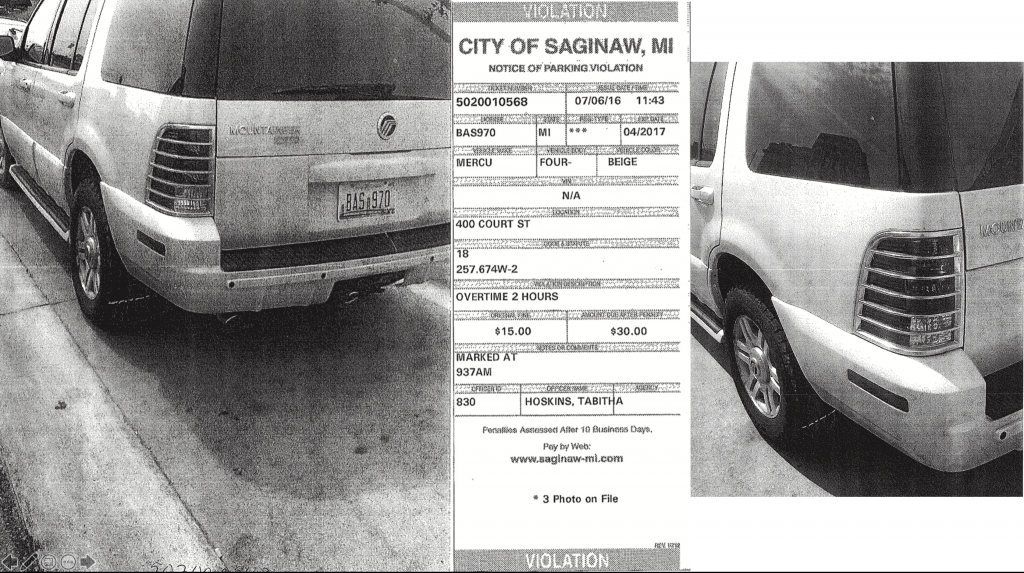 PEO Tabitha Hoskins should be commended for being so consistent and thorough for observing and citing the parking violations in Saginaw, Michigan.  This is a photo of Ms. Taylor’s Mercury Mountaineer.  Ms. Taylor can also be recognized for being consistent.

On April 5, 2017 Ms. Taylor filed a §1983 Deprivation of Civil Rights lawsuit against the City of Saginaw, Michigan and PEO Hoskins in the Eastern District of Michigan Federal Court.  Ms. Taylor alleged that the chalking of her tires violated her Fourth Amendment Rights. The City of Saginaw filed a motion to dismiss the claim claiming that the exception to the Fourth Amendment, the Community Caretaking Doctrine, permitted the parking enforcement officer to chalk tires of vehicles suspected of violating the parking ordinances.

On April 22, 2019 the Sixth Circuit Appellate Court held “[O]n these facts and on the arguments the City proffers, the City fails to meet its burden in establishing an exception to the warrant requirement.”.  The court determined that chalking a tire was a violation of the Fourth Amendment “[T]his physical intrusion [chalking the tire], regardless of how slight, constitutes common-law trespass. This is so, even though “no damage [is done] at all.”.  The court sent the case back to the Eastern District of Michigan Federal Court for litigation as to whether Ms. Taylor would be compensated with money FROM the City of Saginaw rather than Ms. Taylor PAYING the City of Saginaw for the fourteen traffic tickets she received.

The City of Saginaw appealed again, this time claiming that chalking the tires is permitted under another exception to the Fourth Amendment, the Administrative Search exception.  The Sixth Circuit once again chalked up another decision in favor of Ms. Taylor and against the City of Saginaw.  In this second case the Sixth Circuit held “[W]e hold that the administrative-search exception does not justify the City’s suspicionless chalking of car tires to enforce its parking regulations.”.

This case was issued by the Sixth Circuit Court of Appeals which is binding in Kentucky, Michigan, Ohio and Tennessee.

Does your agency train on the Admistrative Search Doctrine?