Miranda – Both a Noun and a Verb

Saturday June 13, 2020 marked the 54th Anniversary of the Miranda decision.

On March 2, 1963 an eighteen-year-old female had finished working at the Paramount Theatre in Phoenix, Arizona.  That night the new movie The Longest Day was shown.  It was now after midnight, the early morning hours of March 3, 1963, she rode the public bus to a stop near her home.  As she stepped off the bus and began to walk home a car abruptly pulled into a driveway stopping her.  The driver, later identified as Ernesto Miranda who the U.S. Supreme Court held did not understand his constitutional rights, did understand how to kidnap and subsequently rape this teenage girl. Just to complete the humiliation he also stole the eight dollars she had in her purse.  Mr. Miranda drove her to the desert to rape her then he drove her home and as she was about to get out of the car he said “Whether you tell your mother what has happened is none of my business, but pray for me.”.

Detective Carroll Cooley and Detective Wilfred Young would lead the investigation and based on counter surveillance conducted by the victim’s cousin obtained a partial license plate, which led the detectives to 2525 West Mariposa Street, Phoenix, Arizona 85017 where the 1953 Packard bearing Arizona DFL 317.  Mr. Miranda voluntarily went with the detectives to Phoenix Police headquarters and placed in Interview and Interrogation Room #2.  He signed a waiver that stated in pertinent part “I Ernesto Miranda, do hereby swear I make this statement voluntarily and of my own free will, with no threats, coercion, or promises of immunity, and with full knowledge of my legal rights, understanding any statement I make may be used against me.”.  The U.S. Supreme Court would later hold that this statement was violative of the Fifth Amendment.   After signing this waiver Mr. Miranda provided a confession of the kidnapping and rape.  He went to trial and was convicted of Kidnapping, Rape and Robbery [from an early felony].  Judge Yale McFate sentenced Ernesto Miranda to twenty to thirty years for all of the felonies and the sentences would run concurrently.

The Arizona Supreme Court upheld the convictions “We hold that a confession may be admissible when made without an attorney if it is voluntary and does not violate the constitutional rights of defendant.”.  Mr. Miranda appealed again to the U.S. Supreme Court and on Monday February 28, 1966 oral arguments were held.  On Monday June 13, 1966 the U.S. Supreme Court overturned Mr. Miranda’s conviction concluding law enforcement MUST provide the following ‘rights’ to the suspect if they are in custody AND they are subjected to interrogation: 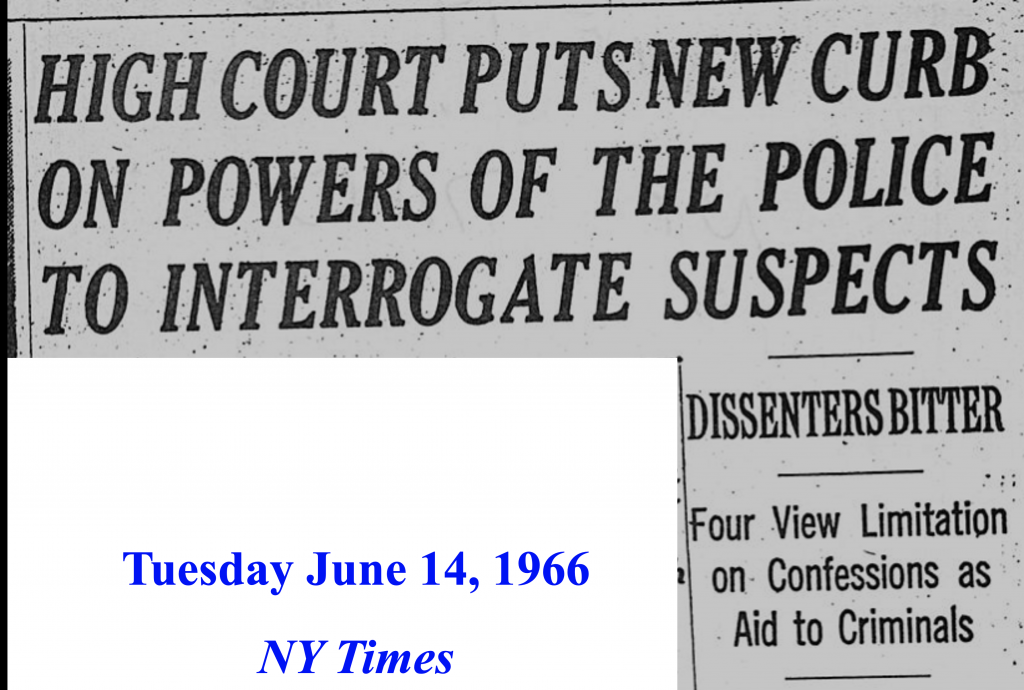 Henceforth every custodial interrogation nationwide would be different … very different.  Suspects would have to be informed of their constitutional rights before law enforcement could ask about a crime the suspect allegedly committed.  Initially, law enforcement responded by issuing front line officer Miranda cards with the rights prepared to be recited to recidivists who often could recite each without a card.

Whatever happened to Mr. Miranda?  His conviction was overturned, and he was re-tried on all charges.  On June 13,1967, exactly one year after the U.S. Supreme Court overturned his initial conviction, he was convicted of Kidnapping and Rape and sentenced to him again to twenty to thirty years in prison.  He would be paroled just seven years later in December 1972.

On January 31, 1976 Ernesto Miranda was playing poker at the La Ampola bar in downtown Phoenix, Arizona.  Mr. Miranda won two dollars during a hand in poker and then went to the restroom.  Upon his return he was stabbed in the chest and neck and died on the floor of the La Ampola bar.  His alleged killer, Fernando Rodriguez was quickly apprehended and transported to the Phoenix Police headquarters and placed in Interview and Interrogation Room #2; the very room Mr. Miranda was interviewed.  Mr. Rodriguez was read his Miranda rights and requested a lawyer.  Phoenix Police did not have enough probable cause to charge him, so he was released while the investigation continued.  Phoenix police did obtain enough probable cause and charged Mr. Rodriguez but he has yet to be found.