Can a Person ‘Trespass’ on Government Property?

And it would be a reasonably prudent assumption by anyone that a government agency is not open for business at 11:15 p.m. on a weekend. Thus, the odd hour lent further legitimacy to Deputy Martin’s belief that the vehicle was trespassing. Additionally, when Deputy Martin pulled into the main driveway to BCI’s parking lot, he passed two signs, placed on both sides of the road, that warned, “No Trespass” and cited the trespassing section of the Revised Code.

A Madison County grand jury indicted Ms. Ashley Dunn on two counts of illegal conveyance of drugs, one count of trafficking, and one count of aggravated trafficking. The charges arose after Madison County Sheriff’s Deputy Tyler Martin, responding to a report of trespassing in the parking lot of Ohio’s Bureau of Criminal Investigation (“BCI”), encountered Ms. Dunn sitting in a vehicle in that parking lot. After arresting Ms. Dunn on a pre- existing warrant, Deputy Martin recovered a drone and narcotics in Ms. Dunn’s vehicle. A subsequent investigation revealed that Ms. Dunn had been involved in planning to deliver narcotics to her boyfriend, who was incarcerated in the Madison Correctional Institution – located across the street from BCI – by drone delivery.

Motion to Suppress and Hearing

Deputy Martin testified that on Saturday April 17, 2021, at approximately 11:15 p.m., a Madison County Sheriff’s Office dispatcher directed him to investigate a suspicious vehicle parked in BCI’s parking lot in London, Ohio. The state played the recording of the call that led to the dispatch. On it, an individual who identified himself as a BCI employee reported to the dispatcher that a Honda Pilot was parked in BCI’s “front” parking lot, and that the employee did not recognize the vehicle. The employee reported that the vehicle’s lights were on. 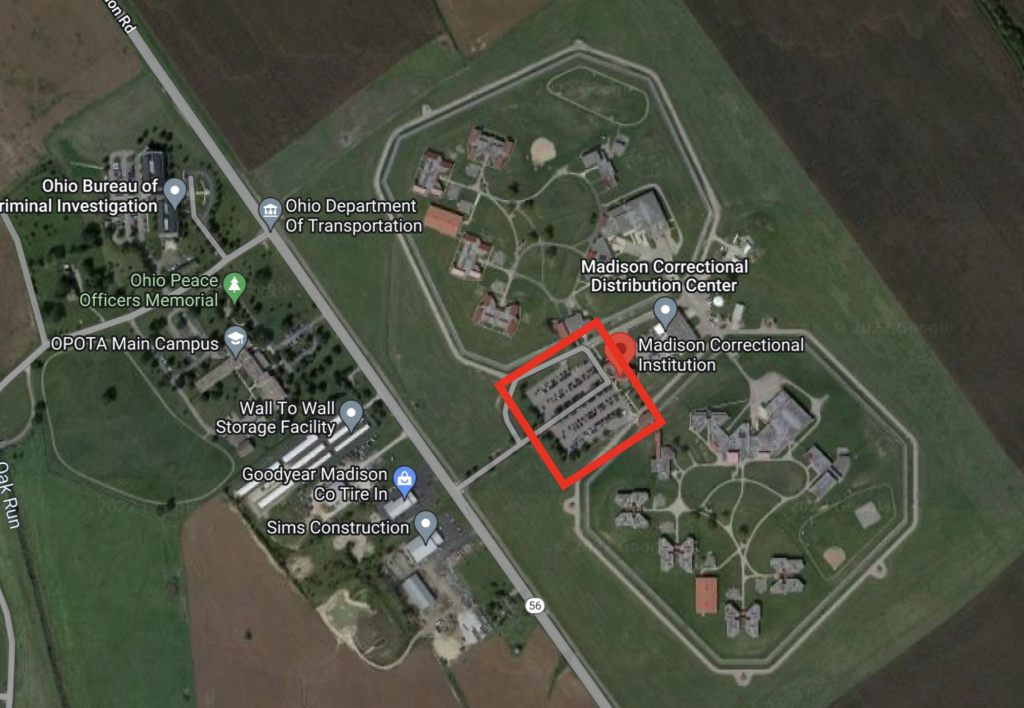 Madison County Deputy Tyler Martin was dispatched to a suspicious vehicle parked outside of the Madison Correctional Institution just after 11pm.  There he discovered Ms. Ashley Dunn in a Honda Pilot and she had narcotics and a drone.  Ms. Dunn was arrested, charged and convicted.  But was the deputy’s investigative detention lawful?

Deputy Martin testified that the dispatcher relayed to him that the BCI employee—whom Deputy Martin identified as a security guard—had reported that “we have a vehicle that’s parked in our parking lot we don’t recognize” and had provided a description of the vehicle. The second call from the BCI employee was also played at trial.

Deputy Martin responded to the parking lot a few minutes after receiving the dispatch. As he was passing the parking lot on the main road that leads to BCI, he observed the Honda Pilot. It was parked at the end of a line of state vehicles and was the only vehicle in that row that had its headlights and taillights illuminated. Deputy Martin turned off the main road and pulled into the driveway that leads to BCI and other government facilities, including the London Correctional Institution. Deputy Martin observed two large “No Trespass” signs as he drove down the driveway. Both signs cited the Revised Code section for trespassing. 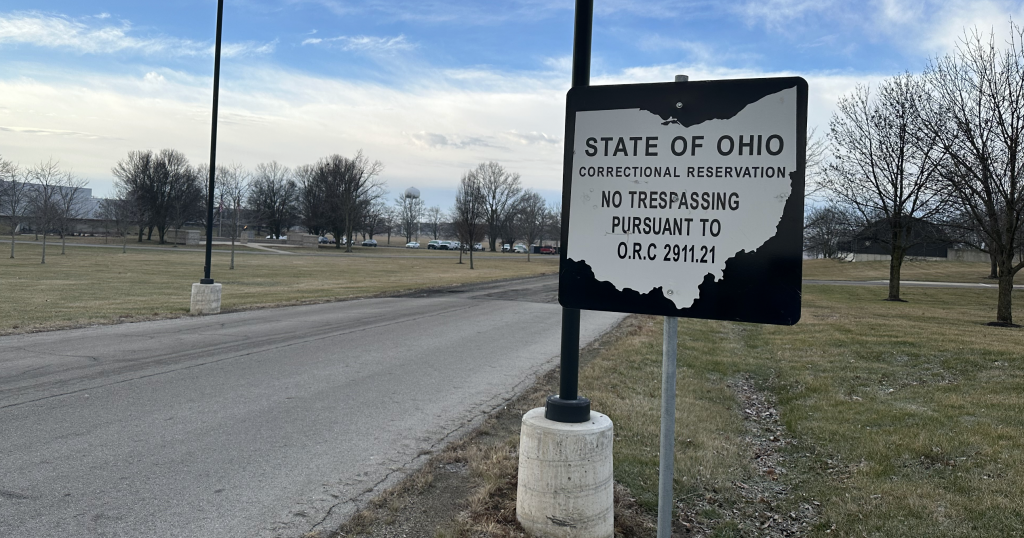 Ms. Ashley Dunn drove passed this sign with her drone and narcotics on Saturday April 17, 2021.  Was this sign enough legal notification that she was ‘trespassing’?

The remainder of the encounter is not relevant for purposes of this appeal, but we will briefly summarize the events. Deputy Martin questioned Ms. Dunn. She eventually provided him with her identifying information, from which Deputy Martin was able to determine that Ms. Dunn had an active warrant. Deputy Martin arrested Ms. Dunn on the warrant. Afterwards, a K9 officer detected the presence of narcotics in the vehicle and law enforcement searched the vehicle. Law enforcement recovered narcotics and a drone.

Following the suppression hearing, the trial court issued a written decision denying Ms. Dunn’s motion to suppress. Relevant to this appeal, the trial court observed that the security camera footage of the stop was inconclusive as to whether Deputy Martin had used his police vehicle to completely block Ms. Dunn’s vehicle from leaving. As a result, the trial court found that “[G]iven the state of the evidence,” the court could not find that Ms. Dunn’s path was blocked by Deputy Martin’s vehicle. As a result, the court found that the interaction between Ms. Dunn and Deputy Martin was a consensual encounter and therefore no Fourth Amendment or state constitutional protections were implicated.

The court further found that even if the encounter was not consensual, it was a lawful, justified Terry stop because Deputy Martin had a reasonable articulable suspicion that Ms. Dunn had committed a trespass offense. As such, the court concluded that Deputy Martin could briefly detain Ms. Dunn for purposes of investigating the trespass offense without violating the Fourth Amendment or state constitutional protections.

Following the denial of her motion to suppress, Ms. Dunn pleaded no contest to the indicted counts. The court accepted the plea and later sentenced Ms. Dunn to a prison term. Ms. Dunn appealed, raising two assignments of error. We address Ms. Dunn’s second assignment of error first.

Ms. Dunn contends that the trial court erred in denying her motion to suppress because Deputy Martin had no reasonable basis to form a suspicion that Ms. Dunn was engaged in criminal activity.

Ms. Dunn contends that Deputy Martin lacked sufficient information to reasonably suspect that she lacked permission to park her vehicle on BCI’s grounds or that she would have knowledge that she was trespassing. We disagree.

But the BCI employee’s report was not the only information available to Deputy Martin. Deputy Martin testified that he was familiar enough with BCI to know that the time of the suspected trespass – Saturday at 11:15 p.m. – was not within BCI’s normal business hours. And it would be a reasonably prudent assumption by anyone that a government agency is not open for business at 11:15 p.m. on a weekend. Thus, the odd hour lent further legitimacy to Deputy Martin’s belief that the vehicle was trespassing. Additionally, when Deputy Martin pulled into the main driveway to BCI’s parking lot, he passed two signs, placed on both sides of the road, that warned, “No Trespass” and cited the trespassing section of the Revised Code.

Deputy Martin further testified that he was aware that Madison Correctional Facility was across the street from the BCI parking lot and that less than two weeks prior to this incident, he had been dispatched to the same parking lot to investigate a vehicle involved in a “suspected conveyance” to the Madison Correctional Institute. Deputy Martin testified that throughout his career, he had investigated several instances of criminal activity on or around the prisons in Madison County. Given the proximity in time to the most recent conveyance investigation, the location, the time of day, and the BCI employee’s suspicion about the vehicle, Deputy Martin also could have reasonably suspected that the trespassing vehicle may have been involved in an attempt to convey contraband to the two nearby prisons.

The foregoing more than demonstrates that Deputy Martin possessed specific and articulable facts, which, when taken together, with rational inferences from those facts, reasonably warranted him in suspecting that a criminal trespass offense was occurring on BCI property, and which justified him in briefly detaining Ms. Dunn for purposes of investigation.

Based on the totality of the circumstances presented, we find that Deputy Martin had more than an undeveloped suspicion or hunch that Ms. Dunn was trespassing. Based on the following facts admitted at the hearing, we conclude that Deputy Martin’s suspicions of criminal activity were reasonable and articulable.