Was Joe’s Busking and Profanity Protected by the First Amendment?

Sgt. Colon concedes that busking is permitted at the shopping center such that others could be prosecuted but generally are not. In light of the fact that Mr. Workman’s arrest and prosecution were solely dependent on his exercising rights guaranteed under the First Amendment … we conclude that Mr. Workman’s conviction for a violation of W.C.O. 509.09(A) was impermissibly based on selective prosecution, an attempt to secure a conviction for any crime based solely on Mr. Workman’s exercising his First Amendment rights.

The Woodmere Police Department is located across the street from the Eton Shopping Center, a shopping complex that contains a Starbucks establishment. 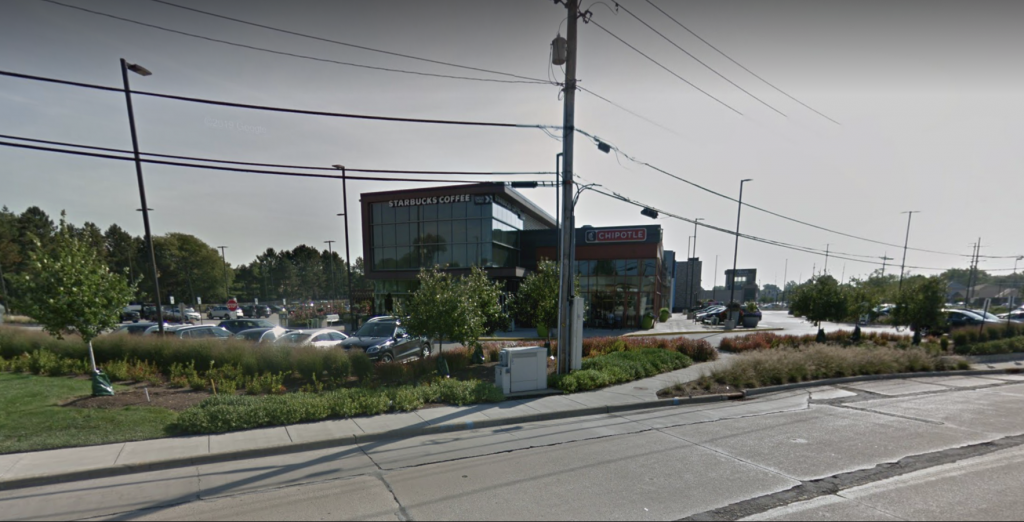 Mr. Joseph Workman engaged in busking and profanity near the Starbucks Coffee shop at 6 a.m. in December 2019.  This Starbucks is located at 28053 Chagrin Boulevard, Woodmere, Ohio.  Were both of these activities lawful?

At 6 a.m. in December 2019, Officer Sean Lemiec, a part-time officer for Woodmere Police, responded to a solicitation complaint from Starbucks. Officer Lemiec drove to the scene, at which time he heard music coming from the location. Upon arriving, Officer Lemiec approached a male later identified as Mr. Joseph Workman, who was standing with an electric guitar attached to an amplifier that was inside his backpack. A person who plays music on the street is known as a Busker or is Busking.  As Officer Lemiec approached, Mr. Workman was between the public sidewalk and the parking lot adjacent to the Starbucks, on a concrete pathway connecting the public sidewalk to the crosswalk leading across the parking lot.

After obtaining Officer Lemiec’s name and badge number, Mr. Workman asked to speak with a supervisor, who had coincidentally appeared off camera, or was already present, because Officer Lemiec responded by saying, “he’s here.” That supervisor was Sergeant Christopher Colon, a full-time officer for the Woodmere Police Department. Sgt. Colon testified to hearing Officer Lemiec’s discussion with Workman from across the street and he came to assist Officer Lemiec after it appeared that he was having difficulty. Sgt. Colon took over the conversation upon his announced arrival. Sgt. Colon advised Mr. Workman that the officers were responding to a noise violation, although the police report noted that the call received was for solicitation, not a noise violation. Sgt. Colon admitted at trial he had not received the call, nor was he aware of the nature of the response requested.

In response to Sgt. Colon’s assertion about the potential noise violation, Mr. Workman asked about the decibel limits for the noise violation, seeking clarification on whether he can play a guitar at a certain level or not at all based on Sgt. Colon’s assertion of the noise ordinances. The Village of Woodmere’s noise ordinances are dependent on noise that exceeds a certain decibel level without regard to the time of day. See W.C.O. Chapter 519. The only time limitations in those noise ordinances appear to impact the use of lawn equipment. Without responding to the inquiry directly, Sgt. Colon told Mr. Workman that the failure to comply with a police officer is an arrestable offense and that Mr. Workman had been ordered to not play the guitar. Mr. Workman then questioned Sgt. Colon’s claim, stating that Woodmere does not have a noise ordinance, to which Sgt. Colon reiterated that if Mr. Workman played the guitar again, he would be arrested.

At that point, Mr. Workman crouched down and began to put the guitar into his backpack that was being used as a guitar bag. He informed Sgt. Colon of that fact. As the guitar was being packed away, Mr. Workman told the officers that he intended to bring a legal action for their conduct that violated his rights. The conversation quickly degraded with Mr. Workman calling Sgt. Colon a “dummy,” “piece of shit,” and an “asshole” for what he perceived as his heavy-handed response, and Sgt. Colon urging Mr. Workman, in so many words, to “keep it up.” Sgt. Colon then informed Mr. Workman that if he kept “cussing,” he would be arrested — further prodding Mr. Workman to assert his First Amendment right to speak freely.

As Mr. Workman finished securing the guitar back into his bag and collected his five-gallon bucket and other belongings, Sgt. Colon told Mr. Workman that he was not going to do anything. To that, Mr. Workman responded: “Yeah, because you can’t because the First Amendment protects me you fucking s [inaudible].” One of the officers (it is not entirely clear who) asked, “you fucking what?” Mr. Workman continued: “First Amendment. The First Amendment, dude. You ever hear that one?” At trial, Sgt. Colon stated his belief that Mr. Workman was about to use a racially divisive term to describe his Hispanic heritage, claiming that Mr. Workman started to make an “sp” sound before cutting himself off. Officer Lemiec was not asked and did not offer his opinion on the matter. The audio is unclear, although a “s” sound can be heard, Workman never finished his thought, leaving any conclusions to the speculative determination of the listener.

As Mr. Workman was lying prone with his hands behind his back, Sgt. Colon told Mr. Workman, who appeared compliant in the video (although, his arms were out of the camera view), “don’t fucking move.” Mr. Workman again asked the reason for which he was being arrested. Sgt. Colon responded: “it’s called the asshole charge.” It appears that Sgt. Colon was referring to the Disorderly Conduct statute, O.R.C. §2917.11 in common parlance.  Only later did Sgt. Colon clarify that Mr. Workman was being arrested for Disorderly Conduct, a minor misdemeanor that is not itself an arrestable offense. For that matter, the alleged noise violation was not an arrestable offense either. The only offense allegedly committed before Mr. Workman was taken into custody that was not a minor misdemeanor was the charge of Obstructing Official Business under O.R.C. §2921.31(A), impeding a public official in the performance of an official duty, a second-degree misdemeanor. The resisting-arrest charge could arise only after Mr. Workman was placed under arrest and, therefore, could not be the basis for the arrest itself.

Importantly, the encounter was brief; approximately three minutes transpired between Officer Lemiec’s arrival and Mr. Workman’s arrest. In addition, Mr. Workman’s conduct demonstrated his willingness to comply with the officers’ direction notwithstanding his vocal, and at times crass, disapproval of the police response.

It appears that the latter two charges were predicated upon Mr. Workman’s alleged failure to comply with a lawful order from a police officer and Sgt. Colon’s comment during Mr. Workman’s arrest to “stop resisting.” The trial court, at the conclusion of a bench trial, found Mr. Workman guilty of the Disorderly Conduct and “Playing Of Radios, Boom Boxes, Tape Cassettes, Disc Players Or Any Other Sound Devices,” charges, but not guilty of the more serious, second-degree misdemeanor charges. In this appeal, Workman challenges both minor misdemeanor convictions.

Mr. Workman’s speech was vulgar, uncouth, and demeaning to the officers, but his actions demonstrated an intent to comply with their order to cease playing the guitar and to remove himself from the public space, and Woodmere has not claimed that Mr. Workman’s language produced a clear and present danger of a serious substantive evil. The issue became one of the spoken words. Mr. Workman’s verbal protestations can best be described as a begrudging acceptance of the officers’ authority and direction. Although the officers testified that Starbucks customers noticed the scene unfolding, Mr. Workman’s speech alone cannot sustain a violation of R.C. 2917.11(A), especially when his actions demonstrated a willingness to submit to the officers’ authority.

It has been “clearly established” under the First Amendment “that words alone cannot support probable cause for disorderly conduct—including profanity regarding police officers.” Had Mr. Workman’s action not indicated any intent to comply with the officers’ demand or clearly crossed into ethnic intimidation as statutorily defined, we may well have reached another conclusion since, at that point, the nonspeech element of the communication could form the basis of the disorderly conduct violation.

The Eighth District Court held “Importantly, the village failed to produce any persons who claimed that the music being played disturbed their quiet, comfort, or repose. But nevertheless, even if Eton Shopping Center permits buskers, they are all still subject to W.C.O. 509.09(A). Thus, Sgt. Colon concedes that busking is permitted at the shopping center such that others could be prosecuted but generally are not. In light of the fact that Mr. Workman’s arrest and prosecution were solely dependent on his exercising rights guaranteed under the First Amendment … we conclude that Mr. Workman’s conviction for a violation of W.C.O. 509.09(A) was impermissibly based on selective prosecution, an attempt to secure a conviction for any crime based solely on Mr. Workman’s exercising his First Amendment rights. With no other crime that could have been charged, all that was left was a minor misdemeanor crime that rarely, if ever, sees the light of a courtroom. We cannot condone the village’s wielding of perfunctory violations based on an attempt to curtail speech deemed unpalatable to the government actors. In light of the particular facts of this case, that slippery slope is far too steep. We reverse the decision of the trial court and vacate the convictions.”

This case was issued by the Eighth District Appellate Court and is only binding in Cuyahoga County, Ohio.

Does your agency train on the First Amendment and Disorderly Conduct?