Was Mike’s Repeated Profanity Unlawful or Protected by the First Amendment?

On Friday July 29, 2016, Mr. Michael Wood went to the Clark County Fair wearing a shirt that said “Fuck the Police.” Mr. Wood explained that he “wore the shirt because [he] ha[s] the constitutional right to do so.” While Mr. Wood claimed he had “no ill will or ill intent against law enforcement in general,” he took issue with how some of the county’s deputies had treated him in the past. The common denominator of the repeated contacts by Mr. Wood is not in question.  Specifically, Mr. Wood said to Sergeant Chad Eubanks had previously stopped him for a traffic infraction and said “something along the lines of, ‘I’ll mess you up.’” Mr. Wood also stated that he believed the Clark County Sheriff’s Office was “a cesspool” because so many officers who were not honorable servants” had been fired and “more exist[ed]” in the department. Mr. Wood also filed a Freedom of Information Act request regarding “a big fiasco about an affair, interoffice affair” in the department. 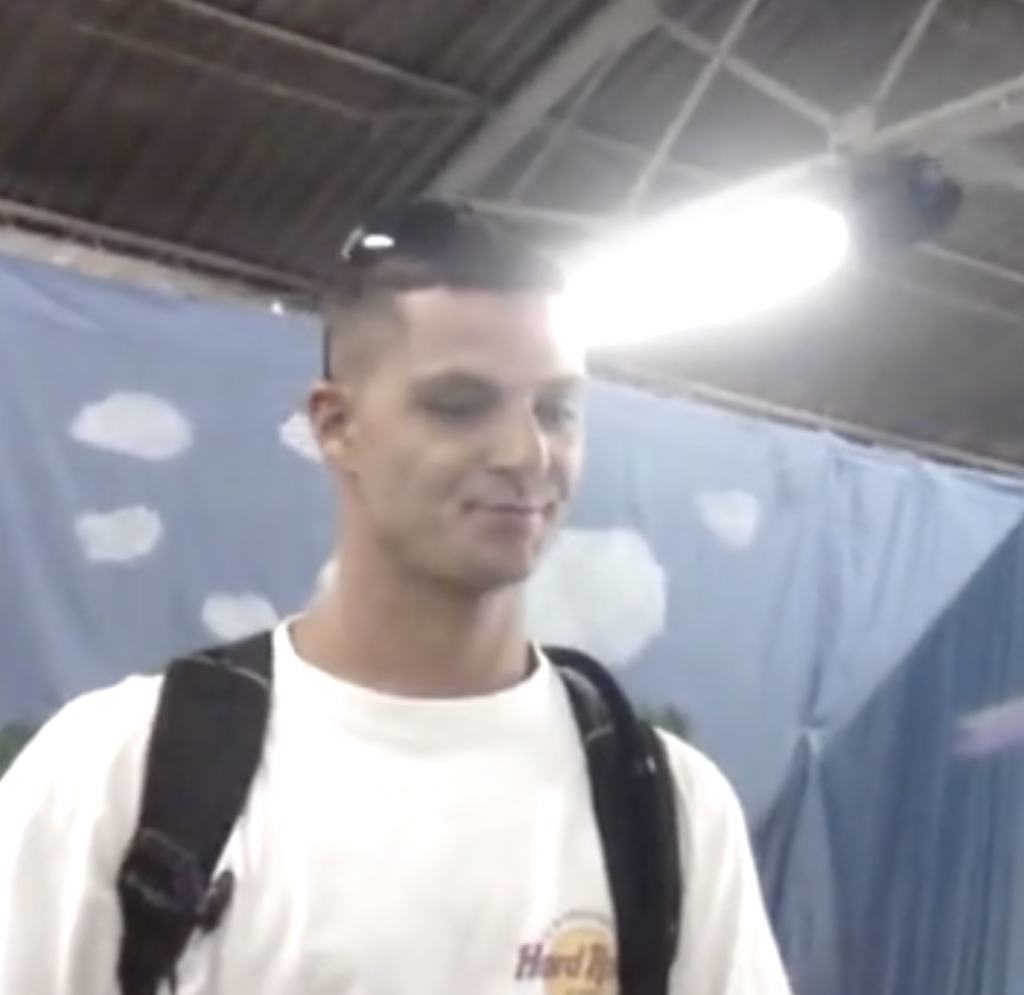 Mr. Michael Wood had changed shirts at the time the body worn camera was activated at this point in his numerous encounters with law enforcement.

Mr. Wood said that he received a few comments about his shirt at the fair, including a woman who made a profane gesture at him. Mr. Wood also claimed that a sheriff’s deputy yelled to him as he passed, “Hey, Wood, I like your shirt.” Mr. Wood “gave him a thumbs up” and said, “Yeah, I thought you might.”

A few hours after Mr. Wood arrived at the fair, the sheriff’s department received a call complaining about Wood’s shirt. Deputies Jacob Shaw, Mario Troutman, and Matthew Yates approached Mr. Wood and asked him to identify himself, but Wood declined to do so. Dep. Yates allegedly responded that the deputies “know who you are.” Mr. Wood attempted to record the interaction but stopped when “Troutman started laughing and pointing and said, ‘Huh, your light went out. You’re not recording anymore.’” At that point, Mr. Wood walked away.

Several hours later, the deputies were called to one of the buildings on the fairgrounds. Deputies Shaw, Troutman, and Yates were joined by Deputy Eubanks and Deputies Joseph Johnson and Cherish Steiger. Dean Blair, the Executive Director of the Clark County Fairgrounds, allegedly approached Mr. Wood first, saying, “Where’s this shirt? I want to see this shirt.”.

Deputies Troutman, Yates, and Johnson wore body cameras and filmed the subsequent events. As Deputy Yates walked closer to Mr. Wood and Mr. Blair, two other deputies entered the building from the opposite side. Mr. Wood was no longer wearing the profane shirt, and Mr. Blair asked Mr. Wood whether he had changed. Mr. Wood did not answer but asked Mr. Blair and the deputies if he had committed a crime or was being detained. Mr. Blair replied that he wanted Mr. Wood to leave, that Wood was “not welcome,” and that Mr. Wood needed to get off the fairgrounds. Mr. Wood agreed to leave if the three-dollar entrance fee was refunded. Mr. Blair gave Mr. Wood five dollars and told him to “keep the change” and never come back.” Mr. Wood replied, “I have change for you, sir,” but Mr. Blair refused to accept the money, telling Mr. Wood that he “wouldn’t take [Wood’s] money” and didn’t “want [Wood] around.”

Mr. Wood asked Mr. Blair whether he “realized what [Wood was] doing [wa]s a constitutionally protected activity.” Mr. Blair replied, “Not in my home.” Mr. Wood responded, “Not in your home? This isn’t your home. This is public property.” Eventually, Mr. Blair asked the deputies, “What [do] I have to say to him?” and reiterated to Wood, “Get off my grounds.” Mr. Wood responded, “Very well. I’ll be talking to my attorney about this.”

Deputy Troutman then allegedly pushed Mr. Wood’s shoulder, and Wood said, “You ain’t pushing me nowhere. I’ll leave.” Mr.Wood turned and began walking toward the open door, flanked by Mr. Blair and several deputies. While walking, Mr. Wood turned to face the deputies and repeatedly asked whether they had taken an oath to uphold the Constitution. Mr. Blair continued to repeat that Mr. Wood was “not welcome in [his] house.” At this point, Mr. Wood told the deputies not to put their hands on him and that Dep. Troutman had committed battery.

As the deputies escorted Mr. Wood outside, one of them told Mr. Wood that he had “been given an order to vacate the property. So you’re leaving.” Mr. Wood asked whether that was “a lawful order.” Mr. Blair and Mr. Wood exited the building and continued arguing, with Mr. Wood repeatedly stating that the fairgrounds were public property and Mr. Blair insisting that Mr. Wood leave. When Mr. Blair told Mr. Wood that he needed to leave because he had gotten his money back, Mr. Wood replied, “Five dollars ain’t shit to me, bro . . . Who the fuck do you think you are?” One of the deputies spoke into his radio that they were “escorting . . . [Wood] to the front gate.”

While walking toward the front gate, Mr. Wood made the following statements to all or some of the deputies.  All of these statements were recorded on the deputies’ body worn cameras:

“Look at these thugs with badges behind me. How many is there?”

“Fucking thugs with guns that don’t uphold the United States Constitution. Fuck all you. You dirty rat bastards.”

“And you, you’re a fucking thief, I’ve heard about you.”

The deputies insisted on the front gate, and one deputy told Mr. Wood that they were “not going to walk all the way to the back gate.” Mr. Wood replied, “Then that’s your fucking fat-ass problems, motherfucker, I’m leaving.” Mr. Wood turned and walked toward the back gate, with Blair and all six deputies following.

Mr. Blair and Mr. Wood walked in front of the deputies, continuing to argue. Although difficult to discern from the audio, Mr. Wood asked Mr. Blair, “Have you ever fucking served this country?,” to which Mr. Blair replied, “Yes, asshole.” [Though the court did not take judicial notice of Mr. Blair’s adjective it may be an objectively reasonable description.] Mr. Wood retorted, “Bullshit. In what? The Air Force? Fucking flyboy.” Mr. Wood then turned around and said to Dep. Troutman, “Look at this bullshit. You’re one big man ain’t you, motherfucker. You got eight pussies with badges behind you.” Mr. Blair commented, “You got a lot of mouth.” Mr. Wood replied that Dep. Troutman “wants to fucking batter [him],” and Mr. Wood planned to press charges. Mr. Blair turned to Dep. Troutman and said, “I’m your witness. That’s bullshit.” Mr. Wood continued to insist that Dep. Troutman had “touched [him]” and asked whether they knew “what the legal definition of battery is.” Mr. Blair repeated, “You got a lot of mouth, boy.” Mr. Wood retorted, shouting “Do you know what the legal definition of battery is, motherfucker? Then try to find out.”.

At that point, the deputies arrested Wood for disorderly conduct. On the way to the jail, a deputy said to Mr. Wood, “How’s that work? You got a shirt that said, ‘f the police,’ but you want us to uphold the Constitution?” He was charged with disorderly conduct, Ohio Rev. Code Ann. § 2917.11(A)(2), and obstructing official business, § 2921.31. The prosecutor later dismissed both charges, apparently because the “State [was] unable to locate necessary lay witnesses to [the] incident in time for trial” to show that Mr. Wood’s “words and conduct amounted to ‘fighting words’” under the First Amendment.

This is a link to the article, includes some of the body worn camera of the interaction and arrest of Mr. Wood:

Mr. Wood filed this 42 U.S.C. §1983 action against all six deputies involved in his arrest (Deputies Eubanks, Shaw, Troutman, Yates, Johnson, and Steiger), alleging numerous constitutional violations. The defendants moved for summary judgment, and the magistrate judge recommended granting the motion as to all but two of Mr. Wood’s claims—unlawful arrest and First Amendment retaliation. Wood v. Eubanks, R. & R., No. 3:18-CV-168, 2020 WL 635652, at 16 (S.D. Ohio Feb. 11, 2020). The district court disagreed in part, concluding that the deputies were protected by qualified immunity on the false arrest claim and that there was insufficient evidence of retaliation, so the court granted summary judgment to the defendants on all claims. Wood v. Eubanks, 459 F. Supp. 3d 965, 980 (S.D. Ohio 2020).

The case was returned to the District Court for further proceedings.

This case was issued by the Sixth Circuit Appellate Court which is binding in Kentucky, Michigan, Ohio and Tennessee.

Information for this article was obtained from Wood v. Eubanks, 20 – 3599, Mr. Wood’s civil complaint and the attached news article.

Does your agency train on the First Amendment and Disorderly Conduct?