Can Quentin be Successfully Prosecuted for Obstructing Official Business for Running from the Police?

The testimony and accompanying video confirmed that Mr. Woodson engaged in an affirmative or overt act that impeded Officer Palmer and Officer Wiesman from completing their official duties.

In the early morning hours of Monday October 11, 2021, officers were dispatched to 3500 Hoover Avenue in Dayton on a report of a male and a female fighting. When they arrived, they met the purported victim, S.P., who had obvious injuries to her face. Trial testimony indicated that both eyes were swollen, there was bruising under her right eye, a laceration was observed above her right eyebrow, and her lips were swollen and bloody. Officers asked where the suspect was, and S.P. pointed to the nearby barber shop and said, “over there.”.  The location was Rock’s Barber Shop located at 3500 Hoover Avenue, Dayton, Ohio. 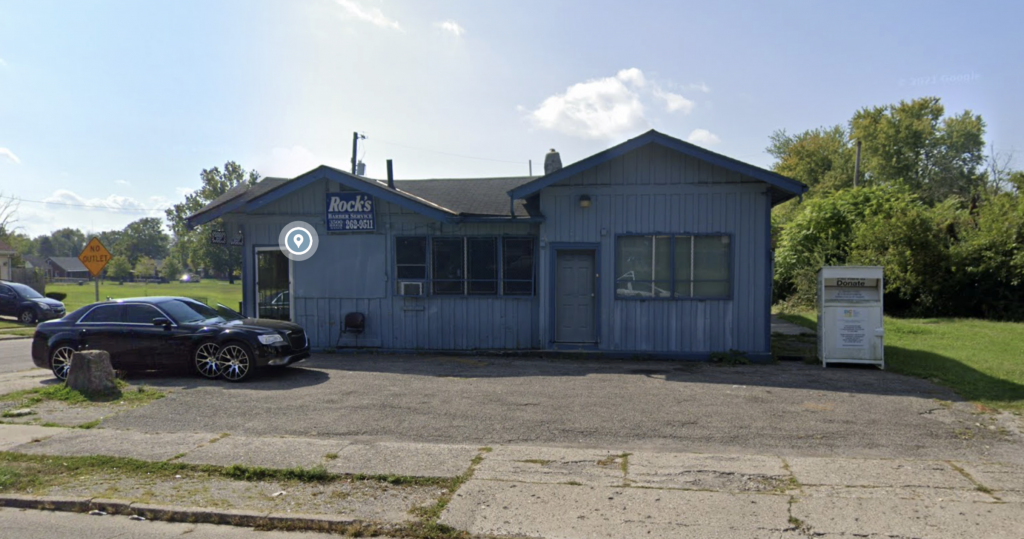 Rock’s Barber Shop located at 3500 Hoover Avenue, Dayton, Ohio.  This was the location that the officers observed Mr. Woodson when he fled on foot and had to be tasered to be captured.

The officers went to the indicated area and immediately encountered a male, later identified as Mr. Quentin Woodson. One of the officers called out for Mr. Woodson and made eye contact with him, and then Mr. Woodson took off running. Officers chased Mr. Woodson eastbound across Pearlie Avenue, around the backside of a house, and then north across Hoover Avenue. The chase ended when officers were able to get close enough to deploy a Taser. Mr. Woodson was taken into custody and then to the hospital.

Once Mr. Woodson was in custody, officers spoke with S.P., who was “very emotional, very distraught … She still had tears in her eyes, and she still was veryshaken up.”  She revealed that Mr. Woodson had caused the injuries to her face.

Mr. Woodson was charged by criminal complaint with two counts of domestic violence and one count each of assault, menacing, aggravated menacing, and obstructing official business. The case progressed to a bench trial on December 13, 2021. At that proceeding, the court heard testimony from Officer Austin Palmer and Officer Joshua Wiesman, and considered body camera video, photographs of S.P.’s injuries, and the 911 call. The victim, S.P., could not be located and did not testify. Mr. Woodson testified on his own behalf.

At the conclusion of the State’s case-in-chief, the court dismissed the domestic violence and menacing charges, but at the trial’s end, it found Mr. Woodson guilty of assault and obstructing official business.

On January 25, 2022, the court sentenced him. For assault, the court imposed 180 days in jail, with 100 days suspended and jailtime credit for four days; as to the remaining 76 days, Mr. Woodson was ordered to serve 30 days in jail and 46 days on electronic home monitoring. For obstructing official business, the court imposed 90 days, with 86 days suspended and four days of jailtime credit. In addition, Mr. Woodson was placed on probation for one year.

Mr. Woodson appeals and raises a single assignment of error.

O.R.C. §2903.13(A) states that “no person shall knowingly cause or attempt to cause physical harm to another.” Instead of challenging one of the elements of assault, Mr. Woodson argues identity; i.e., that because S.P. did not testify – and therefore did not identify him as the perpetrator – the evidence presented at trial was insufficient to garner a guilty verdict. We disagree; while it is true that S.P. did not testify at trial and therefore could not personally identify Mr. Woodson, there was ample evidence presented that proved identity. This legal element was strongly supported by body camera evidence.

Officer Palmer testified that when he and Officer Wiesman arrived on scene, they met with a very emotional and injured S.P., who, when asked where the suspect was, directed the officers to Mr. Woodson’s location. Then, after Mr. Woodson was taken into custody following a foot-chase, Officer Palmer interviewed S.P., who explained that Mr. Woodson “open-hand slap[ped]” her three to four times and then beat her with a metal chair. In fact, the body-camera footage from the officer documents a long conversation with S.P. in which she repeatedly identified Mr. Woodson as the suspect and described what he did to her. Even without the body-camera footage, the officers’ descriptions of what S.P. told them (which was admitted by the trial court via the “excited utterance” exception to the hearsay rule) would have been sufficient to prove identity.

Mr. Woodson, while denying injuring S.P., admitted that they had been in an argument that night and that when she fled the house, he pursued her, “cussing her and cursing her.” He also admitted that he dragged her out of the street. When describing their altercation in the street, he testified: One time, she was holding my ankles and I’m dragging her out [of] the street, trying to get her out [of] the street and she [was] just gripping. I did. I smacked her hand like, “Get off of me.”.

Finally, when confronted by officers about beating up a woman, Officer Wiesman testified that Mr. Woodson retorted, “So what? I’ll assault a man too.”.  The Second District Appellate Court would later provide context to “So what?”.

Based on the evidence presented at trial, the State proved every element of assault – including identity – beyond a reasonable doubt. The guilty verdict was not against the manifest weight of the evidence, and it was supported by sufficient evidence.

Mr. Woodson further challenges his obstructing official business conviction, arguing that the State did not prove he “knew that the police officers approaching him were actually police” and that there was “nothing to show that the officers identified themselves as police or that they told him to stop running away from them.”

To violate the statute, a defendant must engage in an affirmative or overt act that impedes a public official in the performance of his or her duties. State v. Prestel, 2005-Ohio-5236.

It is well-established that fleeing from law enforcement is an indication of obstruction. See State v. Drane, 2021-Ohio-730 (fleeing from an officer who is lawfully attempting to detain a suspect is an affirmative act that hinders the officer’s performance of official duties).

State v. Lohaus, 2003-Ohio-777, (“[Defendant’s] actions in fleeing across several lawns after being told to stop – and in forcing the investigating officer to physically restrain him – fell squarely within [O.R.C. §2921.31’s] proscriptions.”)

State v. Kates, 2006-Ohio-6779, (“[D]efendant’s act in failing to heed Officer Phillips’s orders to stop was an affirmative act that hindered or impeded Officer Phillips in the performance of his official duties in investigating the accident and was sufficient to support the trial court’s judgment of conviction for obstructing official business.”).

Here, the officers drove their marked Dayton Police Department cruiser to Mr. Woodson’s location, and Officer Wiesman (who was dressed in his uniform) yelled out for him. Both officers told the court that Mr. Woodson turned around, looked at them, and then fled on foot. Officer Parker recounted that he repeatedly told Mr. Woodson to stop, or he would be tased, but to no avail. It was not until Officer Palmer deployed his taser, bringing Mr. Woodson to the ground, that the pursuit ended. The body-camera video played at trial reinforced the officers’ testimony.

The testimony and accompanying video confirmed that Mr. Woodson engaged in an affirmative or overt act that impeded Officer Palmer and Officer Wiesman from completing their official duties. Nevertheless, Mr. Woodson argues now (and testified similarly at trial) that he was unaware the people chasing him were police officers, that the officers did not identify themselves, and that they did not order him to stop. This argument was rejected by the trial court, which evidently believed the officers’ testimony that they were in a marked police vehicle, were wearing uniforms, and were only 50-60 feet away when the encounter began. Further, both officers testified that they made eye contact with Mr. Woodson. Officer Wiesman stated: “I observed Mr. Woodson look at us and just … immediately took off.” He further stated that he saw Mr. Woodson because the area was well lit. Officer Palmer told the court that Mr. Woodson “looked at us, and then fled. He ran.” Both officers testified that they made several commands for Mr. Woodson to stop and get on the ground.

Mr. Woodson’s convictions for assault and obstructing official business did not create such a manifest miscarriage of justice that the conviction must be overturned, and this is not the exceptional case in which the evidence weighs heavily against the convictions. The assignment of error is overruled.

This case was issued by the Second District Appellate Court and is only binding in the following Ohio Counties: Champaign, Clark, Darke, Greene, Miami and Montgomery.

Does your agency train on the Obstructing Official Business?