If a Traffic Violator Fails to Stop for Twenty Seconds, Three hundred Feet and Three Turns – Is that Enough to Sustain a Charge of Failure to Comply?

Given the facts of this case, we find that Mr. Nowak’s act of continuing to drive, despite flashing lights and sirens, established that Mr. Nowak acted willfully.

On Friday April 16, 2021 Toledo Officer Gavin Paszczykowski and his partner were working the midnight shift on April 16, 2021 in South Toledo, near the intersection of Broadway and Maumee Streets. Around midnight, Officer Paszczykowski noticed a gold Buick Century “make a couple turns without using a turn signal.” The officer “inten[ded]” to stop the vehicle, but the driver pulled into a driveway and exited the vehicle. Officer Paszczykowski drove away from the area.

But, “a few minutes later,” Officer Paszczykowski saw the Buick again and observed it make another “turn signal infraction” when it turned from Maumee into a parking lot that emptied into an alley. It is undisputed that Mr. James Nowak was the driver of the Buick.

Officer Paszczykowski made a “sharp right-hand turn on to Maumee” and “went into the same alleyway and activated [the patrol car’s] overhead lights to stop the vehicle.” Mr. Nowak did not pull over or stop. Instead, Mr. Nowak turned right from the alley onto Eastern Street. Officer Paszczykowski followed and also activated his sirens. Mr. Nowak continued driving, and “[f]rom Eastern, [he] made another right hand turn into an uphill driveway … After turning into the driveway, [which] went uphill a ways, … [Mr. Nowak] turned left [into a parking place] facing … his apartment building.” 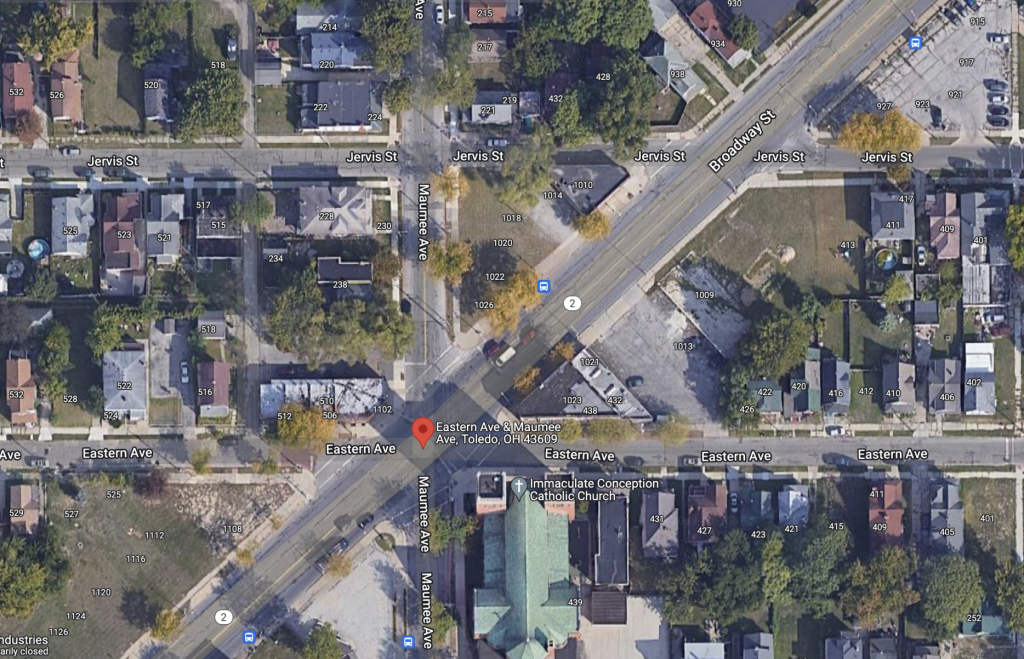 Mr. Nowak failed to stop for three turns and one of the turns occurred here at Maumee Avenue and Eastern Avenue in Toledo, Ohio.  Toledo Officer Gavin Paszczykowski charged Mr. Nowak for Failure to Comply.

Mr. Nowak exited the car “in a very, very aggressive manner.” Officer Paszczykowski also exited his car, with his gun drawn. Mr. Nowak was charged with failing to comply with an order or signal of police officer, in violation of O.R.C. § 2921.331 (B), a misdemeanor of the first degree, and also for failing to use a turn signal. Mr. Nowak was taken into custody and later released on his own recognizance.

After the state presented its case, Mr. Nowak moved for an acquittal, arguing that the state failed to present legally sufficient evidence as to each element of the offense. The trial court denied the motion. At the conclusion of the trial, the trial court found Mr. Nowak guilty and convicted him of both offenses. The court imposed a mandatory six month driver’s license suspension and further ordered Mr. Nowak to pay court costs. At Mr. Nowak’s request, the court stayed the driver’s license suspension, pending appeal.

Mr. Nowak appealed and raises two assignments of error for our review: I. The trial court erred in denying Defendant-Appellant’s motion for acquittal as to the charge of violating O.R.C. § 2921.331 (B)  because the state failed to present sufficient evidence to sustain a conviction by a trial court. II. In the alternative, the conviction is not supported by the manifest weight of the evidence.

Mr. Nowak was convicted of violating O.R.C. § 2921.331 (B), which provides that, “[n]o person shall operate a motor vehicle so as willfully to elude or flee a police officer after receiving a visible or audible signal from a police officer to bring the person’s motor vehicle to a stop.” The term “willfully” means that the person purposely sought to elude or flee a police officer after being ordered to stop. State v. Garrard, 2007 – Ohio – 1244. To “elude” means “to avoid adroitly or to evade,” and “flee” means to “escape from danger, pursuit, or unpleasantness; to ty to evade a problem.” Merriam-Webster.com/Dictionary/elude and Black Law Dictionary, (11th Ed.2019), respectively.

In this case, the parties agree that, after the police activated the patrol car lights, Mr. Nowak continued to drive, making three turns, in short succession, over the course of twenty seconds. During those twenty seconds, Mr. Nowak traveled less than three hundred feet before stopping in his own driveway. The parties also agree that Mr. Nowak could have stopped when the initial overhead lights came on because there was no traffic that night or any road hazards that would have prevented him from stopping immediately when signaled to do so.

Besides, the gist of Mr. Nowak’s argument on appeal is not that he was unaware of the police order to stop. Instead, Mr. Nowak suggests that because he “knew he was extremely close to his own driveway,” it was reasonable to delay stopping until he reached that “safe place.” We strongly disagree.

When the officers attempted to pull Mr. Nowak over, they were in a parking lot/alley that intersected with a busy, public street. According to Officer Paszczykowski, most drivers—when receiving a signal to stop—do so within “two to five seconds” and they “immediately pull over to the right.” Here, it took Mr. Nowak 20 seconds to comply. And, during that time, the officers were led further and further away from that public place, not knowing Mr. Nowak’s intentions or what awaited them when and if Mr. Nowak did stop. Indeed, based upon our review of the dashcam video, when the parties exited their vehicles they were soon joined by several others. One of the officers, with his gun drawn, can be seen saying something to the unidentified persons. Thus, while Mr. Nowak may have felt safer by postponing his interaction with police to a time and place of his choosing, we agree with the trial court that the very opposite was likely true for the police.

Given the facts of this case, we find that Mr. Nowak’s act of continuing to drive, despite flashing lights and sirens, established that Mr. Nowak acted willfully. In our view, the evidence presented by the state was sufficient to establish that Mr. Nowak operated a motor vehicle to willfully elude or flee a police officer after receiving a visible or audible signal from police to bring his vehicle to a stop.

For these reasons, we find that there was sufficient evidence to support Mr. Nowak’s failure to comply conviction under O.R.C. § 2921.331 (B).

The Sixth District Appellate Court issued this decision which is only binding in the following Ohio Counties: Erie, Fulton, Huron, Lucas, Ottawa, Sandusky, Williams and Wood.

Does your agency train on Traffic Stops?