Can a Suspect Dispel Probable Cause by Handing Marijuana Over to Police During a Traffic Stop – Thereby Preventing a Search of the Vehicle?

Ohio law does not support such an absurd result.

On Friday April 2, 2021, at 10:30 pm a Madeira Police Officer saw a vehicle traveling in the dark with no headlights or taillights on, so he got behind the vehicle and initiated a traffic stop. He noticed that as the vehicle was coming to a stop, the front-seat passenger appeared to be “reaching down towards the floorboard or underneath his seat where he was at.”. 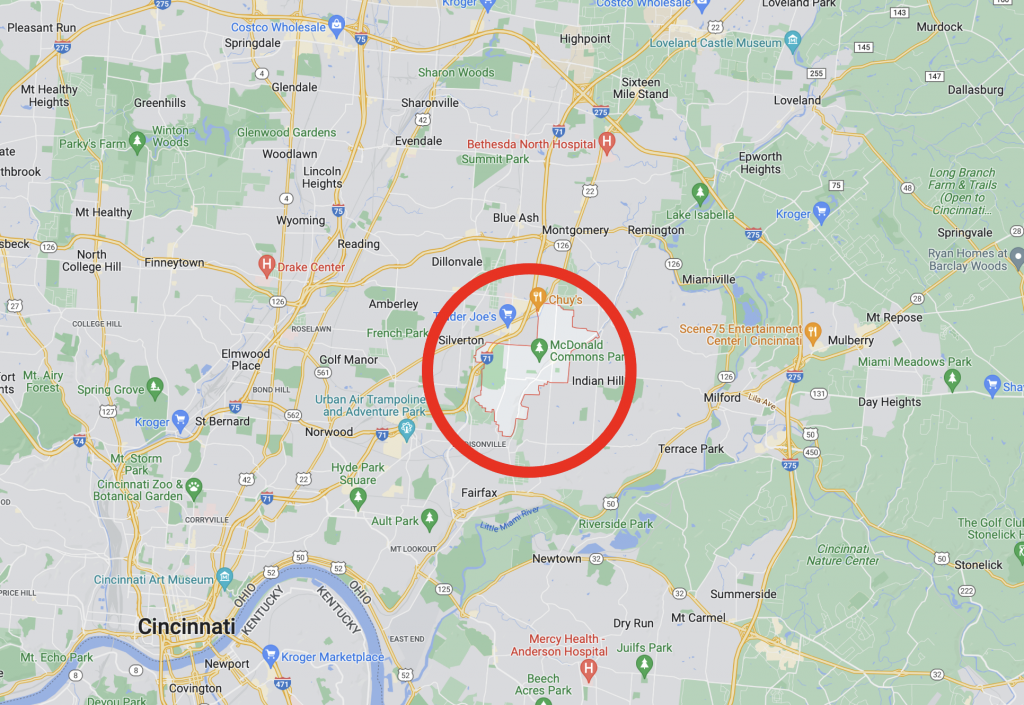 Maderia, Ohio is located north and east of Cincinnati, Ohio.  The events that occurred on Friday April 2, 2021 led to an arrest and an appeal.

The officer walked to the driver’s window and noted a very strong odor of marijuana coming from inside the vehicle. He asked for identification from the vehicle’s three occupants. Mr. Porter Mitchell was the front-seat passenger.

After the occupants were secured in the rear of the police cruiser, the officer began to search the stopped vehicle. He found a glass bong on the floorboard in front of the front passenger seat and a loaded handgun under the seat.

After the driver and back-seat passenger were removed from the police cruiser, the officer advised Mr. Mitchell of his Miranda rights, and Mr. Mitchell admitted that the handgun and the bong belonged to him. Mr. Mitchell said that he intended to smoke marijuana from the bong. He said that he had recently obtained the handgun because he had had two other firearms that were stolen from a family member’s house. Mr. Mitchell was arrested and charged with carrying a concealed weapon and with improper handling of a firearm in a motor vehicle.

Mr. Mitchell filed a Motion to Suppress prior to trial.  The focus of the motion was that the officer lacked probable cause to search the vehicle.

In its oral comments explaining its decision, the court acknowledged that “[I]f a police officer smells marijuana emanating from a car following a traffic stop, the officer may conduct both a warrantless search of the car and the occupants.” But the court found that because Mr. Mitchell “freely admitted” to the officer that he had drug paraphernalia, “search for it was unnecessary.” The [trial] court said, “At this point, no further reason existed to search Mr. Mr. Mitchell or the vehicle, and the officer needed probable cause or a reason that a crime was committed or would be committed and that probable cause must be established before the search takes place.” The court granted Mr. Mitchell’s motion to suppress.

The Supreme Court of Ohio has held that the smell of marijuana, alone, by a person qualified to recognize the odor, is sufficient to establish probable cause to search a vehicle, pursuant to the automobile exception to the warrant requirement.  State v. Moore, 90 Ohio St.3d 47,48 (2000). “There need be no other tangible evidence to justify a warrantless search of a vehicle.”.

Here, the trial court concluded that probable cause to search the vehicle based upon the odor of marijuana ceased to exist after Mr. Mitchell “freely admitted … that he had drug paraphernalia.” On the contrary, however, Ohio courts have held that when a vehicle’s occupant hands over drugs or contraband to a police officer during a traffic stop, the occupant also hands the officer probable cause to believe that the vehicle contains contraband.

Under the rule of law advocated by Mr. Mitchell, a vehicle operator [or occupant] might avoid a search of the vehicle for illegal drugs during a lawful traffic stop by voluntarily surrendering a small amount of an illegal substance to law enforcement. Ohio law does not support such an absurd result.

The smell of marijuana emanating from the stopped vehicle, Mr. Mitchell’s admission that he possessed drug paraphernalia, and the back-seat passenger’s voluntary production of a small amount of marijuana provided the police with probable cause to search the vehicle under the automobile exception to the warrant requirement. Therefore, the trial court erred by granting Mr. Mitchell’s motion to suppress. We sustain the state’s assignment of error, reverse the judgment of the trial court, and remand this case for further proceedings.

This case was issued by the Twelfth District Appellate Court and is only binding in the following Ohio Counties: Brown, Butler, Clermont, Clinton, Fayette, Madison, Preble and Warren.