Is it Reasonable for an Officer to Stop a Vehicle for a Traffic Violation Witnessed by Another Officer?

[A]lthough Tr. Dowler himself did not witness Mr. Hall commit any traffic violations, “police may initiate investigatory stops based on the observations of other officers or citizens.” citing Lyndhurst v. Brickel.

On Thursday May 14, 2020, Mr. Darvon Johnson and Mr. Markwan Hall landed at Cleveland Hopkins International Airport in Cleveland, Ohio. The two men retrieved their checked baggage, got in their vehicle, and began to drive home to Pennsylvania. After leaving the airport, Ohio State Highway Patrol Trooper Darrell Dowler initiated a traffic stop of the vehicle. A subsequent search of the vehicle revealed what appeared to be marijuana and THC cartridges. Tr. Dowler authored an investigative report related to the stop, which began:

On May 14, 2020 I was contacted by a confidential source about possible criminal activity. On May 14, 2020 at approximately 20:23 hours, I was contacted over the radio by plain clothes officers advising me there was a black Jeep Compass northbound on IR 71 about mile post 240 in the city of Cleveland driving at a high rate of speed. The report goes on to state that the plain clothes officers followed the Jeep in their unmarked vehicles and observed the Jeep traveling 90 mph in a 60 mph zone. Tr. Dowler then responded to the area and observed the Jeep exit the highway onto West 150th Street. Tr. Dowler initiated a traffic stop as the vehicle pulled into a gas station.

Tr. Dowler’s report goes on to state that when he made contact with the driver — later identified as Mr. Hall — Tr. Dowler smelled a strong odor of raw marijuana and noticed that Mr. Hall was “overly nervous,” stating that his hands were shaking uncontrollably and he was breathing heavily. Tr. Dowler stated that the front seat passenger — later identified as Mr. Johnson — was also “overly nervous.” Tr. Dowler also reported that Mr. Johnson was wearing a white shirt that read “I love weed.”  This is what the court will title Circumstantial Evidence. 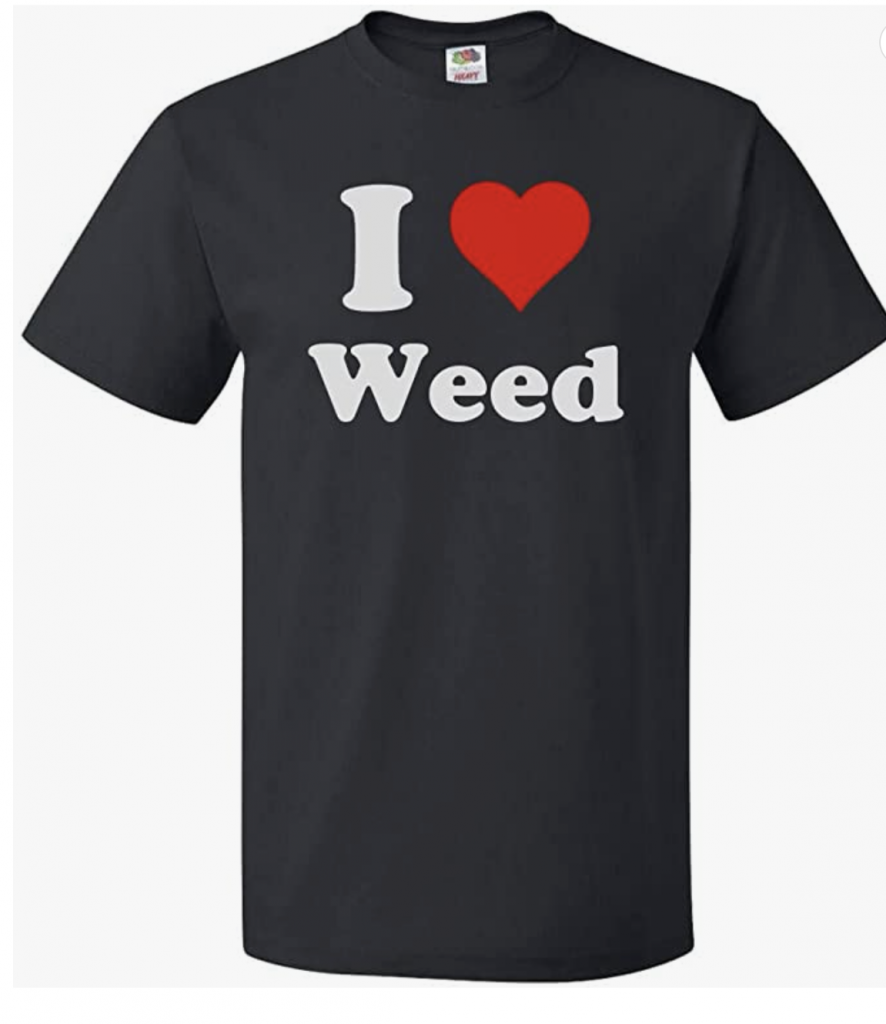 Mr. Darvon Johnson was wearing a similar T shirt, though it may not have been this exact style.  Tr. Dowler not only smelled package marijuana but Mr. Johnson represented his partiality for cannibas by displaying it on the front of his T shirt.

Mr. Hall could not find his driver’s license, at which point Tr. Dowler instructed him to exit the vehicle and come to his patrol car. Tr. Dowler patted Mr. Hall down for weapons and placed him in the right rear seat of his patrol car. At this point, two other troopers, Trooper Kelley and Trooper Hershman, had arrived on the scene for assistance. Tr. Hershman patted down Mr. Johnson for weapons and secured him in the right rear seat of Tr. Hershman’s patrol car. When Mr. Hall and Mr. Johnson were both secured in patrol cars, the troopers conducted a probable cause search of the vehicle. During the search, they located a suitcase in the back seat with Mr. Johnson’s name on it. Upon opening the suitcase, the troopers found four vacuum sealed bags containing what the troopers believed to be marijuana, along with vape cartridges and marijuana edibles.

In the trunk, the troopers found a suitcase with Mr. Hall’s name on it. Upon opening Mr. Hall’s suitcase, they found four vacuum sealed bags containing what was believed to be marijuana, along with vape cartridges and marijuana edibles.

After finishing the search, Tr. Dowler secured the evidence and returned to his patrol car. Tr. Dowler advised Mr. Hall of his rights. Tr. Dowler asked Mr. Hall if the marijuana in his suitcase belonged to him, and he said yes. Tr. Hershman had a similar conversation with Mr. Johnson, during which Mr. Johnson stated that all the contraband found cost around $15,000 dollars.

Tr. Dowler advised Mr. Hall and Mr. Johnson that they would receive letters telling them where to appear, issued Mr. Hall a warning for speeding, and released both men. Tr. Dowler transported the evidence to the Brook Park Highway Patrol Post, where it was packaged and sent to the crime lab for analysis.

Mr. Hall and Mr. Johnson were subsequently indicted on the charges described above. Mr. Hall initially pleaded not guilty to these charges.

On September 8, 2021, the defendants filed a joint “motion to reveal information relayed to officers from confidential informant.”

At the conclusion of the September 20, 2021 hearing, the state stipulated that Detective Norman was the “confidential source” referred to in Tr. Dowler’s investigative report.

On September 27, 2021, the court held a hearing on the defendants’ joint motion to suppress. Tr. Dowler and Detective Norman testified, and the defense introduced Tr. Dowler’s dash-cam video. After hearing testimony from witnesses and arguments from the parties, the court denied the joint motion to suppress. Subsequently, both defendants entered no contest pleas to all three counts of the indictment.

On October 27, 2021, the court sentenced Mr. Hall to one year of community control on each count.

Here, Detective Norman testified that Mr. Hall was driving at least ten miles over the posted speed limit. Because Detective Norman was in an unmarked vehicle and not equipped to conduct a traffic stop himself, he relayed this information to Tr. Dowler. We reiterate that a traffic stop is constitutionally valid where police have observed the driver commit a traffic violation. Dayton v. Erickson, 76 Ohio St.3d 3, 11-12 (1996). Further, although Tr. Dowler himself did not witness Mr. Hall commit any traffic violations, “police may initiate investigatory stops based on the observations of other officers or citizens.” citing Lyndhurst v. Brickel, 8th Dist. Cuyahoga No. 72322, 1998 Ohio App. LEXIS 2334, 4 (May 28, 1998). Therefore, probable cause existed for Tr. Dowler to initiate the traffic stop.

With respect to the subsequent search of the vehicle, a warrantless search of a vehicle may be justified when an officer has probable cause to believe that the vehicle contains contraband based upon the well-established automobile exception to the warrant requirement. State v. Dickerson, 8th Dist. Cuyahoga 2010-Ohio-5787, citing State v. Moore, 90 Ohio St.3d 47, 52, (2000). Further, Ohio courts have reiterated that the smell of marijuana, alone, by a person qualified to recognize the odor, is sufficient to establish probable cause to search a motor vehicle, pursuant to the automobile exception to the warrant requirement. There need be no other tangible evidence to justify a warrantless search of a vehicle.

Mr. Hall also argues that because medical marijuana is legal in Ohio, the odor of raw marijuana was insufficient to establish probable cause for the search, and Tr. Dowler should have ascertained whether Mr. Hall was authorized to use medical marijuana before conducting the search. Mr. Hall cites no Ohio law in support of this assertion. Further, we note that a motion to suppress must “state with particularity the legal and factual issues to be resolved,” thus placing the state and the court “on notice of those issues to be heard and decided by the court and, by omission, those issues which are otherwise being waived.” Columbus v. Ridley, 2015-Ohio-4968.  Because Mr. Hall did not raise this argument in the joint motion to suppress, nor did his counsel make this argument orally at the suppression hearing, we decline to consider this argument.  The court excludes the fact that Mr. Johnson did not wear a T shirt that stated “I love Medical Marijuana”.

Therefore, the search of the vehicle did not violate the Fourth Amendment’s prohibition against unreasonable searches and seizures. Because neither the stop nor search was unconstitutional, Mr. Hall’s first assignment of error is overruled.

This case was issued by the Eighth District Appellate Court and is only binding in Cuyahoga County, Ohio.