Kandale Initially Complied when Stopped but Quickly Fled and Crashed – Were Either of His Detentions Reasonable?

Thus, the initial stop was nothing more than a temporary stop and that Mr. Harrison never fully submitted to the show of authority. As a result, he was not “seized” for the purposes of the Fourth Amendment.

On Tuesday November 3, 2020, Deputy Coleton Piatt of the Logan County Sheriff’s Office was watching traffic on US 68 from a parking lot. Dep. Piatt saw a car pass his car and aggressively brake for no observable reason. Dep. Piatt then pulled out and followed the car as it turned down Tanglewood Drive. The car quickly turned into a driveway and turned off its lights. A couple minutes later, the car turned back on its lights and resumed traveling on US 68. Dep. Piatt then initiated an investigatory stop near Tracemore Lane. The car was slow to stop, turned on its hazard lights, and continued slowly moving. As Dep. Piatt was pulling up behind the vehicle, he observed the driver making unnecessary movements such as bending down and reaching into the glove compartment. Dep. Piatt testified that he did not feel safe approaching the vehicle and requested the driver, later identified as Mr. Kandale Harrison, to exit the vehicle with his hands visible. Mr. Harrison asked Dep. Piatt what law he had violated, and Dep. Piatt informed him that no laws had been violated, but his behavior was suspicious. Despite numerous orders to step out of the vehicle, Mr. Harrison did not do so. Dep. Piatt then told him that if he did not get out of the car, he would release the canine. Mr. Harrison then told Dep. Piatt that he did not feel safe and left the traffic stop. Dep. Piatt then got back in his cruiser and followed the driver. Mr. Harrison was about to feel a whole lot less safe.

Mr. Harrison drove northbound at 55 – 60 mph with his hazard lights on. Mr. Harrison’s day was about to be less safe.  For thirty-nine minutes, Mr. Harrison continued to evade Dep. Piatt and officers from multiple other agencies. During the pursuit, Mr. Harrison ran multiple stop signs, exceeded the speed limit, attempted to pass a police cruiser in front of him by crossing a double yellow line, and narrowly missed hitting oncoming vehicles. At times, Mr. Harrison’s speed reached 90 mph on single lane roads, which is quite brave considering he believed he wasn’t safe sitting in a parked car.

When the driver reached US 68, he made another right turn to go north on that road. Dep. Piatt saw him toss a black object out of the window. The driver continued into the village of West Liberty. When the driver reached Sidney Road, he turned left. Dep. Piatt observed the driver throw something from the driver’s window which landed in a grassy area and he notified others to check that area. While going through West Liberty, the driver failed to stop at multiple stop signs. At one point, the driver bumped into a West Liberty patrol car. Dep. Piatt then saw the driver toss another bag at the base of an evergreen tree near an alley that he asked be checked by officers. Eventually Dep. Piatt began bumping the car he is following in an attempt to get him to stop. Champaign County Sheriff’s Office deployed stop sticks, which flattened the tires on the driver’s side of the Nissan. Mr. Harrison continued to try to elude them by driving on the rims. At the intersection of SR 296 and SR 814, Champaign County deputies joined the pursuit and attempted to box him in. The driver went around their patrol cars. The driver then turned north onto SR 814 and Dep. Piatt made contact with his vehicle a couple of times before the driver lost control and the chase ended. 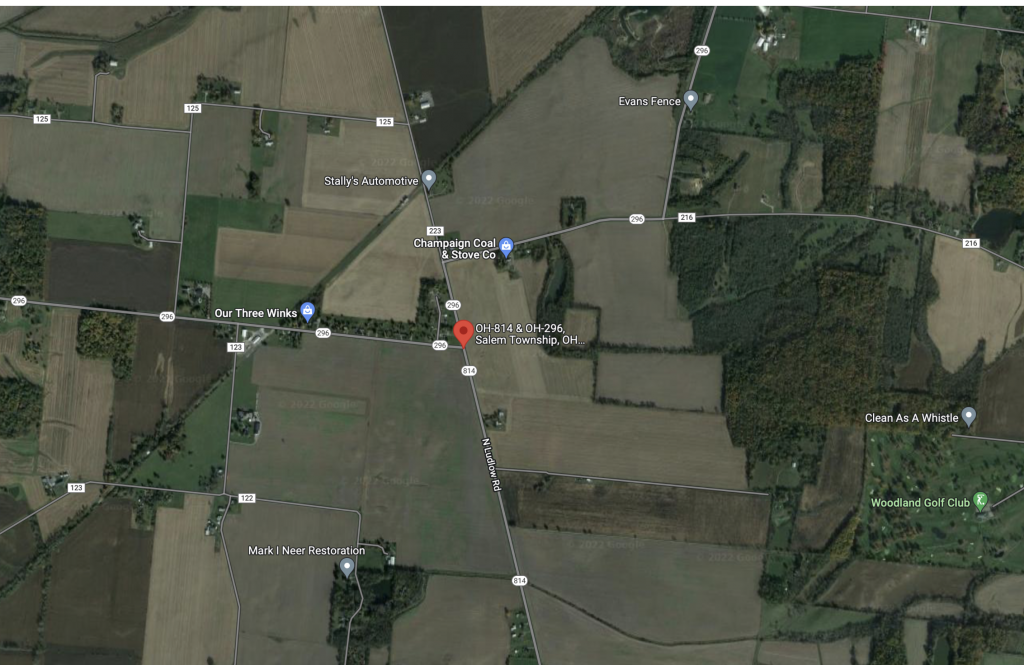 Following a pursuit, Mr. Kandale Harrison crashed near the intersection of SR 296 and SR 814, in Champaign County, Ohio.  Was Mr. Harrison seized at the initial stop or only once he crashed?

Officers recovered a Ruger P89 handgun from this location. Dep. Piatt also saw Mr. Harrison throw an object out of the window near the corner of US 68 and Sidney Street in West Liberty. Officers recovered a bag with a large amount of methamphetamine at that location. A third item was tossed from the window near an alley intersecting with Reynolds Street in West Liberty. Officers recovered a second bag with methamphetamines at that location. Dep. Piatt’s dash camera recorded all these objects being tossed from the car. After Mr. Harrison was arrested, the vehicle was towed to the Logan County Impound. A search warrant was obtained and more methamphetamines were found in the vehicle. If Mr. Harrison was truly concerned with safety he should not have traveled with a car load of felonies.

Mr. Harrison entered pleas of not guilty to all counts.

On April 7, 2021, Mr. Harrison filed a Motion to Suppress claiming the initial stop was not based upon a reasonable, articulable suspicion. On July 21, 2021, Mr. Harrison filed a motion to dismiss the firearm specification alleging that it violated his Second Amendment rights under the U.S. Constitution. A new motion to suppress was filed by Mr. Harrison’s new attorney on August 2, 2021 – he may not have felt safe with his first attorney. A hearing on all outstanding motions was held on August 25, 2021.

On December 13, 2021, a final pretrial was held. Doc. 157. Pursuant to a plea agreement, Mr. Harrison agreed to enter pleas of no contest Count 1- Aggravated Possession of Drugs along with the firearm specification and the major drug offender specification and Count 3-Failure to Comply. The State agreed in exchange to dismiss Counts 2, 4, and 5. After conducting a dialogue with Mr. Harrison, the trial court accepted the no contest plea and found Mr. Harrison guilty of Counts 1 and 3 along with the two specifications. The remaining counts were dismissed. A sentencing hearing was held on January 11, 2022. The trial court ordered a prison term of 11 to 16 1⁄2 years on Count 1, with one more year added for the firearm specification. The trial court ordered a prison term of three years for Count 3 and ordered that all terms be served consecutively for an aggregate sentence of 15 – 20 ½ years in prison. Mr. Harrison appealed from this judgment. On appeal Mr. Harrison raises the following assignments of error.

Mr. Harrison’s appealed that his initial seizure was unreasonable.  But was he actually seized because he fled shortly after contact with Dep. Piatt?

Mr. Harrison briefly complied with the officer’s show of authority by stopping the vehicle when he saw the lights and heard the siren. However, that was where his submission ended. When commanded to exit the vehicle, he refused. Then he drove off, allegedly to find a safer place to pull over. Mr. Harrison did not stop again for approximately forty minutes and only stopped then when he lost control of the vehicle. Thus, the initial stop was nothing more than a temporary stop and that Mr. Harrison never fully submitted to the show of authority. As a result, he was not “seized” for the purposes of the Fourth Amendment.

The trial court did not err in overruling Mr. Harrison’s motion to suppress. Thus, the first assignment of error is overruled.