Is it Objectively Reasonable to Shoot a Robber Armed with a Knife who is Holding it at his Side Thirty Feet Away?

Mr. Groom’s actions in the moments before the shooting did not justify lethal force.

Considerable misfortune occurred in Lawrenceburg, Tennessee, on Friday June 29, 2018. Randy Groom entered a Rite Aid pharmacy at 2101 North Locust Avenue to refill a prescription for a brand-name drug that treats opioid addiction. He carried a large knife in a sheath. At the outset, a technician informed Mr. Groom that he could not use a coupon with which he hoped to buy the drug. Undeterred, Mr. Groom paced the store for a few minutes while he waited for the prescription. When the pharmacist called Mr. Groom to the counter to check him out, Mr. Groom grabbed the prescription and left the store without paying. The pharmacist followed him out, offering to provide a lower-cost drug in an amount Mr. Groom could afford. Mr. Groom refused the offer and kept walking. 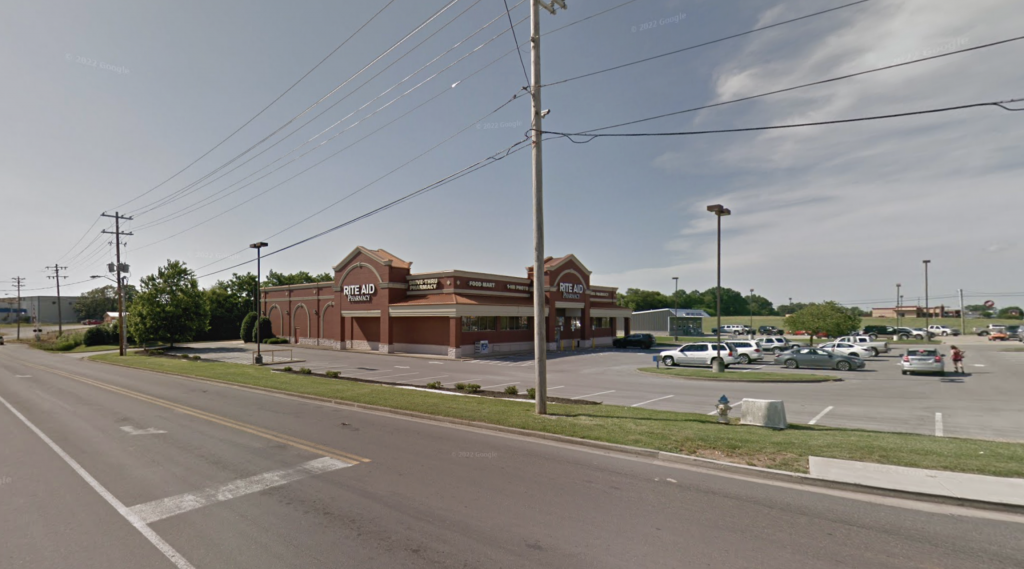 Mr. Randy Groom robbed the  Rite Aid pharmacy at 2101 North Locust Avenue in Lawrenceburg, Tennessee.  He would later be shot to death by responding officers.

Shortly after 5 p.m., the Lawrenceburg emergency dispatcher alerted Lawrenceburg Police Officers that a man carrying a large knife had robbed a local Rite Aid. The dispatcher added that the suspect, Mr. Randy Groom, left the pharmacy and ran toward a nearby Tractor Supply store. Captain David Russ and Officer Jason Lee responded to the area. Capt. Russ had some familiarity with Mr. Groom, a Lawrenceburg resident known for walking around the city because he did not own a car. Capt. Russ also had heard that Mr. Groom suffered from mental illness and had attempted suicide before.

The officers spotted Mr. Groom as he walked along an access road in a shopping center parking lot. Capt. Russ parked his vehicle at the northern entrance to the road and got out of the car. Officer Lee pulled up at the road’s south end and exited his car at the same time. Capt. Russ announced himself and told Mr. Groom that they needed to talk. Mr. Groom reached for his waistband, lifted his shirt, and pulled a large knife out of a sheath in his shorts. “Not today David,” he said. Both officers drew their firearms.

Mr. Groom ignored several commands from the officers to drop the knife and started walking toward Capt. Russ, who stood next to his vehicle. Officer Lee approached Mr. Groom from behind.  Mr. Groom waved his knife around as he walked. He came to a stop thirty feet from Capt. Russ. He told Capt. Russ to shoot him, repeating himself at least five times. Officer Lee testified that, although Mr. Groom at first was “being very belligerent” and “yelling,” he appeared to deescalate the situation because he stopped walking and eventually stopped waving the knife, instead holding it at waist height.

This status quo held for another twenty seconds. But it did not last. Holding the knife near his waist, Mr. Groom took another step. Capt. Russ claims that Mr. Groom stepped toward him. Mr. Groom’s estate claims that he stepped sideways. What no one disputes is that Capt. Russ, still standing near the rear of his vehicle, fired a shot at Mr. Groom. It struck Mr. Groom in the chest. He collapsed and died from the wound.

Dayna Lee, the mother of Mr. Groom’s minor daughter, filed this 42 U.S.C. § 1983 action against Capt. Russ, alleging that he used excessive force in violation of the Fourth and Fourteenth Amendments. Capt. Russ moved for summary judgment based on qualified immunity. The district court granted the motion.  Ms. Lee appealed and the Sixth Circuit Appellate Court overturned the district court’s determination that Capt. Russ was entitled to qualified immunity.

Qualified Immunity was established by the U.S. Supreme Court in Harlow v. Fitzgerald, 457 U.S. 800, 819 (1982) which held a defendant is entitled to Qualified Immunity unless both aforementioned : 1) There was a constitutional violation, and; 2) The right at issue was clearly established when the event occurred.

Construing the record evidence in the estate’s favor as we must at this stage, a reasonable jury could find that Capt. Russ violated Groom’s constitutional rights. Mr. Groom did not pose an imminent and serious risk when Capt. Russ fired his weapon. Capt. Russ, the closest individual, stood near the back of his vehicle thirty feet away. Officer Lee provided cover with his firearm from behind Capt. Groom. Aside from telling Capt. Russ “[n]ot today” when Capt. Russ said they needed to talk, Mr. Groom did not make any verbal threats. He stood still for roughly twenty seconds, lowered his knife to waist height, then made one step sideways to Capt. Russ. This was not a threatening advance or at least that is what a jury could find on this record. Even so, Capt. Russ fired the shot as soon as Mr. Groom “began to move.” Granted, Capt. Russ knew that Mr. Groom had robbed a pharmacy. He knew that Mr. Groom had unsheathed a knife when the officers confronted him and disregarded commands to drop it. And he knew that Mr. Groom had walked to a position thirty feet away and that Mr. Groom told Capt. Russ to shoot him. But all record facts considered, Mr. Groom’s actions in the moments before the shooting did not justify lethal force. Even Officer Lee thought that Mr. Groom had calmed down and “didn’t see any reason for a shot to be fired from where” he stood behind Mr. Groom. On this record, a reasonable jury could find that Capt. Russ used excessive force.

This decision was issued by the Sixth Circuit Appellate Court and is binding in Kentucky, Michigan, Ohio and Tennessee.