Mike, a Convicted Felon, Hid His Firearm from Responding Officers While an Off-Duty Officer Watched

Was the Methamphetamine Discovered in Michael Keister’s keister Admissible?

The State’s evidence established that Keister hid a baggie containing methamphetamine in his buttocks, brought it into the Montgomery County Jail, and lied to a corrections officer when asked what it was. That evidence was sufficient to prove that Keister violated R.C. 2921.36(A)(2).

On  June 15, 2019 at approximately 9:00 p.m., Officer Jack Miniard was traveling eastbound on U.S. 35, approaching the Steve Whalen Boulevard exit, when he observed a 1980s white Oldsmobile “veer off the roadway to make the exit,” lose control, spin around, hit a light/utility pole, and come to rest in a ditch on the right side of the roadway near the fence line of Boltin Street. Officer Miniard saw the driver, later identified as Mr. Michael Keister put the car in reverse, but the tires spun and the vehicle was unable to back up.

When the crash occurred, Officer Miniard, an officer with more than twenty years of experience with the Dayton Police, was off-duty and traveling in his personal vehicle with his family. Officer Miniard pulled over to the side of the road and called 911. Upon learning that crews from the East Division were “tied up” and responding officers were coming from a distance away, Officer Miniard called Officer David Denlinger, his former partner, and asked if he was available. Officer Denlinger responded that he was nearby in the Oregon District and was able to respond.

Officer Miniard stopped to see if Mr. Keister needed assistance. While there, the officer observed Mr. Keister place items, including what appeared to be a firearm wrapped in a sweatshirt, in an Amazon box and then take the box toward a fence line near the highway. While still seated in his own vehicle, Officer Miniard saw a passenger exit the Oldsmobile and put his backpack in the vehicle’s trunk. Officer Miniard then observed Mr. Keister, go to the rear of the car and move items around. Officer Miniard got out of his vehicle, approached Keister without identifying himself, and asked if Mr. Keister needed assistance from the police, a medic, or a tow truck. Keister responded that he was fine and had called AAA, which would be there in approximately 45 minutes.

Officer Miniard noticed that Mr. Keister was putting multiple items in a large brown Amazon box, including the passenger’s backpack, a Folgers container, and a dark blue sweatshirt that appeared to have an item hidden in it.  Based on the way Mr. Keister grabbed the sweatshirt and the shape of it, Officer Miniard surmised the hidden object was a gun.  As Officer Miniard walked back to his car, he saw Mr. Keister take the Amazon box to the fence line in the area of Boltin Street and Hulbert Streets, about twenty-five yards away, and then return to the car. 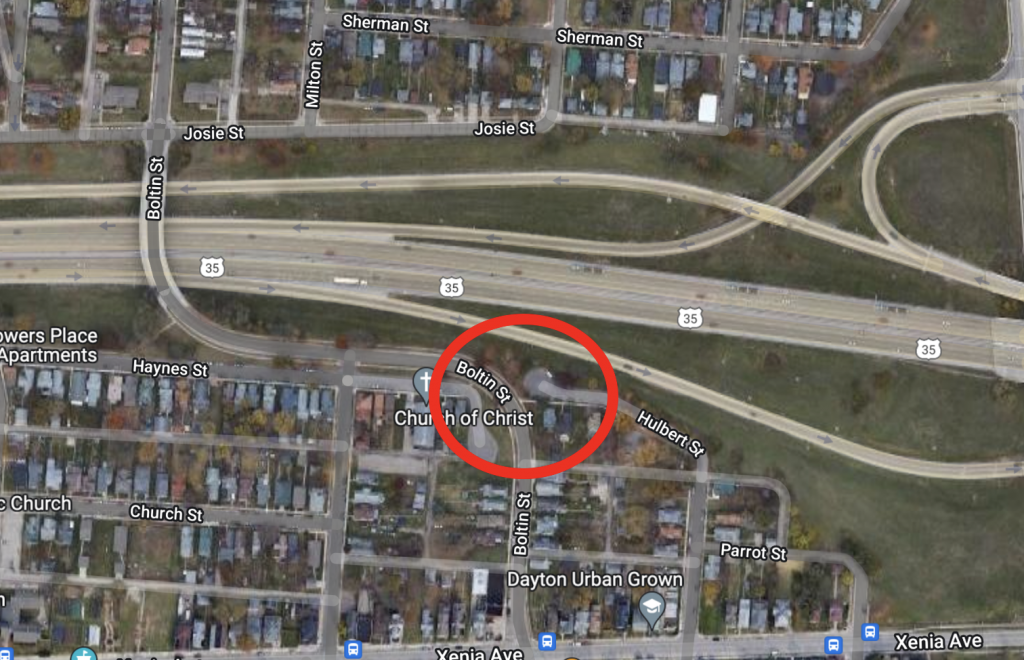 Mr. Keister made a feeble attempt to hide an Amazon box that contained a needle, firearm and his state identification card along a fence line near Boltin Street and Hulbert Street.  This location is adjacent to S.R. 35 in Dayton, Ohio.

Mr. Keister again was walking away from the car as uniformed officers, Officers Gotlieb and Hudson, arrived. Officer Miniard informed the officers where Keister was headed and indicated that he would return to the scene after taking his family home. At that point, Officer Miniard had been at the scene for 10 to 15 minutes.

As Officer Miniard was leaving the scene, he saw the uniformed officers talking with the passenger, Mr. Jesse Ladd, who had remained by the Oldsmobile the entire time. He also observed Mr. Keister walking back toward his vehicle. Officer Miniard noticed that Mr. Keister’s clothing had changed: he no longer was wearing a black do-rag or a red jersey with the number 3 on it and, instead, he was wearing an off-white tank top. Officer Miniard also talked with Officer Denlinger and gave him the location of where he had seen Mr. Keister place the Amazon box.

While Officer Gotlieb was speaking with Mr. Ladd, Mr. Keister approached them from the other side of the fence, asked if everything was okay, and indicated that he knew Mr. Ladd. Mr. Keister did not immediately identify himself or indicate that he had been involved in the crash. Mr. Ladd whispered to the officers that the man was the driver of the vehicle.

Upon his arrival, Officer Denlinger checked on the status of the uniformed officers and then drove into the neighborhood where Officer Miniard had indicated that Mr. Keister had taken the box. Denlinger located the box and took it to his cruiser. Inside the box he found a handgun wrapped in a hoodie or towel and a blue backpack. The backpack contained a notebook/ledger, a needle, methamphetamine, and Mr. Keister’s wallet with his state identification card. Officer Denlinger notified the other officers of what he had found and asked them to detain the two occupants of the vehicle.

Approximately thirteen minutes after Mr. Keister was placed in the cruiser, Officer Gotlieb placed him under arrest. A few minutes later, the officer notified Mr. Keister of his Miranda rights. Officer Gotlieb testified that Mr. Keister appeared to be somewhat intoxicated, but not to the point where he could not understand his rights. Keister agreed to speak with Officer Gotlieb and made statements denying knowledge of the Amazon box, where the gun came from, who the driver was, and why his wallet with his identification was in the box.

After being on-scene for roughly one hour, Officer Gotlieb transported Mr. Keister to the Montgomery County Jail. While Mr. Keister was in the prisoner intake room, a corrections officer found a bag of methamphetamine in Mr. Keister’s buttocks.

The officer relayed his observations to uniformed officers who responded to the crash. While Mr. Keister was being detained by uniformed officers for purposes of the crash investigation, Officer Denlinger located the box, which contained a firearm and Keister’s state identification card, among other things. At Officer Denlinger’s instruction, Mr. Keister was arrested.

Mr. Keister filed a Motion to Suppress.  The motion was based on his belief he was unreasonably detained in the police cruiser, a violation of his Fifth Amendment Rights against self-incrimination; he did not tamper with evidence; he was not guilty of Having a Weapon Under Disability and the admission of the methamphetamine in his buttocks were all unlawful.  The last motion was based on the officer’s lack of a verbal warning that Mr. Keister was not permitted to transport methamphetamine in the jail even though there are multiple signs that he passed with the meth in his keister.

The trial court overruled all of Mr. Keister’s Motions to Suppress and a jury found him guilty of Aggravated Possession of Drugs – equal to or greater the bulk amount, but less than 50 times the bulk amount, Tampering with Evidence, Having Weapons Under Disability and Illegal Conveyance of Drugs of Abuse onto the grounds of a Detention Facility.  The trial court sentenced him to eight to twelve years of incarceration.  He filed an Appeal to the Second District Appellate Court and that court overruled each of the appeals and upheld his convictions and sentence.

Does your agency train on Tampering with Evidence?