Did Antonio’s Reckless Driving Create an Imminent Risk of Harm to the Surrounding Public in the White Castle Lot to Justify Deadly Force?

We must never allow the theoretical, sanitized world of our imagination to replace the dangerous and complex world that policemen face every day.  What constitutes reasonable action may seem quite different to someone facing a possible assailant than to someone analyzing the question at leisure.

On Tuesday April 10, 2018, at 6:10 p.m. on West 13 Mile Road at Benjamin Avenue, Royal Oak’s, Michigan Police Officer Keith Bierenga observed a BMW merge quickly from the center turn lane into a westbound lane, forcing an oncoming car in this lane to quickly slow to avoid a collision.  Officer Bierenga attempted to initiate a traffic stop. The driver of the BMW later identified as Mr. Antonio Gordon failed to stop and drove by houses and apartment buildings on either side of the road. After failing to pull over for several blocks, Mr. Gordon came upon a red light at a busy intersection surrounded by businesses and restaurants. He stopped his car behind several cars waiting at the light, with Officer Bierenga directly behind him. Officer Bierenga exited his cruiser, approached Mr. Gordon’s BMW, and began speaking to him through the driver’s window. Officer Bierenga testified that, through Mr. Gordon’s partially open window, he perceived that Mr. Gordon’s skin was pale, his eyes were glassy, and that he was exhibiting signs of being under the influence of something.  Officer Bierenga was correct because it would later be learned that Mr. Gordon was operating his BMW with a .27 BAC.

Officer Bierenga spoke to Mr. Gordon for approximately ten seconds at the driver’s side of Mr. Gordon’s vehicle while the traffic light remained red. When the light turned green and the traffic ahead of him moved forward, Mr. Gordon accelerated away from Officer Bierenga. The officer ran back to his car and told dispatch that the driver fled. Dash cam video shows the significantly impaired Mr. Gordon turning from the westbound lane into the center turn lane and braking. From the turn lane, Mr. Gordon then made a sharp left turn in front of oncoming traffic into a White Castle parking lot, causing the oncoming vehicles to brake. 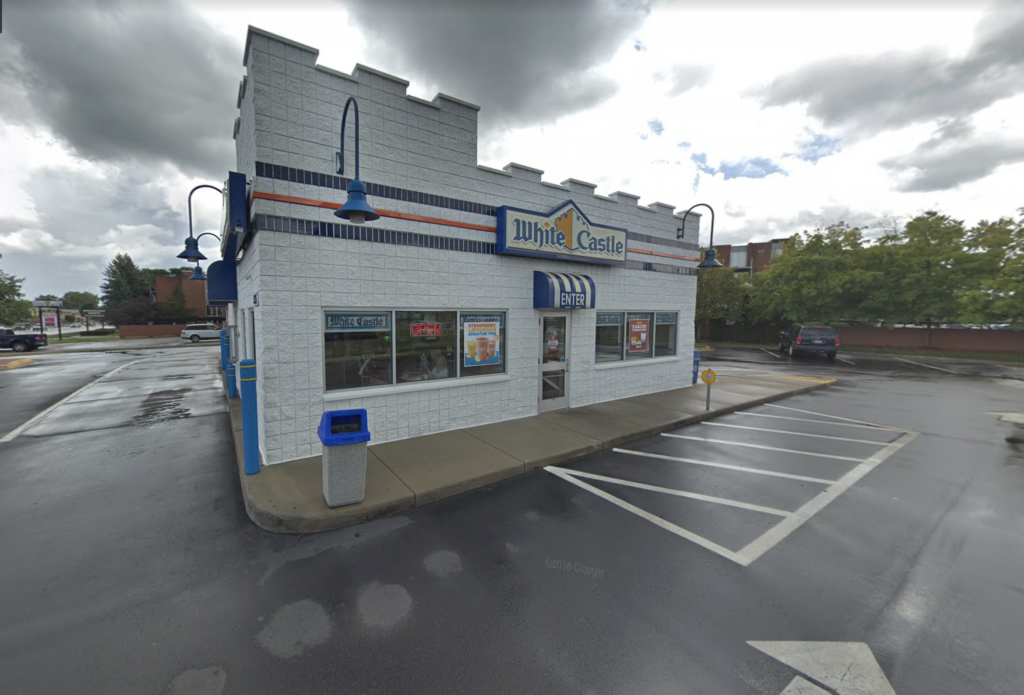 After losing track of Mr. Gordon, Officer Bierenga provided dispatch with a physical description of Mr. Gordon and a description of the make and color of Mr. Gordon’s car.  Approximately fifteen minutes later, Officer Bierenga spotted a BMW in line at the White Castle drive-thru that looked like Mr. Gordon’s. Mr. Gordon was at the drive-thru window paying for his order – evidently having a high BAC and craving White Castle sliders is akin to predictive policing without a computer-generated algorithm. Another car was parked in line about three feet behind Mr. Gordon.

The following events are visible on the White Castle drive-thru surveillance camera located inside the kitchen pointing toward the window. At approximately 6:24 p.m., Mr. Gordon can be seen pulling into the White Castle drive-thru window. During this time, Mr. Gordon engaged in a transaction with the cashier and appeared to be acting normally, as being stopped by law enforcement and consummating a financial transaction to get a sack full of sliders is distinguishable. The video is not clear enough to see whether Mr. Gordon is exhibiting signs of intoxication.

Officer Bierenga’s dash cam captured Mr. Gordon’s car driving around the White Castle and toward the street after he was shot. Once Mr. Gordon drove around Officer Bierenga’s car, Officer Bierenga got back in his vehicle and followed Mr. Gordon out of the White Castle and onto the street, headed back toward the direction of the original traffic stop. As Officer Bierenga followed, Mr. Gordon picked up speed and then began to slow down after a block. Mr. Gordon then presumably began to lose consciousness, drifted across the center lane, and crashed into a car travelling the opposite direction. Mr. Gordon was subsequently transported to the hospital, where he died. Mr. Gordon suffered two gunshot wounds, one to his left arm and chest and another to his right arm. Mr. Gordon’s toxicology report indicated that he had a blood alcohol content of .27 at the time of death. Officer Bierenga testified that he shot Mr. Gordon “to stop [him] from hitting and killing me or hurting me,” and that he believed he was “in direct line of harm at the time that [Bierenga] discharged [his] gun.”

A news story on the incident provides video.

A news story where the family opines the shooting was unjustified.  Not surprisingly the family did not opine on the repeated felonious behavior of Mr. Gordon.  News stories always omit the repeated lack of compliance by the suspect.  This story also includes the repeated citations and arrest that establish Mr. Gordon’s recidivism.

Plaintiff Nita Gordon, Personal Representative of the Estate of Antonino Gordon, brought a claim for excessive use of force against Bierenga under 42 U.S.C. § 1983. The estate also brought a claim of municipal liability against the City of Royal Oak, which the district court dismissed in May of 2019 based on Qualified Immunity. Ms. Gordon now appealed to the Sixth Circuit Appellate Court.

Ms. Gordon appealed the decision to grant Officer Bierenga and the City of Royal Oak Qualified Immunity based on whether Mr. Gordon’s vehicular flight placed the officer and members of the public in imminent danger that would or would not justify the use of deadly force.

To meet the threshold of Qualified Immunity the plaintiff must a two-part test:

Here the court held there was no clearly established right when Officer Beirenga shot and killed Mr. Gordon as he fled. The plaintiff relied on a case titled Latits v. Phillips, 878 F.3d 541 (6th Cir. 2017) which held that the officer’s shooting in that case was unconstitutional.

The following is a brief overview of Latits. An officer pulled over a driver after midnight for turning the wrong way onto a road. When the officer approached the car and asked the suspect for his license and registration, he saw the driver attempt to hide bags of suspected narcotics. After the officer asked the driver to step out of the car, the driver fled. He then led officers on a chase travelling at about 60 miles per hour on a ten-lane divided highway with no other vehicles around. Eventually, the defendant officer rammed the driver’s vehicle off the road and into the grass. When the driver’s car stopped in the grass, he began to drive slowly toward an opening between two officers’ cars and collided head on with another officer’s car at low speed. The driver then reversed away from the car past the defendant officer, who was now on foot. As the car passed, the officer shot the driver three times, killing him.

The court in Latits held “[T]he driver “did not present an imminent or ongoing danger and therefore that the shooting was not objectively reasonable.” Id. at 552. First, because the officer had fired at the driver’s car “after [the] car had passed the point where it could harm him,” so the officer “had time to realize he was no longer in immediate danger.” Id. at 548. And second, because permitting the driver “to continue to flee instead of shooting him would not have put the public in imminent danger either.” Id. at 550.”.

Based on the aforementioned overview of Latits the Sixth Circuit in this case opined “The circumstances of Gordon’s flight are different. Gordon fled from Bierenga during rush hour in the middle of a major road in a populated Detroit suburb, adjacent to residential neighborhoods and businesses. Bierenga observed Gordon make a reckless left turn in the face of oncoming traffic near a busy intersection to escape from Bierenga, causing oncoming cars to brake to avoid colliding with Gordon as he turned into the White Castle parking lot. Several cars were parked in the parking lot. Multiple patrons and employees were inside. What’s more, after Bierenga later blocked in Gordon at the drive-thru window, Gordon reversed into the occupied vehicle behind him before accelerating forward and hitting Bierenga’s police vehicle. Although Gordon’s contact with those vehicles occurred at a relatively low speed, his conduct showed a willingness to strike both police and civilian vehicles to effectuate his escape from police. Given the time and place at which it occurred, Gordon’s reckless driving posed a materially higher risk of harm to the surrounding public than the reckless driving in Latits.”.

Based on the aforementioned analysis the Sixth Circuit Appellate Court held “[T]he estate cannot point to a case that meets the requisite level of “specificity” to clearly establish that it was unlawful for Bierenga to shoot Gordon in this factual scenario. Thus, Bierenga is entitled to qualified immunity.”

Does your agency train on Use of Force and Qualified Immunity?