When Can Handcuffing be Considered Excessive Force? 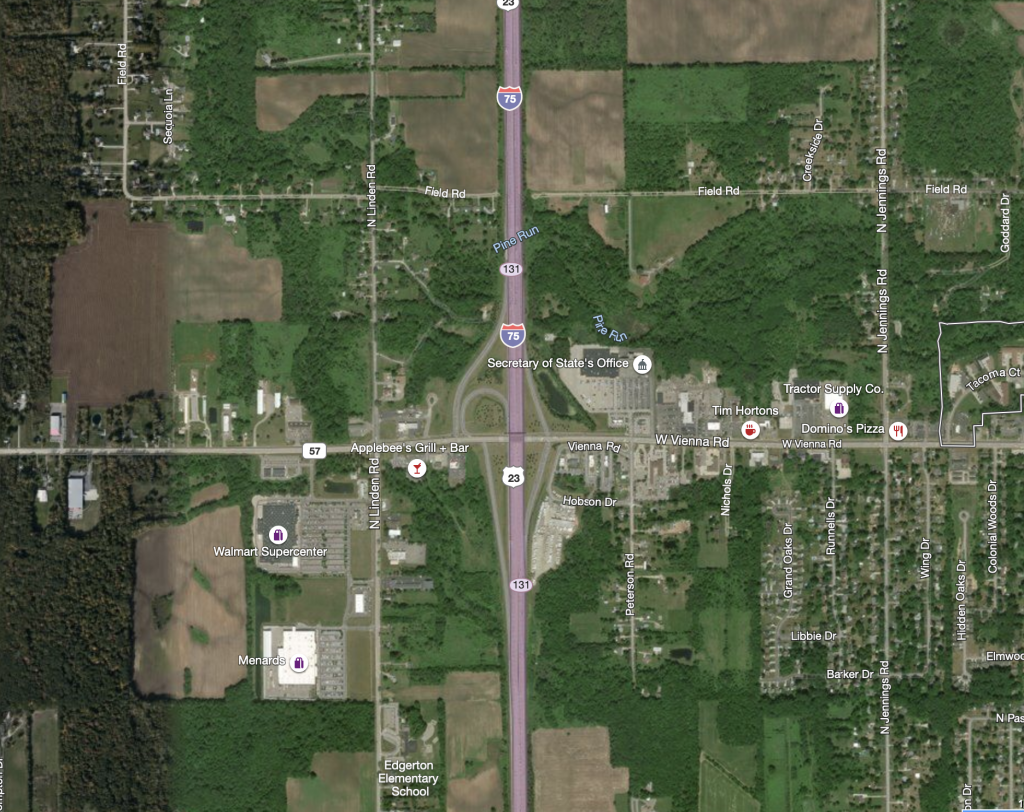 Tr. Easlick stopped Ms. Hughey on this stretch of I-75 in Genesee County, Michigan.

After Tr. Easlick ran Ms. Hughey’s vehicle and personal information through the police database, he discovered that her vehicle was improperly registered and that there was an active warrant out for her arrest due to an unpaid ticket.  Tr. Easlick asked Ms. Hughey if she had enough cash to post bond, and Ms. Hughey replied that she did not. Tr. Easlick told Ms. Hughey that he could either take her to court so she could clear up the warrant or write her citations for the lack of insurance and invalid registration. Ms. Hughey informed Tr. Easlick that because of her invalid registration and insurance, under either scenario he could not allow her to drive her car away from the scene and would need to call a tow truck.

When asked to exit the vehicle, both parties agree that Ms. Hughey did so without resistance. The dashcam footage, which was carefully reviewed, shows the top, right-side angle of Tr. Easlick handcuffing Ms. Hughey. According to Ms. Hughey, when Tr. Easlick placed her in handcuffs, he twisted her left arm behind her to meet her left wrist to her right wrist. It was this twisting motion that allegedly caused a rotator cuff injury to Ms. Hughey’s left shoulder. Ms. Hughey testified that Tr. Easlick did not check to see if the handcuffs were too tight. Ms. Hughey also did not say anything to Tr. Easlick about the alleged twisting of her arm while she was being handcuffed.  Ms. Hughey reserved those comments for her attorney at a later date.

After Ms. Hughey was in handcuffs, the two walked to the front of Tr. Easlick’s police car and she entered front passenger seat.  At no point should a suspect EVER be placed in the front seat of a cruiser!

At some point after getting into the police car, Ms. Hughey began to feel the pain in her shoulder. Ms. Hughey would later testify that she told Tr. Easlick about her pain four to five times, but he did not respond to her. According to Ms. Hughey, she did not feel the pain until she was sitting in the car with her hands behind her back. Tr. Easlick’s testimony is different on this point; he testified that Ms. Hughey told him about her left arm pain as she was getting into the police car. From the dashcam footage, there are ten minutes of recording between the handcuffing and when the audio cuts off. In these ten minutes, the two talk about several different things, such as how she is upset about being late for work and possibly losing her job, which items she wants out of her car, and where her car is being towed. There are no audible portions of the recording that capture Ms. Hughey saying anything about her arm pain.

Ms. Hughey alleges that, in carrying out the traffic stop, Tr. Easlick used excessive force and was deliberately indifferent to her serious medical needs.  Following testimony, the district court granted Summary Judgment for the Michigan State Police and dismissed the suit.  Ms. Hughey appealed to the Sixth Circuit Appellate Court which overturned the district court and remanded [sent back] the case to the district court for trial.

The Sixth Circuit Appellate Court determined that there was enough evidence to remand the case based on a previously established three prong test for excessive cases involving handcuffing at the Summary Judgment stage:

Based on depositions taken in this case, the Sixth Circuit Court determined that the first and second prongs were satisfied by Ms. Hughey.  The court also determined that there was a genuine dispute of material fact about Ms. Hughey’s injury in accordance with the third prong for analysis.  Ms. Hughey claimed that the nurse at the hospital observed marks on her wrists.  The court previously held that allegations of pain (Courtright v. City of Battle Creek, 839 F.3d 513, 519 (6th Cir. 2016)) and allegations of bruising and wrist marks (Morrison v. Board of Trustees of Green Township, 583 F. 3d 394, 401 (6th Cir. 2009)), were enough to survive the motion to dismiss, i.e. Summary Judgment stage of the lawsuit.

This case was issued by the Sixth Circuit Appellate Court which is binding in Kentucky, Michigan, Ohio and Tennessee.

Does your agency train on handcuffing?