Can a Firearm Left in a Laundry Basket Nestled Under Dirty Clothes by a Teenager be Constructively Possessed by the Dad?

Mr. Lamar Howell’s 13-year-old son came to Mansfield, Ohio from his mother’s home Columbus, Ohio sometime in October 2019. He brought a firearm that was given to him by a friend and concealed it in his backpack. Mr. Howell picked up his son in Columbus and drove him to his home in Mansfield. Mr. Howell’s son did not tell Mr. Howell about the firearm.

Mr. Howell’s son made a video at Howell’s residence that showed the boy with the firearm. Essentially, everyone with access to the video knew Mr. Howell’s son had the firearm … except Mr. Howell … at least at this moment.  This video was posted on the internet where some of the boy’s classmates watched it. Sometime on September 26, 2019, Mr. Howell was called to his son’s school concerning the video. The school resource officer, Mansfield Police Officer Matthew Brewster, contacted Detective Dave Scheurer to meet Mr. Howell at his residence. 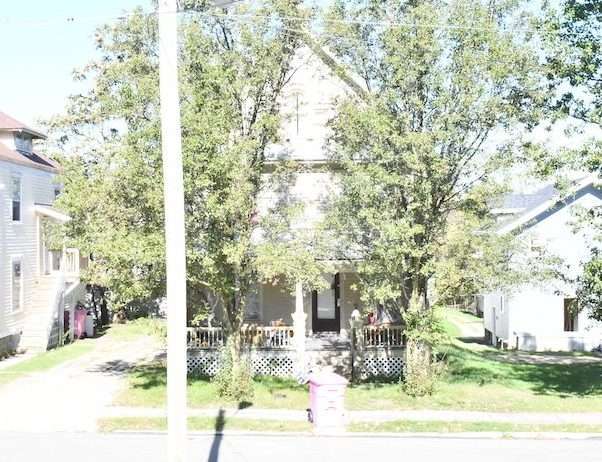 Mr. Lamar Howell lived here at 416 Sherman Place in Mansfield, Ohio.  The family laundry basket herein was the subject of his appeal.

Det. Scheurer called the school resource officer to see if Mr. Howell’s son knew the whereabouts of the handgun. Det. Scheurer was informed that the boy had stated the firearm was in the attic in a pink milk crate. Finding no pink milk crate in the attic, Det. Scheurer eventually located the handgun in a laundry basket underneath some clothing. He then arrested Mr. Howell for having a weapon while under disability. During the search incident to arrest the drugs in question were found in Howell’s pocket.

Mr. Howell filed a Motion to Suppress the firearm.  Mr. Howell maintains his awareness of the firearm arose because he saw his son’s video at the school with the resource officer, and therefore, the officers did not have sufficient probable cause to arrest him for having unlawful possession of the firearm. The trial court overruled Howell’s motion to suppress by Judgment Entry filed April 13, 2020.

On August 28, 2020, Howell entered a plea of No Contest plea to Count One: Aggravated Possession of Drugs, a felony of the second degree, with forfeiture specification, and to Count Three: Possession of a Fentanyl-Related Compound, a felony of the fifth degree. The state dismissed Count Two: Having Weapons under Disability. On Count One, Howell was sentenced to four to six years mandatory time in prison, and on Count Three Howell was sentenced to twelve months in prison, sentences to be served concurrent to each other, with three years mandatory post-release control.

Mr. Howell appealed to the Fifth District Appellate Court on the basis of: Whether there was sufficient evidence to establish that the officers had probable cause to arrest Mr. Howell for Having Weapons While under Disability. At the center of his appeal is whether Mr. Howell “constructively possessed” the handgun in the laundry basket.

The Fifth District Appellate Court began the analysis with O.R.C. 2925.01(K) that defines possession as follows: “Possess’ or ‘possession’ means having control over a thing or substance, but may not be inferred solely from mere access to the thing or substance through ownership or occupation of the premises upon which the thing or substance is found.” R.C. 2901.21 provides the requirements for criminal liability and provides that possession is a “voluntary act if the possessor knowingly procured or received the thing possessed or was aware of the possessor’s control of the thing possessed for sufficient time to have ended possession.” O.R.C. 2901.21(D)(1).

The Fifth District Appellate court determined that Mr. Howell did constructively possess the firearm based on a previous holding “The Supreme Court has held that knowledge of illegal goods on one’s property is sufficient to show constructive possession. State v. Hankerson, 70 Ohio St.2d 87, 91, (1982)”.

Does your agency train on Constructive Possession?