Andy Argues that Simply Driving and Riding in a Stolen Van is Not Enough to be Convicted of Receiving Stolen Property … But would the Sixth District Court Agree?

Here, Dean admits to being both driver—“at least one time”—and passenger—when he accepted a ride in the van, just minutes after it had been stolen. Either is sufficient to establish that Dean “received” the stolen vehicle. A driver of a stolen vehicle may be said to have exercised dominion and control of the property and therefore to have “received” it under R.C. 2913.51(A).

On Monday, June 10, 2019, Officer Corey DiModica of the Bowling Green State University (“BGSU”) Police Department “took a report” from a representative with Lake Erie Electric Company that one of its vehicles had been stolen over the weekend. The vehicle had been left, unlocked with the keys inside, at “Lot 13” of the campus parking lot the previous Friday, June 7, 2019, around 3:00 p.m. It was noticed missing from the lot on Sunday. The vehicle was described as dark blue 2001 Ford Econoline van with a wide grey stripe at the bottom. According to the record, Lake Erie Electric has worked on campus “nonstop” for the last twelve years, and it uses the van to shuttle employees from Lot 13 to various project sites on campus.

BGSU Police Detective Robert Coulson reviewed a surveillance video from a camera that overlooks Lot 13. Lot 13 is open to the public and runs along, and to the north of, Wooster Street. According to Detective Coulson, the video showed the van exiting Lot 13, onto a campus road, and then turning east onto Wooster Avenue, at 12:54 p.m. on Sunday, June 9, 2019.

After observing the video, Detective Coulson visited three nearby gas stations, all on Wooster Avenue, to see if the surveillance cameras used by those companies had any footage of the van. He found that the camera from “BP” had footage of what appeared to be the same van.

Upon review, the five-minute video clip, which was shown to the jury, shows the van first appearing at 12:55 p.m., headed east on Wooster. The van slows and then turns to the south, onto a public roadway that is adjacent to the BP parking lot. The van remains on the public roadway and disappears from view within a few seconds. Five minutes later, at 1:00 p.m., the van reappears on the same roadway, this time headed north, back to Wooster, where it turns west and drives away. Detective Coulson agreed that it was not possible to see the occupant(s) of the van. 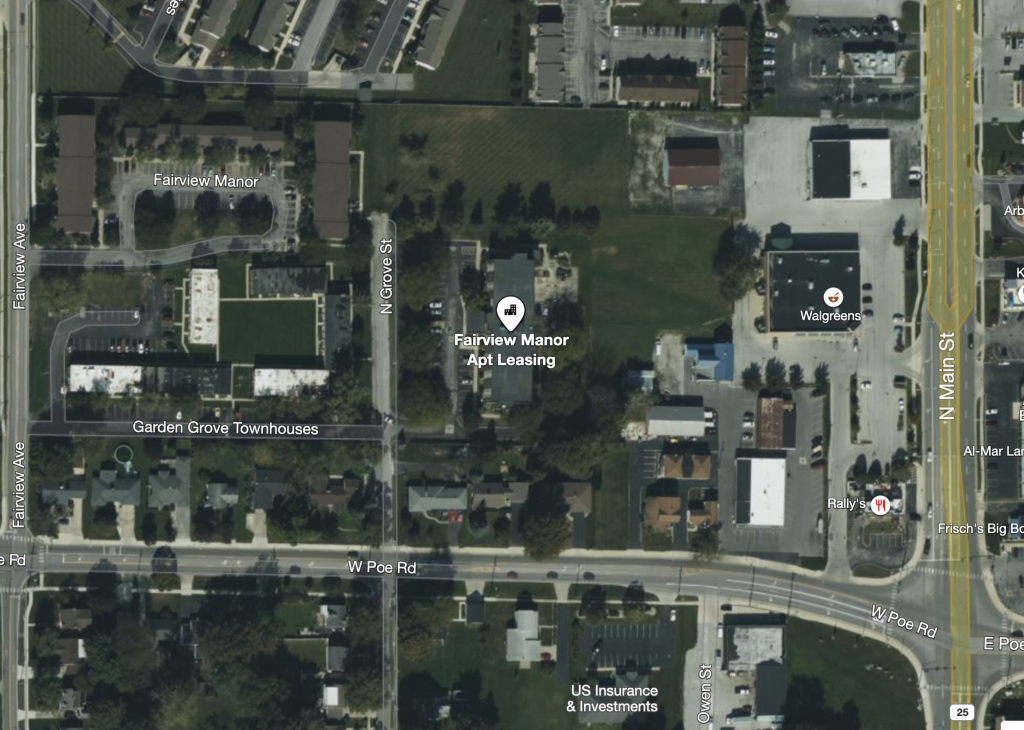 Campus police had the van towed and secured in a fenced-in area on campus. While searching the van, Detective Coulson found two pieces of evidence on the console that tied the defendant-appellant, Mr. Andrew Dean, directly to the van. First, he found a paper receipt with Mr. Dean’s name on it, indicating a $100 transfer had been made to him that same day, June 13, 2019 at 6:17 p.m. The receipt was from Walmart on Navarre Avenue, in Oregon, Ohio. 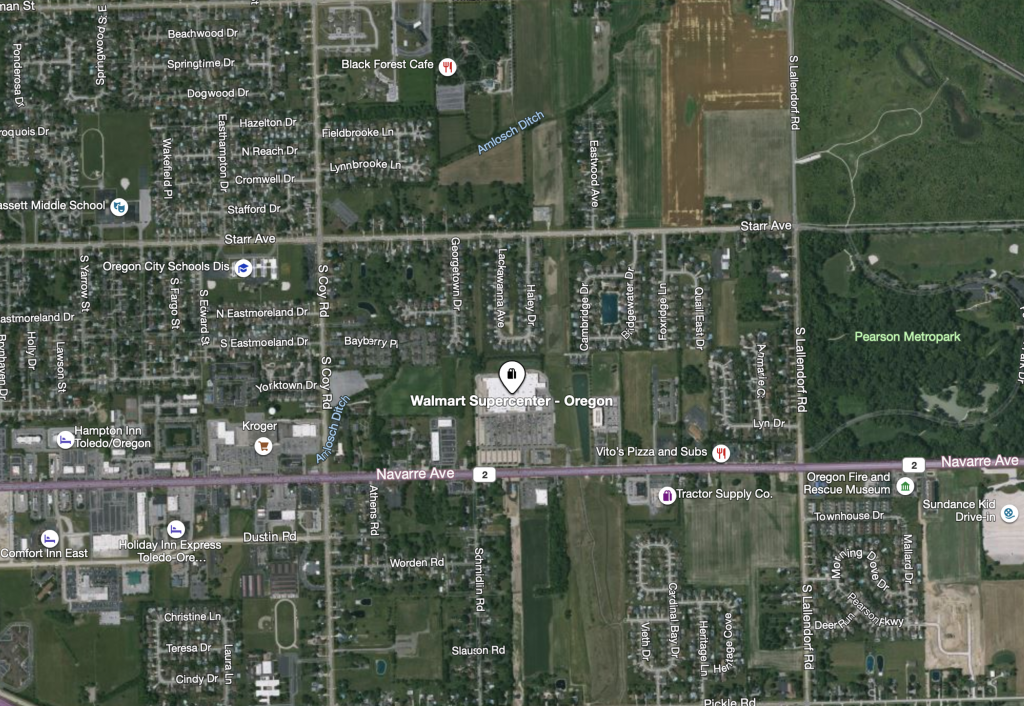 Mr. Dean obtained a $100 money transfer at Walmart, located at 3721 Navarre Avenue, Oregon, Ohio 43616. Later this money transfer would provide circumstantial evidence that Mr. Dean was in the stolen van.

Det. Coulson contacted Walmart to ask for its assistance in reviewing their surveillance footage from its Navarre Avenue store. Mr. Lou Vaughn works as an asset protection associate for Walmart. At trial, Mr. Vaughn identified eleven brief video clips that were taken from various surveillance cameras on June 13, 2019 and five “still shots” that were created from the video clips.

First, Mr. Vaughn identified a video clip and picture that appears to be the van at issue moving throughout the parking lot at 6:10 p.m. Through the driver side window, which was open, the driver of the van appears to be wearing a royal blue shirt but is otherwise obscured from view. Mr. Vaughn testified that it was not possible to determine whether there were any other occupants in the van at the time.

Mr. Vaughn identified video clips and pictures that show Mr. Dean, dressed in a royal blue short-sleeved shirt that “match[ed]” what the unidentified driver wore, enter the store at 6:11 p.m. It is alleged that at that time Mr. Dean still possessed the identification card he would later leave in the stolen van.  Mr. Dean is shown walking directly to a deli case, selecting a sandwich, and then to the customer service counter. At 6:19 p.m., Mr. Dean exits the store. Mr. Vaughn reviewed customer service records and confirmed that, while at the customer service counter, Mr. Dean received a “money transfer for $100.”.

Next to testify was Mr. Chris Hepner, who is a Lake Erie Electric project manager. Mr. Hepner testified that the Econoline van was “decaled” with magnetic signs advertising the company’s name. The signs were approximately two feet by two feet and

were affixed to the driver side and passenger side doors. Mr. Hepner testified that the signs “never come off,” but after he was shown that the van was recovered with one of the signs inside the van, he agreed that they were “removable.” Mr. Hepner also testified that the van’s gas gauge did not function properly and therefore, the company foreman manually tracked the mileage to prevent it from running out of gas. After the van was recovered, Mr. Hepner was told that it had gone through about “two or three tanks of gas,” which he “assumed” was the equivalent of about 600 miles.

Finally, Mr. Dan Van Vohris with the Ohio Adult Parole Authority testified. Mr. Van Vohris is Dean’s parole officer. On June 9, 2019, the day of the vehicle theft, Mr. Van Vohris “received a call that [Mr. Dean] was out by the Days Inn in Bowling Green, trying to find a ride.” Although Mr. Dean “was free to go wherever he want[ed] at that point,” Mr. Van Vohris decided to conduct “supervision” of him. So, Mr. Van Vohris went to the Days Inn “to see what was going on or who he was with.”

[Mr. Dean] explained there [were] two other people that were involved. He wasn’t really in a position to positively ID who they were. But he acknowledged that a [Chrysler] Neon with two people in it went into [BGSU Parking Lot 13]; one person left in the Neon, one person left in the van, and then the van came over, and he got in it by the BP.

When told that his ID card had been located in the van, Mr. Dean responded, “Oh, that’s where I left it,” and he lamented, “I can’t believe I left my ID in the van.”  Spoiler alert – later the court would believe he left it in the van.  Mr. Dean also admitted to driving the vehicle “at least one time.” Although Mr. Dean claimed not to recall “doing a money transfer” at the Walmart in Oregon, he “acknowledged being at [that store].” According to Mr. Van Vohris, Mr. Dean has lived in Wood County for the entire twelve years that he has known him. Also, Mr. Dean was known to “hang with” people who live at Fairview Manor apartment complex, which is located on North Grove Street, “adjacent” to where the van was recovered.

The jury found Mr. Dean guilty, and the trial court convicted him and proceeded directly to sentencing. It imposed a prison sentence of 18 months, plus an additional 708 days for violating the terms of his post-release control in another case, Wood County Court of Common Pleas case No. 2015CR239. The court ordered that the terms be served consecutively to one another, pursuant to R.C. 2929.141.

Mr. Dean appealed, alleging that the evidence presented at trial was insufficient to support a conviction for Receiving Stolen Property.  Mr. Dean rested his argument that simply driving the stolen van does not rise to “Receiving Stolen Property”.  Here, the Sixth District Appellate Court dismissed Mr. Dean’s feeble argument when it held “Here, Dean admits to being both driver—“at least one time”—and passenger—when he accepted a ride in the van, just minutes after it had been stolen. Either is sufficient to establish that Dean “received” the stolen vehicle. A driver of a stolen vehicle may be said to have exercised dominion and control of the property and therefore to have “received” it under R.C. 2913.51(A).”.

Information for this article was obtained from State v. Dean, 2021 – Ohio – 766.  The case was decided on March 12, 2021.  This decision is binding on all Sixth District counties: Erie, Fulton, Huron, Lucas, Ottawa, Sandusky, Williams and Wood.  For the rest of the state this case is considered persuasive.  Law enforcement agencies in other counties do not have to follow the decision as it is considered instructive.

Killing, Bad Driving and a Caring Deputy Lead to a New Legal Doctrine

Do Officers Have a Legal Duty to Explain the Inventory Policy to a Fentanyl Dealer [or anyone else] while in the Middle of an Intersection at a Crash Scene?