How Many Judges Does it Take to Find a Search of a Hidden Compartment in a Motor Vehicle Lawful?

In Cuyahoga County the correct answer is … seven!

Turning to the evidence found after Officer Sirl removed a portion of the dashboard, as discussed in the prior section of this opinion, the en banc majority of this court concluded that after finding marijuana in the passenger compartment and searching behind the “visibly displaced panel of the dashboard/center console,” this search did not exceed the scope of the officers’ probable cause.

On Saturday July 14, 2018 Westlake Police Officer Nicholas Ribich was behind Mr. George Taylor’s car, traveling westbound on Interstate 90. Due to the position of the license plate holder of the vehicle, the validation and expiration stickers of the plate were not visible, contrary to Westlake Ordinance § 335.09 and O.R.C.§ 4503.21. Because Officer Ribich could not see the two required stickers, he conducted a traffic stop near Bradley Road. 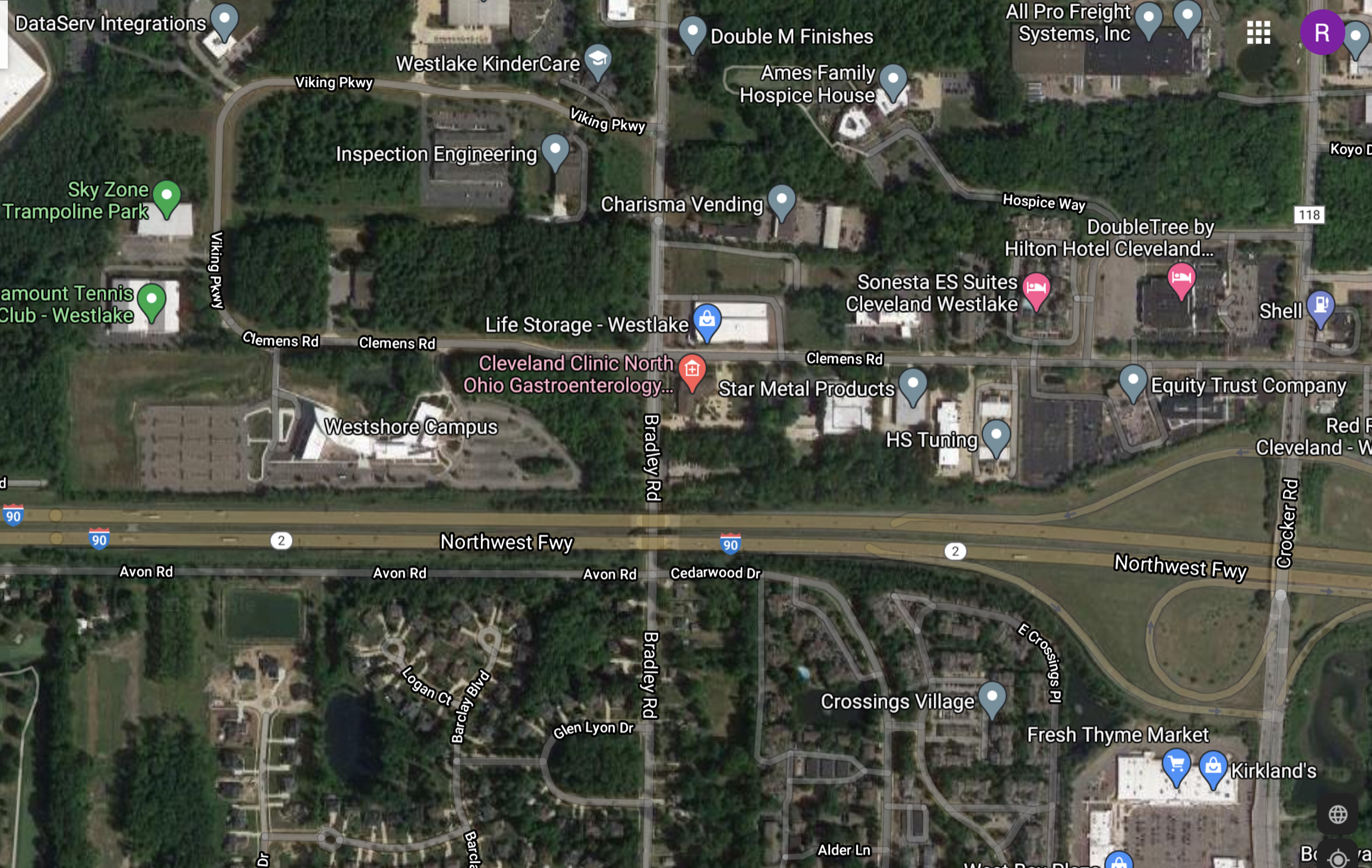 Officer Nicholas Ribich stopped Mr. George Taylor on I-90 near Bradley Road.  This convicted felon with active warrants had a hidden compartment with a gun and extended magazine nestled inside.  But the compartment would not remain hidden for long.

On cross examination Officer Ribich acknowledged that he could see that the two stickers were the color of the current year’s validation stickers, but they were partially covered. Officer Ribich ran the license plate number through his vehicle computer and learned that the registration was valid and up-to-date.  This line of questioning by the defense attorney was a feeble attempt to obtain a judgment that the traffic stop was unlawful.  This would not be the last argument lost by the defense attorney.

Officer Ribich, testified that he smelled the odor of marijuana during the traffic stop which established probable cause to search the car. He requested backup prior to searching the car and Officer Jarod Sirl responded. Officer Ribich subsequently learned that there were three outstanding warrants for Mr. Taylor.

After additional officers arrived, Officer Ribich began his search and discovered a rubber insert inside the center console.  Beneath the rubber insert was a plastic bag with marijuana and a bag with loose 9 mm ammunition. Mr. Taylor was questioned regarding the ammunition and any illegal contraband and denied having possession of a firearm.

Upon finding the ammunition, Officer Ribich Mirandized Mr. Taylor and began asking him questions regarding if a gun would be found in the vehicle. (The trial court then questioned Officer Ribich as follows:

COURT: You testified to the questions of the effect of is there a gun in the car? WITNESS: Yes.

COURT: It’s your sworn testimony that those questions – was that question was asked after Miranda?

WITNESS: I’m not entirely sure if he knew I found ammunition. I Mirandized him. At some point I let him know that ammunition was found and where was the gun at. To me if have you [sic] this ammunition tucked away, there would be a firearm, too. So he at some point – or I advised him I found ammunition and that’s why I was asking about if there was a gun in the car.

There were two male passengers in the Dart. One also had warrants and the other was released.  Officer Sirl took over the inventory and as he was looking in the back-seat area looked up front.  At that time he observed a separation between the dashboard and center console that was “kind of separated and noticeably sticking away.” Officer Sirl was about to play felony peek-a-boo with Mr. Taylor.  Officer Sirl removed the panel of the dashboard and found two magazines for a pistol, one of which was an extended magazine and a 9 mm Taurus handgun.  Mr. Taylor feigned surprise and denied that the firearm was his own.  Later, Mr. Taylor did admit to a detective that he had secreted the firearm in the not-so-hidden compartment. 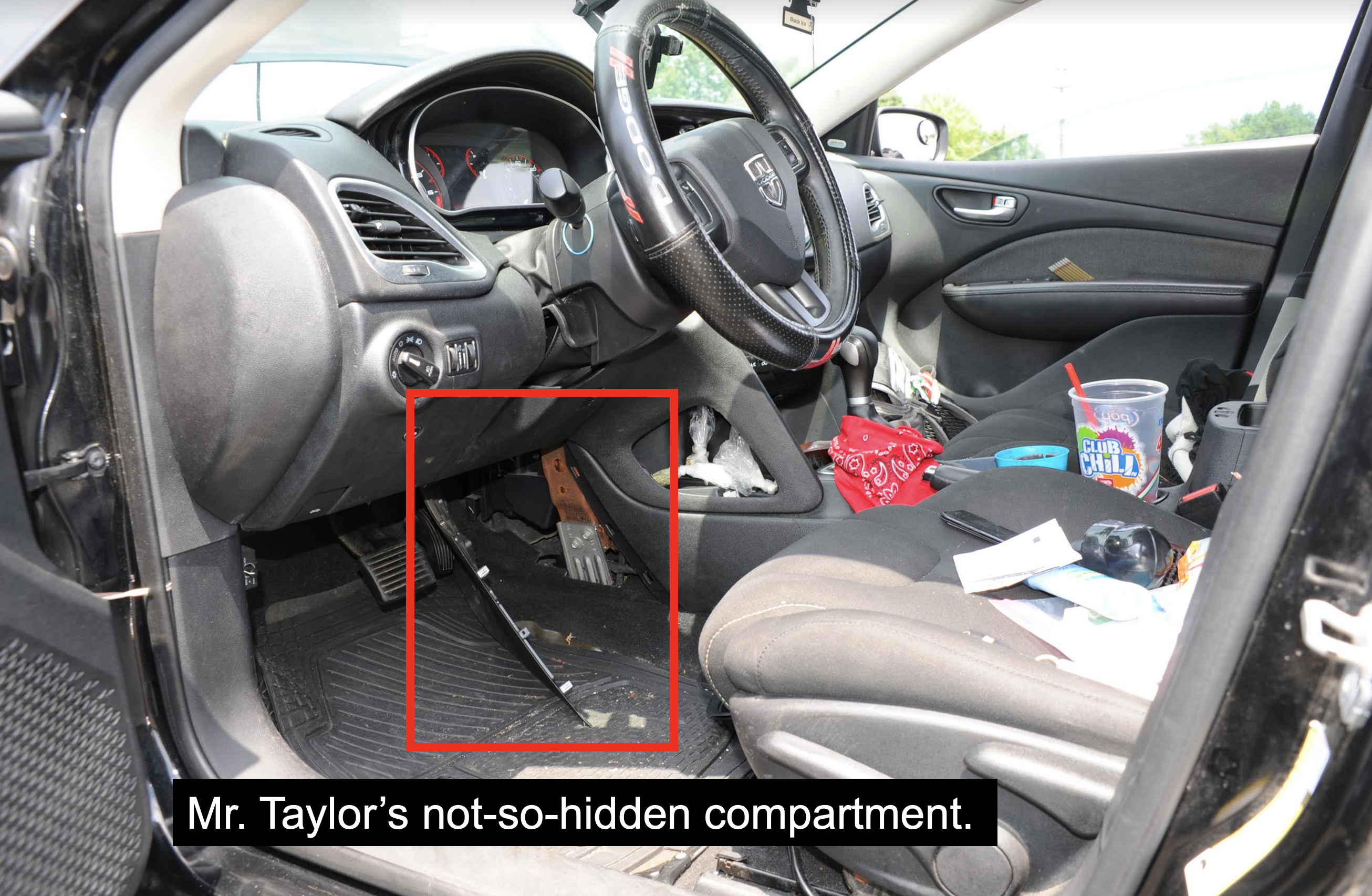 Officer Sirl’s keen eye seen this hidden compartment because Mr. Taylor failed to secure the pieces of the car together tightly.  Soon Mr. Taylor would have his own ‘Club Chill’ at the local jail. Photo is courtesy of the Westlake Police Department.

Mr. Taylor was charged with Drug Abuse, Carrying a Concealed Weapon and Weapons Under Disability as he was a convicted a felon. 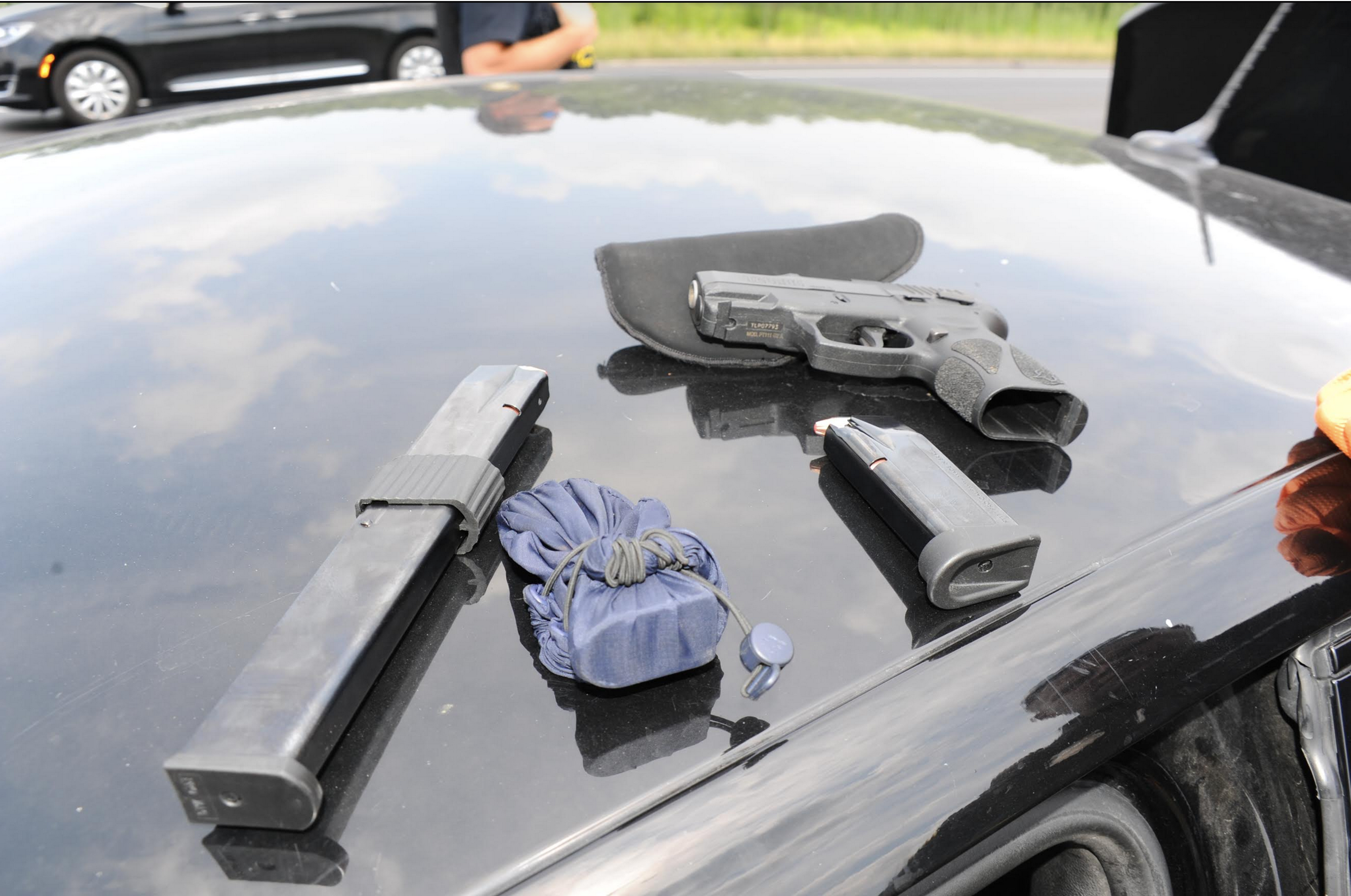 Officer Ribich and Officer Sirl may have saved many lives by arresting felon emeritus George Taylor.  The firearm was ready-at-hand in the not-so-hidden compartment with lots of ammunition, to include the extended magazine.  Photo is courtesy of the Westlake Police Department.

Mr. Taylor filed a Motion to Suppress which was denied by the trial court.  He plead No Contest was found guilty.  Mr. Taylor filed an appeal to the Eighth District Appellate Court which held the traffic stop was lawful, but the dismantling of the center console violated the Fourth Amendment.  The Eighth District Appellate Court decided a different case in 2014 with similar facts in State v. Franklin, 2014 – Ohio – 1422, but held that a similar search did NOT violate the Fourth Amendment.

Thereafter, the State of Ohio filed an appeal in the Taylor case which was heard by an en banc court in the Eighth District.  Ultimately, the Eighth District en banc court overturned the original three judge panel when it held “Turning to the evidence found after Officer Sirl removed a portion of the dashboard, as discussed in the prior section of this opinion, the en banc majority of this court concluded that after finding marijuana in the passenger compartment and searching behind the “visibly displaced panel of the dashboard/center console,” this search did not exceed the scope of the officers’ probable cause.”.

Information for this article was obtained from State v. Taylor, 2020 – Ohio – 5079 and a phone interview with Westlake Police Officer Jarrod Sirl on Tuesday February 23, 2021.

This case was issued by the Eighth District Appellate Court which is binding in Cuyahoga County.

Does your agency train on the difference Probable Cause and Hidden Compartments in Motor Vehicles?