Why was Mickey’s Mouse Felonious?

Approximately ten feet from where Mr. Mickey had been arrested by Officer Ball and Sgt. Hirsch found an unusually heavy black computer mouse. The mouse could be opened, and once opened, it was revealed to be a digital scale with white residue all over it. Both the mouse and the bag of white powder were sent to the Hamilton County Crime Lab to be tested. The bag turned out to be 31.448 grams of fentanyl and the residue on the scale tested positive for cocaine and fentanyl. This is why Mickey’s Mouse was felonious.

On Saturday February 3, 2018, at 12:00 p.m. Miami Township Police Officer Todd Taylor was on patrol and had just driven through the Pebble Brooke Apartment complex in Milford, Ohio that was known for its high drug activity.

At some point during their struggle, Mr. Mickey broke free from Officer Taylor. Officer Taylor was able to grab the back of Mr. Mickey’s hoodie and the two ended up in the middle of the parking lot. While ignoring Officer Taylor’s repeated instructions to stop resisting, Mr. Mickey threw something in the air and screamed “Get this! Help!” to the unidentified man in the breezeway.

Mr. Mickey was placed in a police cruiser and the officers went to search the gray Accord. Upon re-approaching the vehicle, Officer Taylor noticed there was a young woman in the back seat. Officer Taylor had not seen her earlier due to the vehicle’s heavily tinted windows. The woman, who was Mr. Mickey’s girlfriend who was nineteen years old, had a small amount of marijuana and alcohol in her purse. She was charged with marijuana possession and underage consumption before being driven home by officers. There is no indication that her name was Minnie.

During Officer Taylor’s search of the gray Accord, he found a loaded 9 mm Kahr handgun with a bullet in the chamber underneath the front passenger seat where Mr. Mickey had been sitting. Testing later revealed that the handgun was operable. Officer Taylor questioned Mr. Mickey about the firearm, and he admitted that the handgun was his and that he kept it for protection purposes as he had previously been shot.

In the center console of the gray Accord, Officer Taylor found a bag containing a white powdery substance that appeared to be cocaine, heroin, or fentanyl. Officer Taylor did not initially see it when he observed the baggie of marijuana, also in the center console, as the fentanyl was further inside the console and out of plain view. After testing by the Hamilton County Crime Lab, the powder was confirmed to be 31.448 grams of fentanyl.  Officer Taylor explained the bag was accessible to someone sitting in the passenger seat and nothing had to be moved in order for him to see it sitting in the console. The bag was sitting on a large stack of Ohio lottery cards, which are often used as bindles to package drugs for sale. Mr. Mickey denied that the bag of white powder was his own though previously admitting the firearm under the seat was.

While Officer Taylor was searching the gray Accord, additional officers arrived on scene. Sergeant Robert Hirsch and Officer Murray attempted to locate “breezeway man” that Officer Taylor had seen standing previously. Despite knocking on apartment doors and searching the nearby area, the officers were unsuccessful in locating the male. 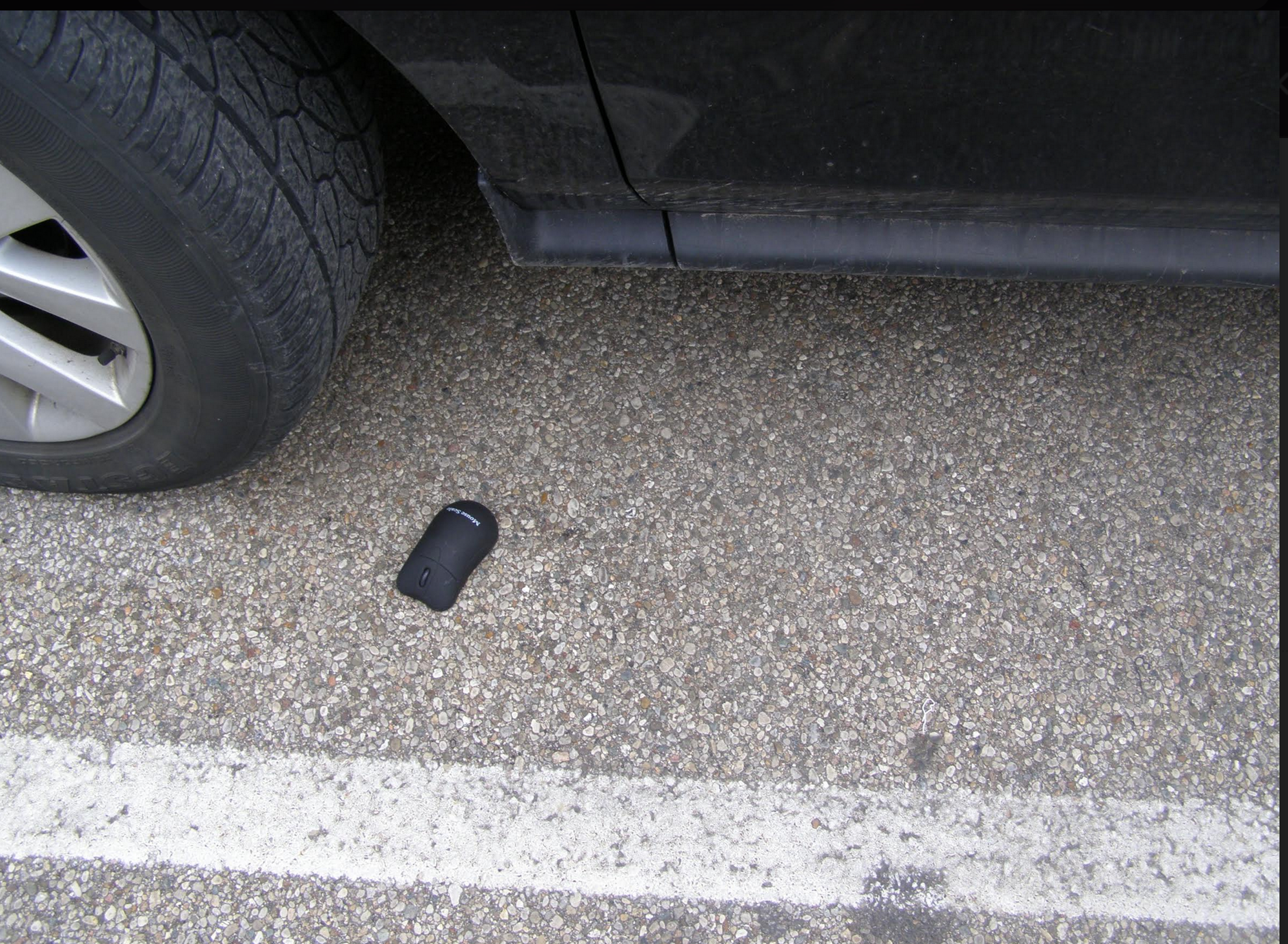 The computer mouse was found next to a parked car on the ground.  Photo is courtesy of Lt. Robert Hirsch.

The mouse could be opened, and once opened, it was revealed to be a digital scale with white residue all over it. Both the mouse and the bag of white powder were sent to the Hamilton County Crime Lab to be tested. The bag turned out to be 31.448 grams of fentanyl and the residue on the scale tested positive for cocaine and fentanyl. This is why Mickey’s Mouse was felonious. 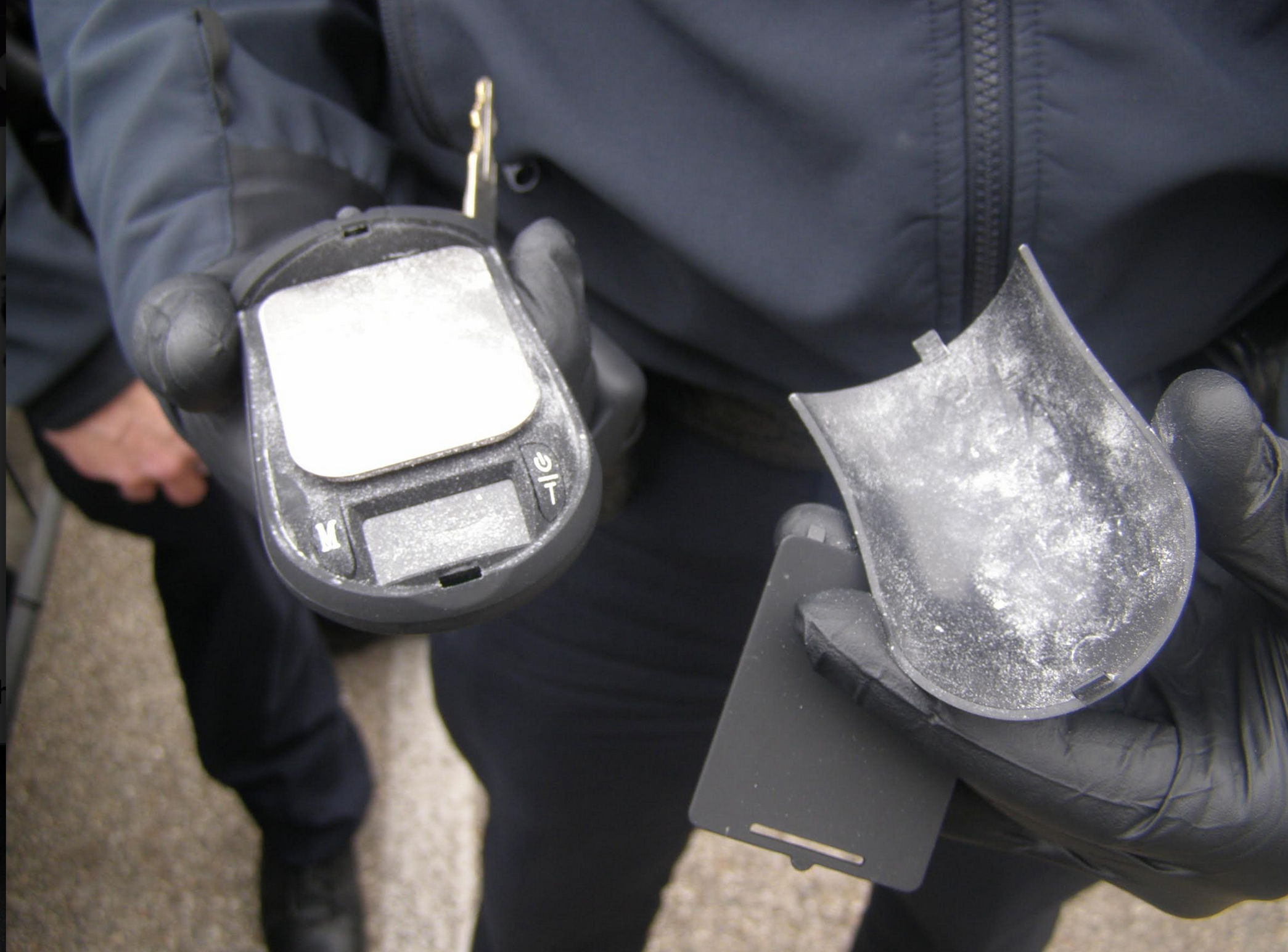 The day after the crime scene was processed and Mr. Mickey was arrested, the police received a phone call from a man claiming to be the driver of the gray Accord. The man stated that his name was that of famed UFC fighter Mr. Demetrious Johnson whose nickname is ‘Mighty Mouse’.  Though this man stated he would come in for questioning, he never reported to the police department. *Sigh – Mickey’s friend did not turn out be Mighty Mouse.

Mr. Mickey was indicted for:

Improper Transportation of a Firearm in a Motor Vehicle 2923.16(B) F-4

Mr. Mickey did not file a Motion to Suppress but did opt for a bench trial in front of a judge.  The trial lasted two days and on February 19, 2019 Mr. Mickey was found guilty and sentenced to five years in prison.  He appealed his conviction, in part, on whether or not he possessed the drugs in the center console of the Honda.  The court held “[A]s the bag of fentanyl was visible to appellant and was within close proximity to his reach, there was evidence to support the trial court’s conclusion that appellant was conscious of the drugs and that he had the ability to exercise dominion and control over the drugs.”.  The court reached this conclusion by stating that Mr. Mickey, though he did not have actual possession of the fentanyl he did have Constructive Possession “Constructive possession exits when one is conscious of the presence of the object and able to exercise dominion and control over it, even if it is not within one’s immediate physical possession.”. See State v. Graves, 2015-Ohio-3936. 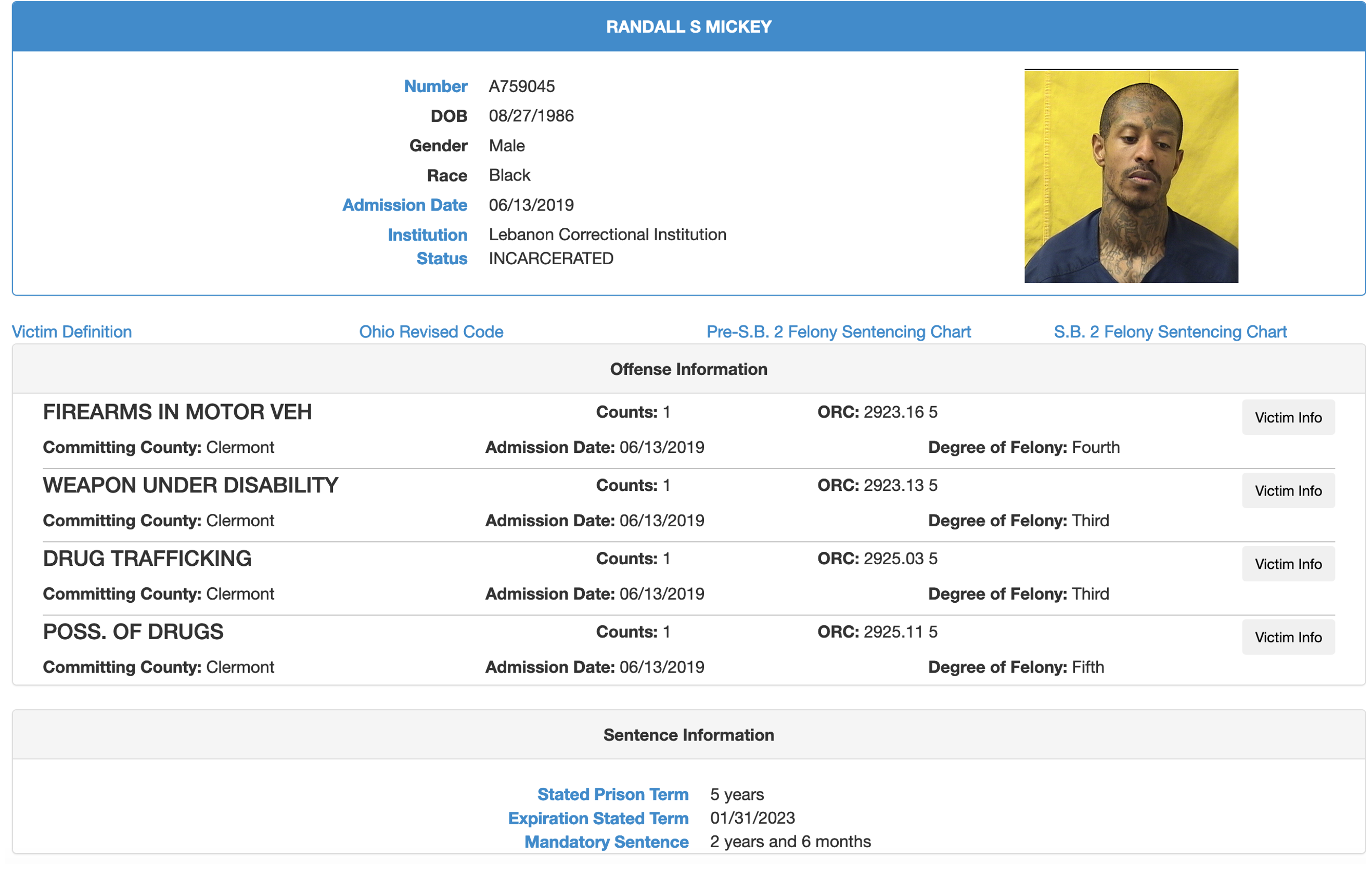 Mr. Mickey is mouse-free while serving his sentence at Lebanon Correctional Institute.

This case was issued on April 13, 2020 by the Twelfth District Court of Appeals which is binding in the following counties: Brown, Butler, Clermont, Clinton, Fayette, Madison, Preble and Warren.

Does your agency train on the Constructive Possession?