Julian’s Bar was in a High Crime Area But Was that Enough to Conduct an Investigatory Stop?

“[A] citizen should not be harassed by police while engaging in lawful activity, even if the lawful activity occurs at night and in a high-crime area.”. Id at 606.

On Friday December 15, 2006, at 1:15 am, Mr. Michael Young was sitting in a reclined position in the passenger seat of a car in a city-owned parking lot outside of Julian’s Bar & Restaurant, 2053 South Division South, in Grand Rapids, Michigan. Located at the corner of Division Avenue South and Andre Street Southwest, which is less than a block south of Julian’s. The lot was regularly used for parking by patrons of Julian’s, but the area also had a recent history of violent crime, including assaults and shootings. 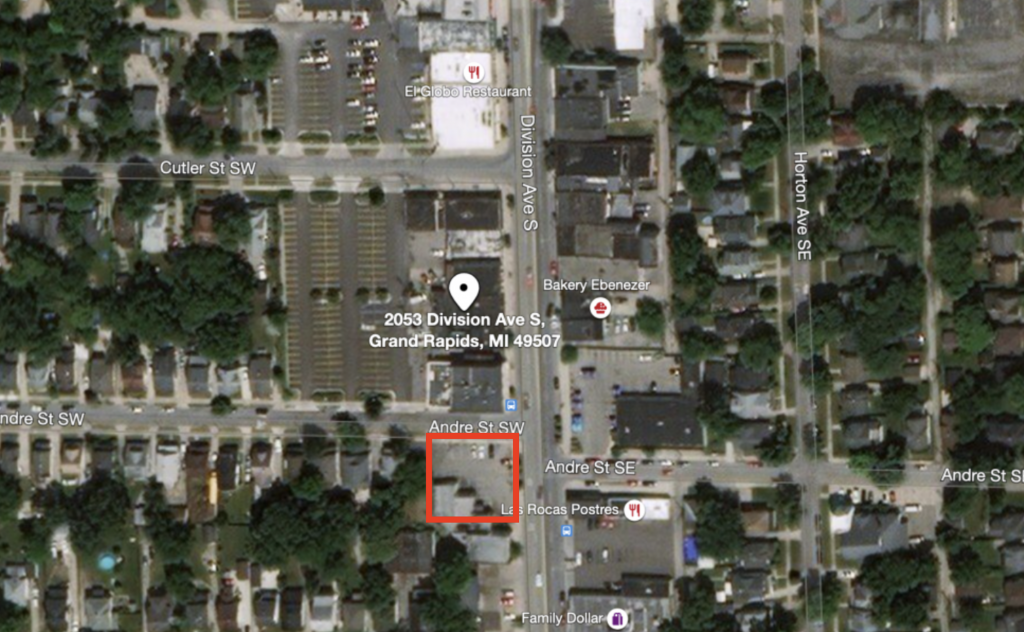 Officers testified that a person who waits outside is more likely to have a gun because Julian’s regularly conducts pat-downs of its patrons; they also testified that officers look for people loitering because “that’s usually how problems start.” Given the city’s loitering and trespassing ordinances, it would have been a crime for someone to be in the parking lot without having business at the adjacent establishments. See City of Grand Rapids Code of Ordinances § 9.133. 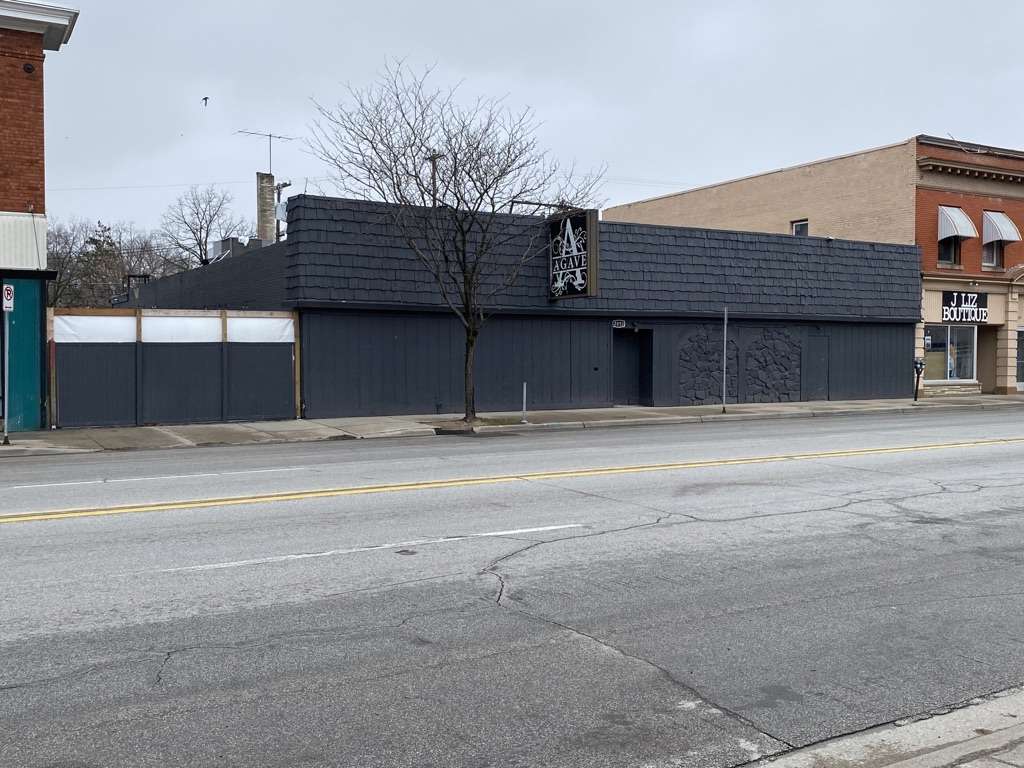 This is Julians Bar and Restaurant located at 2053 South Division South, in Grand Rapids, Michigan.  The location is now known as Agave, which is only one letter short of A Gavel.  In 2006 to gain access to this establishment the protocol was that each patron must submit to a pat down prior to entering.  This requirement was based on the number of fights, shootings and other indiscriminate violence that would occur within and outside of the building. In short Julians WAS a high crime area.  Photo courtesy of Mr. James McGarvey.

Police Officers Fannon and Johnson described pulling into the parking lot and parking their patrol car behind the car in which Mr. Young sat. The officers observed Mr. Young for approximately a minute and a half and then approached the car as they were joined by Officer Loeb and began looking through the windows with flashlights. Officer Fannon tapped the passenger side window with a flashlight. After a fifteen second pause, Mr. Young rolled down the window and Officer Fannon asked Mr. Young for identification. 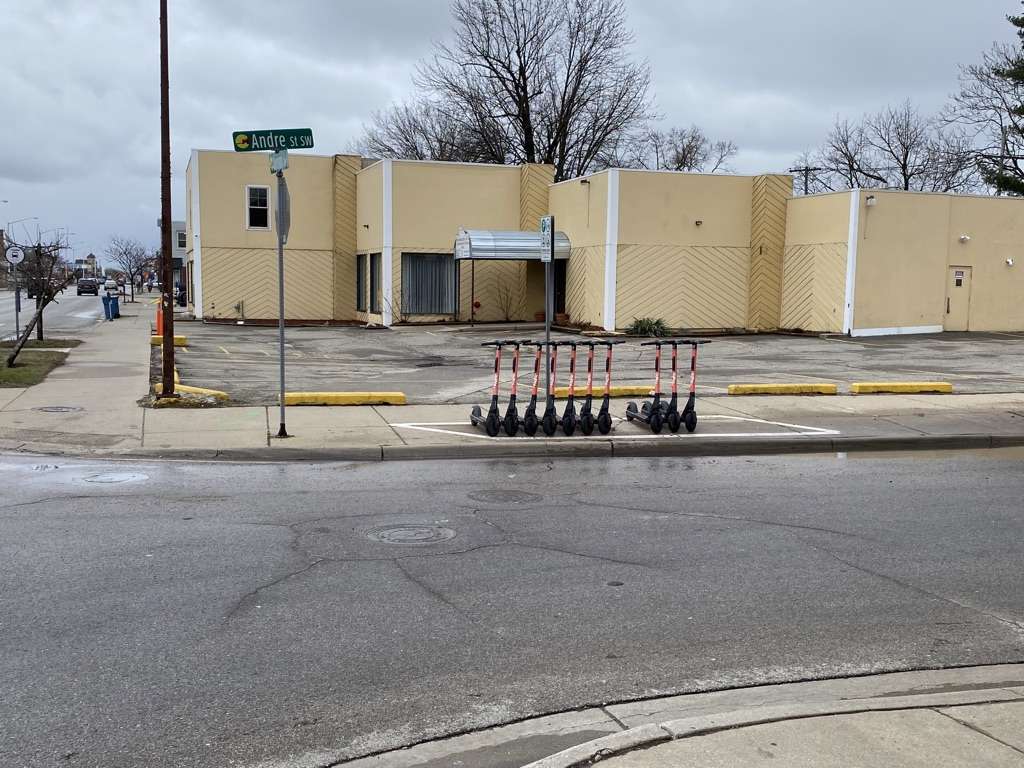 This is the parking lot located at the corner of Division Avenue South and Andre Street Southwest, which is less than a block south of Julian’s, where Mr. Young was parked. Photo courtesy of Mr. James McGarvey.

Officer Fannon then asked Mr. Young, “You just chillin’ out here in the lot or what?” Mr. Young responded, “I fell asleep and he ran in.” Officer Fannon asked Mr. Young where he lived, Mr. Young answered, and Officer Fannon asked, “What brings you here tonight?” Mr. Young responded that he was “gonna go get something to eat” with a friend named Eric. As Mr. Young explained during the suppression hearing, his friend had gone into Julian’s to inquire about whether they could get a table or take-out. A few seconds later, he identified his friend, Eric, who was approaching the vehicle. Officers told Eric to go back into the restaurant and told Young to “sit tight.” Around this time, Officer Fannon passed Mr. Young’s license to Officer Johnson, who took it back to the police car to run a warrant check.

Shortly thereafter, Officer Fannon told Mr. Young that the reason they made contact is because he was not allowed to sit in a vehicle in this city-owned lot, that “you gotta do business at the store, whatever, you gotta go in, can’t, can’t be out here sitting,” and “we’re just going to sit tight for a second and we’ll get you on your way.” Officer Fannon then asked about past arrests, and Mr. Young told him about a 1994 drug-related arrest.

Officer Fannon testified that around this time he noticed that Mr. Young moved his left hand a few times, briefly touching the area near his pocket and that this made him suspicious that Mr. Young might have a weapon or contraband. He told Mr. Young to keep his hands where he could see them and asked whether he had any weapons; Mr. Young responded “No.” Spoiler alert: Mr. Young is a liar.  Officer Fannon testified that the gestures continued, so he reached for his weapon. He then asked Mr. Young to step out of the car.

Once Mr. Young was out of the car, Officer Fannon told him to turn around. Mr. Young then disclosed that he had a gun in his pocket. The officers searched his person, retrieved the gun, and placed him in handcuffs. Around this time, Officer Johnson returned with Mr. Young’s license and notified the others that Mr. Young had an outstanding arrest warrant. The entire incident lasted less than four minutes.

Mr. Young was charged with being a felon in possession of a firearm. He filed a motion to suppress the gun on Fourth Amendment grounds, arguing that the officers had no reasonable basis to approach a legally parked car in a public parking lot and that Mr. Young did nothing during the encounter to suggest he had done anything illegal. The district court denied the motion, reasoning that there was no seizure— and thus Fourth Amendment considerations did not apply— until Mr. Young was ordered out of the car, by which time the officers had the justification of “furtive gestures.” Even if Mr. Young was seized earlier, the court found that the parking lot’s recent history of shootings, the fact that Julian’s conducts pat-downs of patrons, a possible trespassing violation, and the fact that Young was dozing gave the officers the authority to at least approach the vehicle and request identification to check for warrants. The court held that officers had authority to detain Young while checking for warrants and to arrest him for the outstanding warrant, and that this would have led to discovery of the gun absent anything else that occurred. Mr. Young pled guilty and was sentenced to 180 months in prison.  He appealed to the Sixth Circuit which overturned his conviction as it held “[A] citizen should not be harassed by police while engaging in lawful activity, even if the lawful activity occurs at night and in a high-crime area.”. Id at 606.

Julian’s Bar was in a High Crime Area But Was that Enough to Conduct an Investigatory Stop? The answer is now clear – NO.

He leaned over to his right and reached in the glove compartment.

He leaned forward and reached under the front seat to either retrieve or hide an object.

He leaned to his right and reached underneath the passenger seat.

Any of these statements could be articulated as a ‘furtive movement’ but describing what the suspect actually did is much more helpful for the officer to recall what the suspect did, assist the court in establishing reasonable suspicion and ultimately holding the suspect accountable for their criminal behavior.

Does your agency train on Investigative Detention and High Crime Areas?