Glenn had Enough BudWeis(N)er for a .185 BAC But Was the Traffic Stop Lawful?

“[A] telephone tip can, by itself, create reasonable suspicion justifying an investigative stop where the tip has sufficient indicia of reliability.” Id at 296

On Wednesday August 20, 1997, at approximately 4:30 p.m. City of Maumee Police Dispatcher Rob Bunce received a phone call from a witness who identified himself as Tim Mathey who stated he was behind a white Pontiac Grand Prix with an Ohio License Plate UHM 115.  Mr. Mathey provided his cell phone number and home phone number. The Grand Prix was traveling northbound on Conant Street which is State Route 20 in Maumee, Ohio.  The vehicle had only one occupant and he was weaving all over the road.  Dispatcher Bunce dispatched Officer Tim Roberts to the location; he was driving Cruiser #34.  Officer Roberts was traveling southbound on Conant Street while receiving updates from Dispatcher Bunce.  When Officer Roberts was to intersect with the vehicle a train was blocking northbound traffic, so he pulled into a parking lot and waited for the train to pass.  Once the train passed, he observed the white Pontiac Grand Prix with Ohio UHM 115 driving northbound on Conant Street. 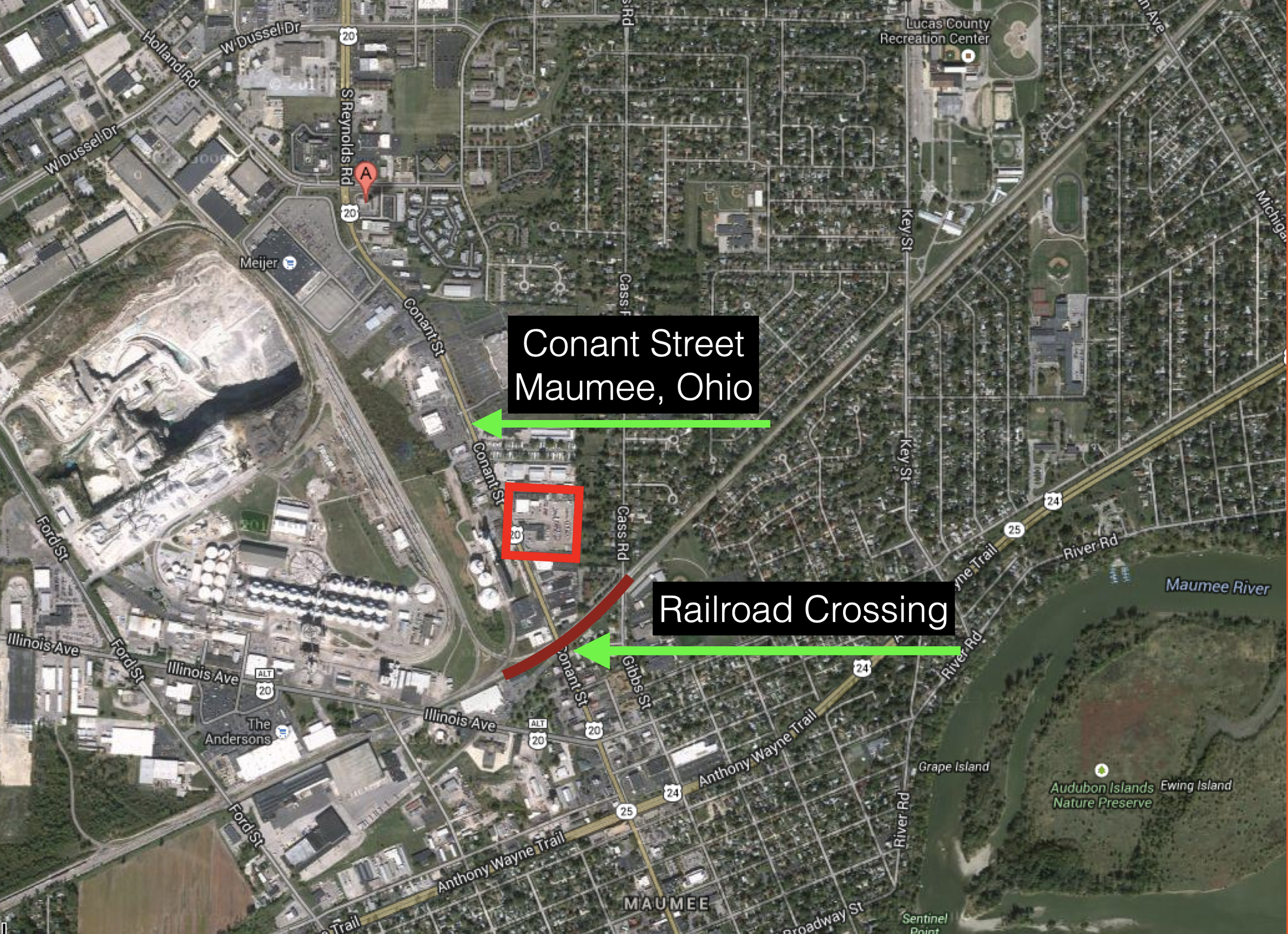 Officer Roberts parked in the lot that is identified by the red square until he seen the suspect vehicle pass and then the officer followed .  At no time did Officer Roberts observe a traffic violation.

Officer Roberts followed the suspect vehicle for a moderate amount of time but did not observe ONE SINGLE TRAFFIC VIOLATION.  Based upon the original phone call from Mr. Mathey stating the driver was weaving all over the road but without corroboration, Officer Roberts initiated a traffic stop.  The driver, later identified as Glenn Weisner, pulled over in the Fazoli’s Restaurant parking lot, located at 1398 Conant Street. 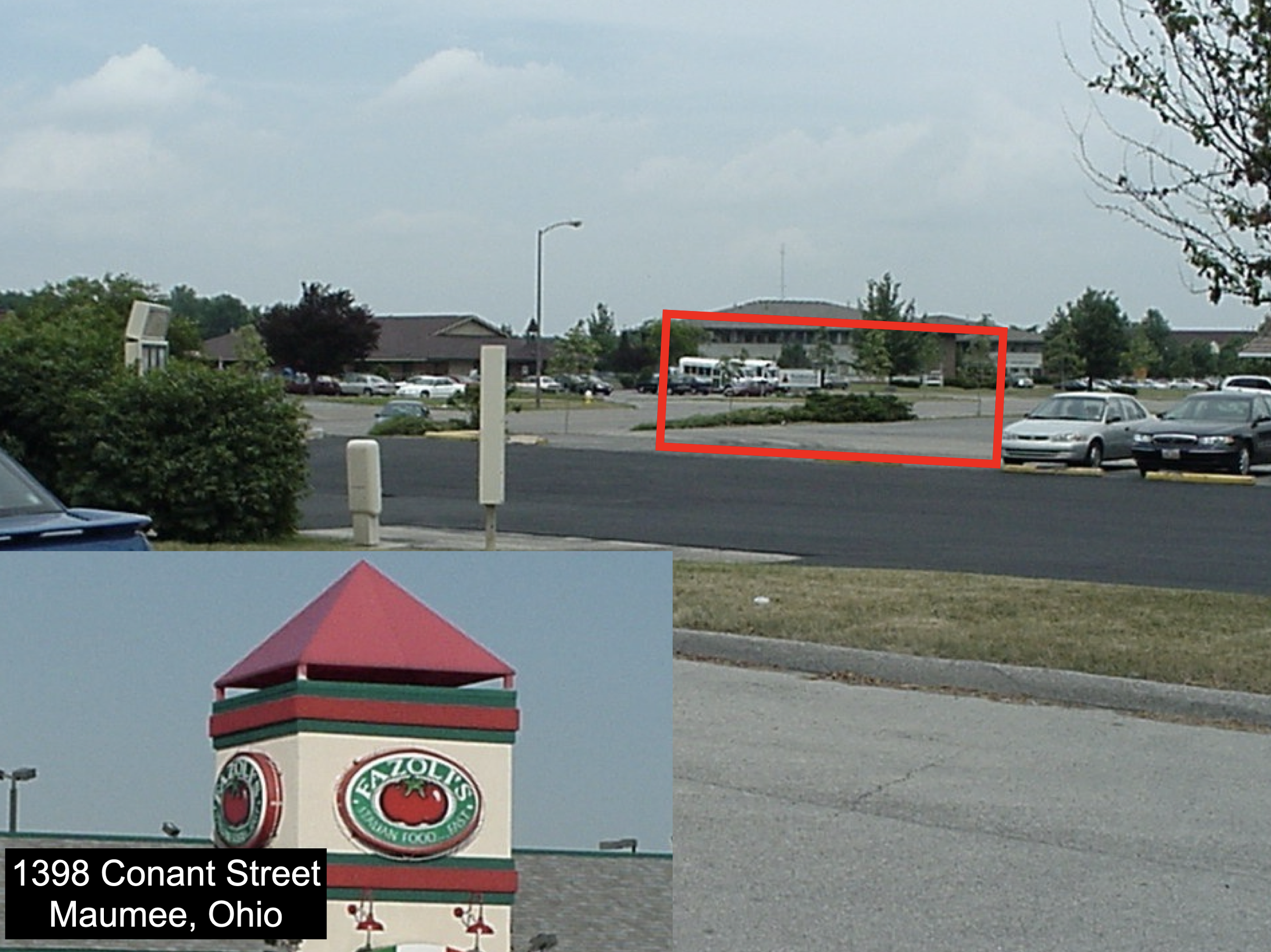 Officer Roberts initiated a traffic stop of Mr. Weisner.  He walked me to the exact spot, which is identified by the light asphalt.

On his first approach, Officer Roberts smelled a strong odor of an alcoholic beverage on or about his person.  He directed Mr. Weisner to step out of the car and complete field sobriety tests [FST’s].  Mr. Weisner failed the FST’s and was placed under arrest for Operating a Motor Vehicle While Under the Influence [OMVI].  [Note: At the time in Ohio, the criminal charge was OMVI.]  Mr. Weisner was read the Ohio BMV 2255 and submitted to a breath test which resulted in a .185 BAC.  Mr. Weisner filed a Motion to Suppress alleging that Officer Roberts did not have probable cause to stop his vehicle.  That motion was overruled, and he was convicted of OMVI.  He appealed to the State of Ohio Sixth District which overturned the conviction and the City of Maumee appealed to the Supreme Court of Ohio which held “[A] telephone tip can, by itself, create reasonable suspicion justifying an investigative stop where the tip has sufficient indicia of reliability.” Id at 296

Does your agency train on Citizen Tips?