Did Partiers at Peaches’ Create Probable Cause or Create Plaintiffs?

Peaches had strippers in g-strings, a naked prostitute on a mattress and an unsuccessful oral contract.

As late Saturday night became early Sunday morning on March 16, 2008, Mr. Theodore Wesby and his friends now known as “co-Respondents” in this legal case were partying at 115 Anacostia Avenue Northeast, Washington D.C. and this is where the trouble began.

Neighbors called the District of Columbia Metropolitan Police Department about the party, reporting that the house was supposed to be vacant, and had been vacant for several months. They also reported illegal activities at the party. Officers arrived at the home around 1:30 a.m. Through a first-floor window, they saw one of the partiers inside run upstairs at the sight of their approach. When the officers knocked and entered through the front door, others also scattered into different rooms. After searching the home, Officers Andre Parker, Anthony Campanale and other officers found twenty-one persons inside, including a man hiding in a closet. Another stayed in a bathroom after officers “bang[ed]” on the door, until they pushed it open. Gathering the partiers, the officers observed evidence of activity that indicated “conducted in strip clubs for profit.” was ongoing.  Several women had been conducting “lap dances” and were “dressed only in their bra and thong with money hanging out [of] their garter belts.”  One of the partiers told Officer Campanale that a woman had been “selling sex” upstairs, where police found some men and a naked woman. The officers found open condom wrappers and a used condom on the window sill. There was marijuana odor throughout the home.  The home had just one mattress on the floor upstairs and some folding chairs but no other furniture. 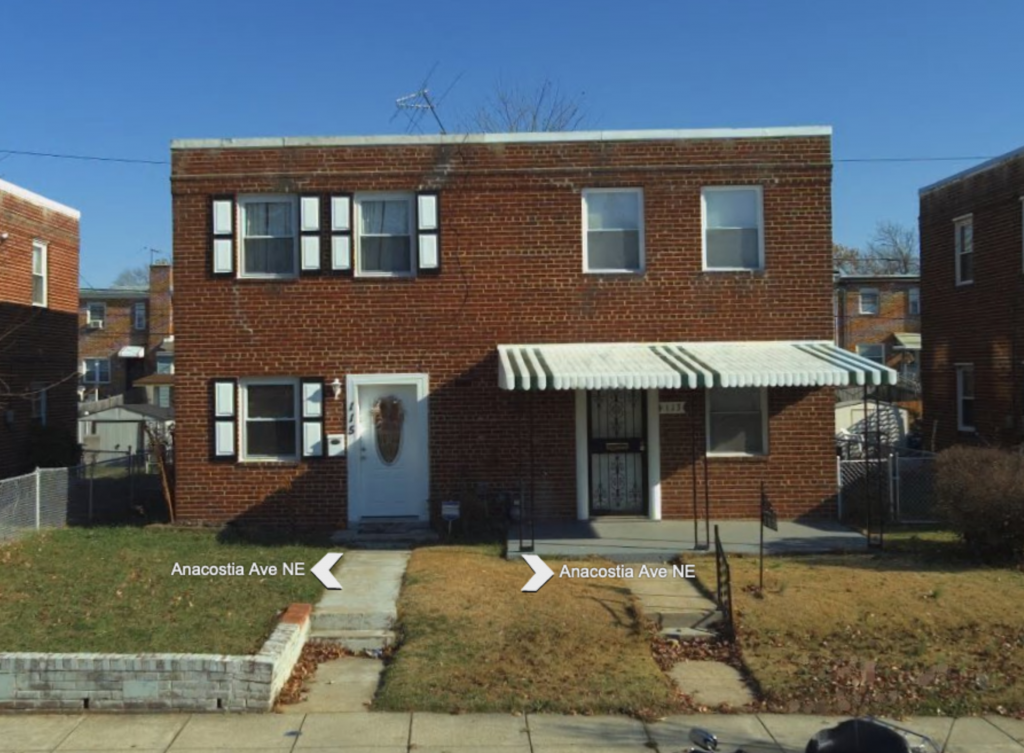 Peaches Party was held here at 115 Anacostia Avenue Northeast, Washington D.C., which is the left half of the double.  This is an 800 Square Foot residence where twenty-one people were partying when Washington DC Metro Police arrived.

Although the electricity and the plumbing had not been disconnected, the house was dark during the party, with candles lit beside the mattress. Sergeant Andre Suber and several other officers on the scene gathered information and interviewed all persons present. When officers asked for information about the homeowner, the partiers had no answer. Several eventually said that they had been invited by other people, and some said that a woman whose real name they did not know—identified as “Peaches” (or sometimes “Tasty”) had been there previously and had given them permission to be in the home. Spoiler alert – Peaches a.k.a. Tasty has yet to be identified by her real name.

Peaches was not present when police arrived. Officers took the time to further investigate. They called Peaches on the phone several times but she was “evasive” and repeatedly hung up. She refused to come to the scene, explaining that she would be arrested if she did so. Peaches asserted that she had told the partiers they could use the home. She also initially claimed to police that the owner had given her permission to use the home and that she was “possibly” renting it from him. Soon, though, Peaches admitted to police that, contrary to her initial claim, she lacked the owner’s permission to use the home. Officers also spoke with the homeowner, a Mr. Damien Hughes, who confirmed that no one, including Peaches, had permission to be there. Mr. Hughes stated that he and Peaches had tried, but failed, to reach a lease agreement. Mr. Hughes did not indicate if the lease agreement sought was an oral contract.

Based on all of this information, Sergeant Suber directed that the partiers be arrested for trespassing. He had previously kept his watch commander, who was not on scene, informed of the situation, and she approved of his decision to arrest. At summary judgment, Officer Parker did not recall placing anyone under arrest, while Officer Campanale did not recall the identity of anyone he arrested. After the arrestees were transported to the police station, the watch commander on the next shift decided that they should be charged instead with disorderly conduct, even though Sergeant Suber physically “provided him with the D.C. code of the unlawful entry statute.” Prosecutors later decided not to pursue charges.

The District Court held that the officers and agency violated 42 U.S.C. § 1983, the Respondents’ Fourth Amendment rights because the officers lacked probable cause and made false arrests.  The court awarded the partiers $680,000.00, which may have provided a significant number of dollar bills for Peaches’ next party.  The District of Columbia appealed and the Circuit Court upheld the District Court and damages.  The District of Columbia appealed again to the U.S. Supreme Court which held “Our conclusion that the officers had probable cause to arrest the partygoers is sufficient to resolve this case … [and] The officers were thus entitled to summary judgment based on qualified immunity.”. [emphasis added] Id at 589 and 593.

Consequently, the Partiers at Peaches created Probable Cause and not Plaintiffs.  Oh, and the $680,000?  Well the since there was probable cause the partiers received nothing.  Only two questions remain … where is Peaches next party and where will the partiers get their dollar bills?

As the officers arrive people scramble, leave the house, lock themselves inside of a bathroom, the house smells like weed, there are strippers in the living room, complete with dollar bills hanging from their g-strings.  Upstairs there is a mattress on the floor with a naked woman splayed on it with both used and unused condoms in close proximity.  With all of these circumstances the officers make a decision to arrest everyone for Criminal Trespass, but the chain of command says no and changes the charges from Trespass to Disorderly Conduct.  The prosecutor drops the Disorderly Conduct charges and the partygoers turn into plaintiffs and sue the agency and officers.  What. A. Mess. Ultimately the U.S. Supreme Court has to determine if Peaches aka Tasty had legal authority to host the stripper and DNA exchange party in a vacant home.  Thankfully the court held the officers did have probable cause and were entitled to Qualified Immunity.

So the lesson is that the officers did a very good job at identifying that the partygoers knew or should have known there were in a vacant home.  Some at the party said it was a bachelor party.  But of course, the actual bachelor could not be identified.  Documentation of officers’ actions can be very critical, such as in this case, where each salient fact had impact on a probable cause case that made it all the way to the U.S. Supreme Court.