A Facebook Photo Helps Establishes Probable Cause … But was it Enough to Search the Curtilage Without a Warrant?

On June 4, 2013, Officer Matthew McCall of the Albemarle County, Virginia Police Department was patrolling on Route 29 near the border of Albemarle County and the City of Charlottesville when he observed a traffic infraction by the operator of an orange and black motorcycle with an extended frame. Officer McCall activated his emergency lights and attempted to stop the motorcycle, but the motorcycle eluded him at a high rate of speed.

Several weeks later, on July 25, 2013, Officer David Rhodes, also of the Albemarle Police Department, was in his police car on the Route 250 Bypass when he observed an orange and black motorcycle traveling at 100 miles per hour in a 55-mph zone. Officer Rhodes engaged his emergency equipment and pursued the motorcycle. Instead of stopping, the motorcyclist increased his speed to at least 140 mph and sped away from the police car. In the interest of safety, Officer Rhodes abandoned his pursuit. However, Officer Rhodes’ police car video camera recorded the incident, and police were able to use this footage to obtain a still photograph of the motorcycle, including its license plates.

The motorcycle was an orange and black Suzuki with chrome accents and a “stretched out” rear wheel, indicating that it had been modified for drag racing. Officer Rhodes could not identify the driver through the darkly tinted helmet, but he observed that the motorcyclist wore blue jeans and “tan Timberland-type work boots.” The motorcyclist who eluded Officer McCall two months earlier also wore jeans and “Timberland-type-style boots.” After comparing notes and identifying “an awful lot of similarities” between the two eluding incidents, Officers McCall and Rhodes concluded the same motorcyclist had eluded each of them.

On September 10, 2013, Albemarle Police responded to the Virginia Department of Motor Vehicles to investigate an unrelated matter involving Mr. Collins. Upon hearing Mr. Collins’ name on the police radio, Officers Rhodes and McCall also responded to the DMV to question Mr. Collins since he was a suspect in the motorcycle eluding incidents. Officer McCall advised Mr. Collins of his Miranda rights, and Mr. Collins agreed to speak to the officers. When questioned about the motorcycle, Mr. Collins denied knowing anything about it, and told the officers that he “hadn’t ridden a motorcycle in months.” Meanwhile, Officer Rhodes searched a Facebook and found two photographs posted on Mr. Collins’ Facebook page depicting the motorcycle which appeared to have been involved in the eluding incidents. The photographs showed the orange and black motorcycle parked in a driveway next to the vehicle Mr. Collins was attempting to register at the DMV.

The record indicates that police arrived at the DMV after receiving a report that Mr. Collins was attempting to register a stolen silver Acura.  Mr. Collins had allegedly forged the title to the Acura in an attempt to reduce the taxes on the vehicle, but the forgery charge was subsequently dismissed and is not relevant to this appeal.

After the questioning concluded, Mr. Collins left the DMV and the officers continued their investigation. Officer Rhodes learned from an informant that the house in the Facebook photograph was located at 2304 Dellmead Lane, Charlottesville, Virginia. Less than half an hour later, Officer Rhodes located the house and parked along the street. From his position on the street, Officer Rhodes could see what appeared to be a motorcycle covered with a white tarp. At trial, Officer Rhodes testified that “a quarter of the wheel [was] sticking out from underneath the cover” and that despite the tarp, he recognized the distinct chrome accents and “stretched out” shape of the motorcycle. Additionally, the location and angle of the partially covered motorcycle matched that of the motorcycle in Collins’ Facebook photographs.

This is 2304 Dellmead Lane, Charlottesville, Virginia where the U.S. Supreme Court determined that part of the driveway was curtilage. 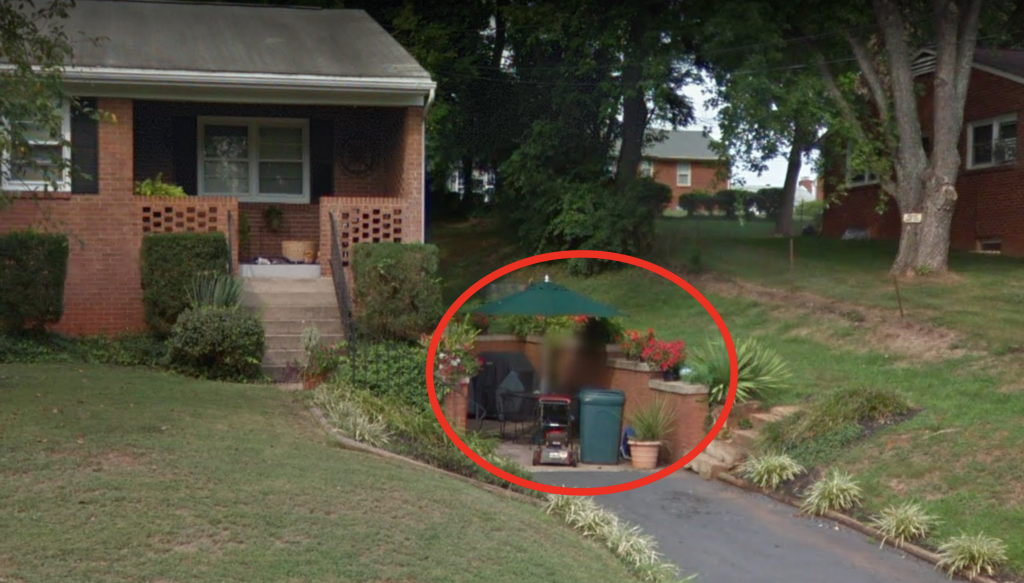 The walkway to the front door leads left before the area where the motorcycle was parked and underneath a tarp.  That area is beyond the lawnmower and garbage can near the table tent.  This is the exact area that the U.S. Supreme Court held as curtilage and protected by the Fourth Amendment.

Shortly thereafter, a vehicle dropped off Mr. Collins at 2304 Dellmead Lane. Officer Rhodes returned to the house and knocked on the door, which Mr. Collins answered. Although it was “over 90 [degrees] that day,” Collins came to the door dressed in jeans, a sweatshirt, and Timberland-style boots. When asked about the motorcycle, Mr. Collins initially said he “didn’t know anything about it.” He then told Officer Rhodes it belonged to a friend. Eventually, Mr. Collins admitted that he purchased the motorcycle, without a title, from Mr. Eric Jones.

A bench trial was held, and he was convicted of Receiving Stolen Property.  Mr. Collins appealed to the Virginia Court of Appeals and the Virginia Supreme Court.  Both courts upheld the conviction, so he again appealed to the U.S. Supreme Court which held “[W]e conclude that the automobile exception does not permit an officer without a warrant to enter a home or its curtilage in order to search a vehicle therein.”.

Here, the motorcycle was parked beyond the walkway to the front door.  The court reasoned that went beyond the area a visitor would access and would be considered curtilage.

Does your agency train on Curtilage?