A Liar, Truthteller and Methamphetamine

When asked why the liar lied, she replied “In case things went bad.”.  It did go bad, U.S. Supreme Court bad, to be specific.

“Neither Ross nor the historical evidence it relied upon admits of a distinction based on ownership … [P]olice officers with probable cause to search a car may inspect passengers’ belongings found in the car that are capable of concealing the object of the search. The judgment of the Wyoming Supreme Court is reversed.”.

On Sunday July 23, 1995 at 1:00 a.m., a Wyoming Highway Patrol Officer Robert Baldwin stopped a 1977 Cadillac for speeding and driving with a faulty brake light. There were three passengers in the front seat of the car: the driver, Mr. David Young, his girlfriend Ms. Vanessa McQueery, and Ms. Sandra Houghton. On first approach Officer Baldwin observed a hypodermic syringe in Mr. Young’s shirt pocket. Officer Baldwin left the occupants under the supervision of two backup officers as he went to get gloves from his patrol car. On second approach Officer Baldwin instructed Mr. Young to step out of the car and place the syringe on the hood. Officer Baldwin then asked Mr. Young why he had a syringe; with refreshing candor, Mr. Young replied what Officer Baldwin already knew, he used it to take drugs.

At this point, the backup officers ordered the two female passengers out of the car and asked them for identification. Officer Baldwin asked their names and one stated her name was Ms. McQeery the other falsely identified herself as Sandra James and that she did not have any identification. She had no identification because she was not Sandra James but actually Ms. Sandra Houghton. 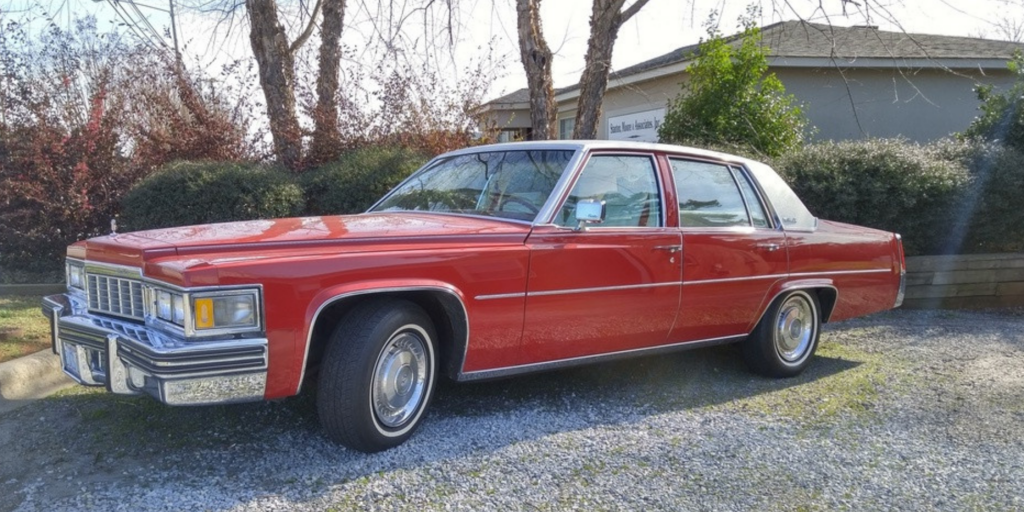 Mr. Young was driving a 1977 Cadillac and was stopped by Officer Baldwin for speeding and a faulty brake light.  Mr. Young’s Cadillac was similar to the one in this photo.

Officer Baldwin searched the passenger compartment. On the back seat, he found a purse, which Ms. Hougton claimed as hers. He removed from the purse a wallet containing Ms. Houghton’s actual driver’s license, identifying her as Sandra K. Houghton. When Officer Baldwin asked her why she had lied about her name, foreshadowing, she replied, “In case things went bad.”

Continuing his search of the purse, Officer Baldwin found a brown pouch and a black wallet-type container. Ms. Houghton denied the brown pouch was hers and had no idea how it was in her purse. This brown pouch contained drug paraphernalia and a syringe with 60 ccs of methamphetamine.  Ms. Houghton admitted ownership of the black wallet, which was also found to contain drug paraphernalia, and a syringe with 10 ccs of methamphetamine an amount insufficient to support the felony conviction at issue in this case. Officer Baldwin observed fresh needle-track marks on Ms. Houghton’s arms and she was placed her under arrest. I do give Ms. Hougton credit that she knew which of the two containers contained the felony and misdemeanor amounts of methamphetamine and claimed the misdemeanor container was her own.

Ms. Houghton a.k.a. Sandra James was convicted at trial and appealed to the Wyoming Supreme Court which overturned her conviction.  The State of Wyoming appealed, and the U.S. Supreme Court held “Neither Ross nor the historical evidence it relied upon admits of a distinction based on ownership … [P]olice officers with probable cause to search a car may inspect passengers’ belongings found in the car that are capable of concealing the object of the search. The judgment of the Wyoming Supreme Court is reversed.”. Id at 302, 307.