One Headlight Two Joes and Three Stolen Checks totaling $202.02 Lead to THE Most Important Consent Case

On Tuesday January 31, 1967 in Sunnyvale, California at 2:40 a.m. Police Officer James Rand observed an automobile traveling at him with one headlight. He made a U-turn and then observed its license plate light was burned out. There were six men in the vehicle. At 2:40 a.m. anywhere this creates a level of suspicion. Joe Gonzales was the drive and Joe Alcala and Robert Bustamonte, were in the front seat. Three unidentified older men were seated in the rear. Officer Rand asked Mr. Gonzales for his license he stated he did not have one.  Officer Rand asked if any of the other five had any evidence of identification. Only Mr. Alcala produced a license, and he explained that the car was his brother’s. As is common today, the only licensed driver in the car was not driving.  Officer Bissell and Captain Crabtree arrived, and all six occupants were removed from the car.  Officer Rand asked Mr. Alcala if he could search the car and he replied “Sure, go ahead.”.  Testimony revealed that none of the occupants were blocked in, the officers did not intimidate the men and no threats, to include arrest, were made.  After Mr. Alcala gave consent, Officer Rand and Captain Crabtree searched the car while Officer Bissell watched over the six men standing near.  Wadded up under the left rear seat [a 1958 Ford Sedan would have open space under the rear seats] three Speedway Car Wash checks each payable for $67.34 and ‘signed’ by Charles Kehoe were discovered.  One was payable to Robert Gomez and two were payable to Jino Anthony.  Mr. Gonzales was cited for the inoperable headlight, inoperable light over rear plate and no driver’s license.

An investigation discovered that on Thursday January 19, 1967 the Speedway Car Wash was burglarized in Mountainview, California which is the next city to the North and West of Sunnvale, California.  Several items were stolen in the burglary to include blank checks and a check writing machine known as a Check Protector. Det. John Tomac crafted one search warrant that included a 1956 Oldsmobile bearing CGN 877 at 622 North Bayview Avenue, Sunnyvale California and a 1960 Renault bearing SCN 462 at 2780 El Camino Real, Santa Clara, California. Stolen checks and the Check Protector were found inside of the Oldsmobile and stolen checks were found inside of the Renault; all were stolen from the Speedway Car Wash in Mountainview, California.  Today, a separate search warrant for each location would be required. 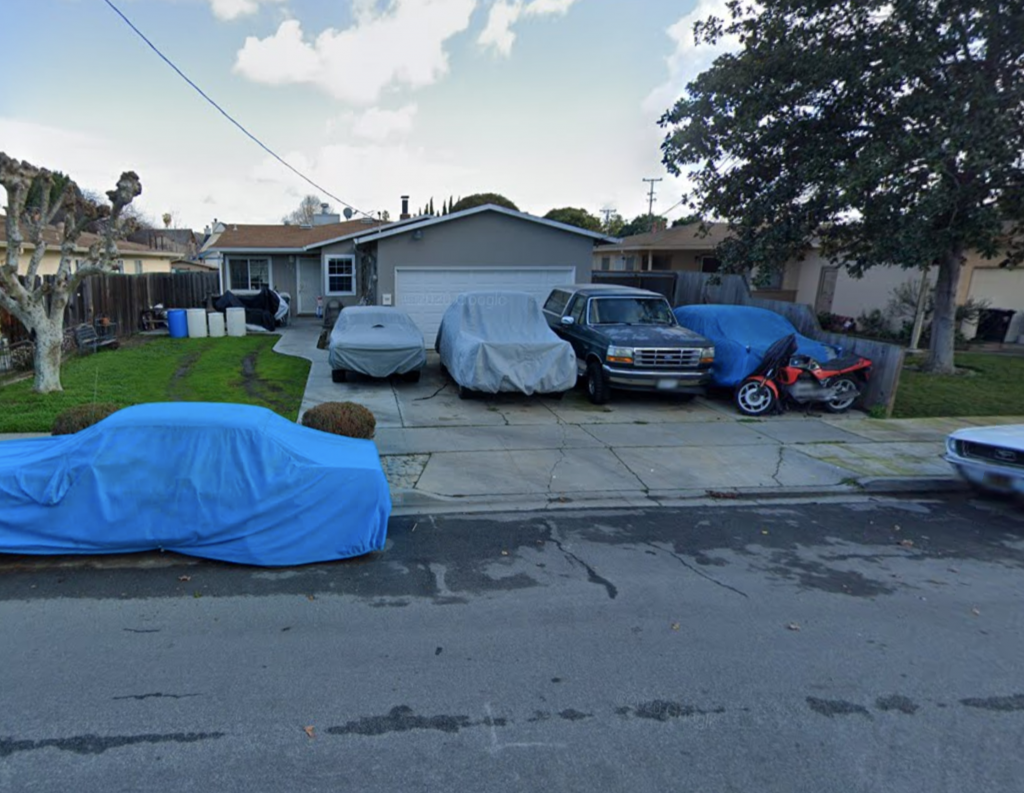 A search warrant was served on a 1956 Oldsmobile bearing CGN 877 at 622 North Bayview Avenue, Sunnyvale California.  This is a modern day photo of the address where the check protector – a check writing machine of the 1960’s was found inside the Oldsmobile.

Mr. Bustamonte was tried and convicted in the California trial court.  His conviction was upheld by the California Appeals Court.  The California Supreme Court denied his appeal.  Once imprisoned he filed a Writ of Habeas Corpus seeking release.  The Federal District Court denied his request, but the Ninth Circuit Court of Appeals accepted his case and overturned his conviction on the grounds of that Mr. Alcala’s consent was not voluntary because he was not informed of his right to refuse.  The U.S. Supreme Court accepted the case.  Oral arguments were heard on October 10, 1972 and on May 29, 1973 they held in a six to three vote “Voluntariness is a question of fact to be determined from all the circumstances, and while the subject’s knowledge of a right to refuse is a factor to be taken into account, the prosecution is not required to demonstrate such knowledge as a prerequisite to establishing a voluntary consent.”. Id at 248 – 249.

Does your agency train on the doctrine of Consent?