On Thursday April 28, 2016 Douglas County, Kansas Deputy Mark Mehrer observed a 1995 Chevrolet 1500 pickup bearing Kansas 295 ATJ.  Dep. Mehrer ran the tag, by way of his in-cruiser computer and the tag registered to Mr. Charles Glover Jr.  Mr. Glover’s license had been revoked by the State of Kansas.  Based solely on this license check, Dep. Mehrer conducted a traffic stop on the pickup.  Upon first approach Dep. Mehrer immediately recognized Mr. Glover from previous encounters.  He greeted him by name and Mr. Glover quickly asked for the deputy to give him a break[1].  Dep. Mehrer charged Mr. Glover with Kansas Statute § 8-285 Habitual Violator.  To be convicted of this statute, the violator must have been convicted of several offenses three times; one of which was no operator’s license. 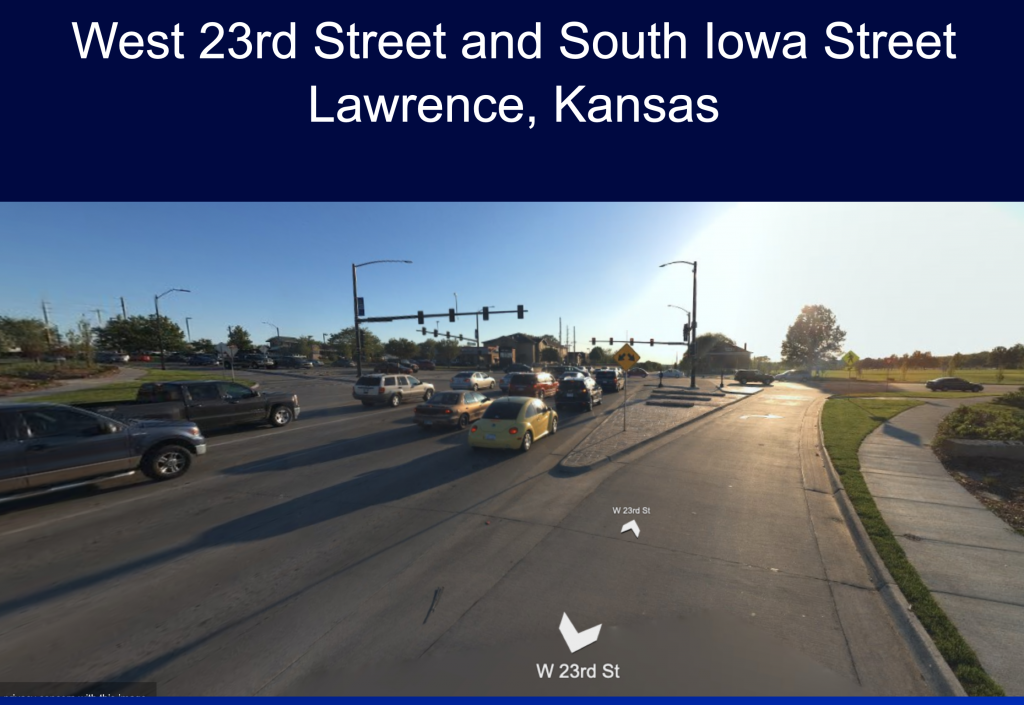 This was the traffic light in Lawrence, Kansas that Deputy Mark Mehrer observed Mr. Glover’s 1995 Chevrolet 1500 pickup bearing Kansas 295 ATJ when the deputy decided to run the license plate.

The entry level court in Kansas called a District Court, granted the motion to suppress to Mr. Glover, holding that the stop lacked reasonable suspicion.  The state appellate court overturned the motion in the state’s [deputy’s] favor and the Kansas Supreme Court overturned the appellate court [Glover’s favor].  The State of Kansas appealed to the U.S. Supreme Court which overturned the Kansas Supreme Court, holding that the deputy did have reasonable suspicion to stop the pickup truck.  Surprisingly, this was an 8-1 decision with Justice Sonia Sotomayor as the lone dissenter.  She stated in pertinent part “The consequence of the majority’s approach is to absolve officers from any responsibility to investigate the identity of a driver where feasible.”. [J. Sotomayor dissent]

This is an exceptional case because the U.S. Supreme Court conducted a detailed examination on the doctrine of Reasonable Suspicion.  The court had to determine if a law enforcement officer’s conclusion to stop a vehicle based on information obtained solely from running the license plate reached the level of the Reasonable Suspicion doctrine.   The court specifically recognized that even though the owner is not always the driver, law enforcement could rely on the information obtained to stop the vehicle and it would not diminish Reasonable Suspicion “The fact that the registered owner of a vehicle is not always the driver of the vehicle does not negate the reasonableness of Deputy Mehrer’s inference.”. Id at 4.

The court in this case, provided a look back at many different cases on how it has defined Reasonable Suspicion through the years and is instructive for a review:

Although a mere ‘hunch’ does not create reasonable suspicion, the level of suspicion the standard requires is considerably less than proof of wrongdoing by a preponderance of the evidence, and obviously less than is necessary for probable cause.” Prado Navarette v. California, 572 U. S. 393, 397 (2014) (quotation altered); United States v. Sokolow, 490 U. S. 1, 7 (1989).

Because it is a “less demanding” standard, “reasonable suspicion can be established with information that is different in quantity or content than that required to establish probable cause.” Alabama v. White, 496 U. S. 325, 330 (1990).”

Rather, they must permit officers to make “commonsense judgments and inferences about human behavior.” Ibid.; see also Navarette, supra, at 403 (noting that an officer “‘need not rule out the possibility of innocent conduct’ ”).

[W]e have stated that reasonable suspicion is an “abstract” concept that cannot be reduced to “a neat set of legal rules,” Arvizu, 534 U. S., at 274 (internal quotation marks omitted) and we have repeatedly rejected courts’ efforts to impose a rigid structure on the concept of reasonableness, ibid.; Sokolow, 490 U. S., at 7–8.

This case is yet another example that law enforcement truly IS the hardest job in America!